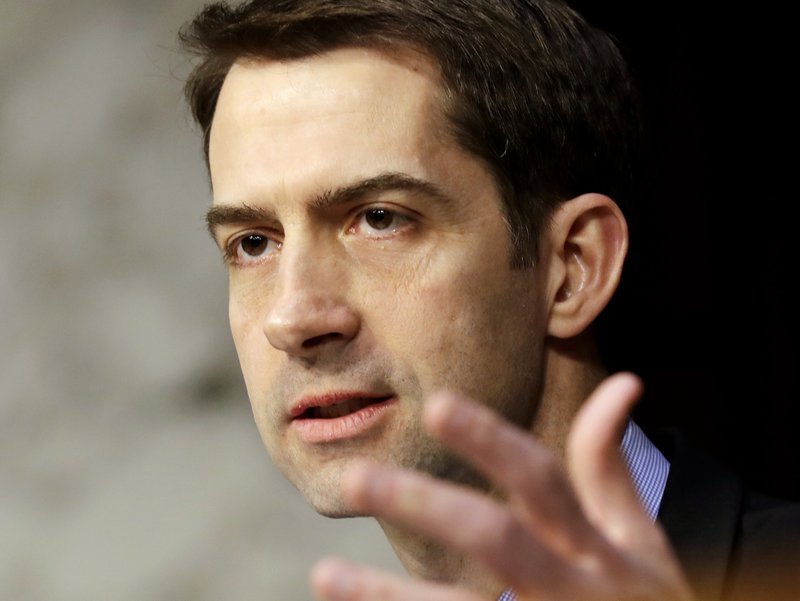 WASHINGTON -- Members of the all-Republican Arkansas congressional delegation Wednesday welcomed an apparent de-escalation of hostilities between Iran and the United States.

They also voiced relief that the previous day's Iranian missile attack had claimed no American lives.

"I certainly don't think that the world is served by having a major outbreak of war between this country and Iran," said U.S. Rep. Steve Womack of Rogers.

If U.S. troops or civilians had been harmed by the Iranian barrage, this would be "a much different situation," he added.

The decision to take out top Iranian military commander Qassem Soleimani fueled anger in Tehran as well as Iraq, the site of the targeted killing.

But the move by President Donald Trump may deter Iran from fomenting violence elsewhere in the region, Womack said.

"I applaud the president for the action that he took, and I think the limited response by Iran convinces me that they've received the message," Womack said.

"It helped me to go to the classified briefing and get the back story," he said.

Soleimani had sowed misery across the region and was plotting additional bloodshed, and his fate was fitting, Westerman said.

"Whatever he got was probably better than he deserved," he said. "We did the right thing."

Soleimani's death can be a turning point -- for the better -- in U.S.-Iranian resolutions, lawmakers suggested.

"This morning, the President sent a clear and firm message to Iran that peace and friendship is theirs if they choose," he said in a written statement. "I am confident that the President will continue to use all the tools at his disposal to deescalate the situation and seek peace for everyone in the region."

Iran is capable of igniting a war with the U.S. but is ill prepared to win one, U.S. Sen. Tom Cotton of Dardanelle said.

"As I've said all along, if Iran wants to start a fight, the United States will end it," Cotton said in a written statement. "I suspect that Iran's weak attacks on sand dunes at two of our bases in Iraq are a signal that the fight ended when we killed Qassem Soleimani, and that the mullahs are running scared."

The White House, U.S. Sen. John Boozman said, sent "a clear message to the regime that its hostile actions will no longer be tolerated."

In a written statement, the lawmaker from Rogers said Trump is turning up the pressure on Iran.

"By imposing additional economic sanctions, the president has again demonstrated our commitment to firmly countering the regime's destructive, destabilizing behavior while encouraging peace," he said. "It is in Iran's best interest to de-escalate the tensions, abandon its nuclear ambitions and stop sponsoring terror."

"This morning, President Trump reiterated that the United States does not seek to start a war with Iran, [but] his recent actions have sent an unambiguous signal to Tehran and their proxies that if they harm America, there will be a high price to pay," he wrote.

Back in Arkansas, activists announced plans for an anti-war protest.

Members of Indivisible Little Rock and Central Arkansas said they plan to rally in Little Rock early next week and then hand-deliver letters to Boozman's and Cotton's offices.

"We're going to be on Monday asking our senators to pass a resolution ordering Trump to halt all hostilities with Iran," said organizer Loriee Evans.

The measure faces widespread Republican opposition, including from Womack.

"Their purpose is political. Their purpose is to tie the hands of the president," he said. "I just think it's a bad idea, and it'll go absolutely nowhere in the Senate."

"I am relieved that our military men and women are not heading to war and that their families can hopefully rest well as a result," said state Sen. Joyce Elliott, who hopes to unseat Hill in Arkansas' 2nd Congressional District. "Going forward, I pray both President Trump and the Iranian leadership will relentlessly seek a diplomatic resolution rather than one of war."

Celeste Williams, Womack's Bella Vista-area challenger in the 3rd Congressional District, said the U.S. should work with like-minded nations and not make rash decisions on its own.

"When we take unilateral action, without notifying our allies, we unnecessarily place our soldiers and diplomats at risk," she said. "We need to give careful deliberation as to how we utilize our precious national resources. We cannot continue endless wars."