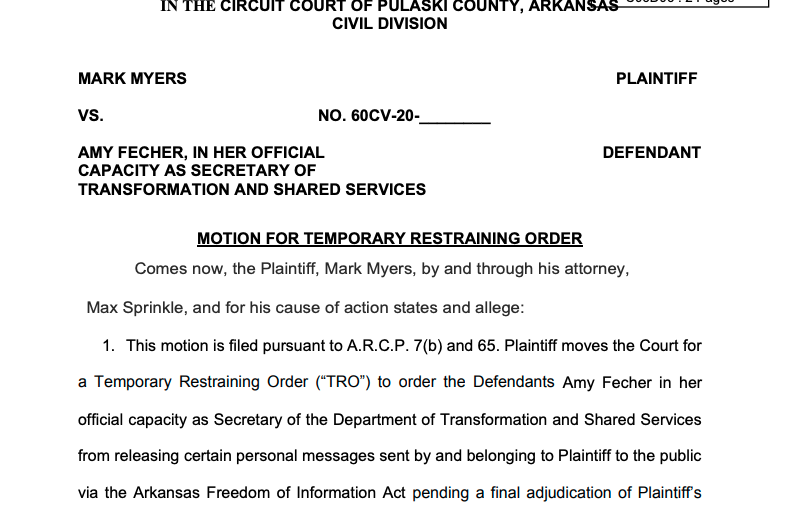 This screenshot shows part of a lawsuit filed Thursday by Mark Myers.

A former state agency director Thursday sued the Arkansas Department of Transformation and Shared Services secretary, asking a judge to block the release of messages he exchanged on his then-state-issued cellphone with a vendor's representative.

The messages, requested by the Arkansas Democrat-Gazette under the Arkansas Freedom of Information Act, are at the center of a personal relationship between former Department of Information Systems Director Mark Myers and a vendor's representative that raised questions a few years ago about three state projects with that vendor, totaling $8.2 million.

The Department of Transformation and Shared Services determined that the messages were public information, and it intended to release them to this newspaper. However, Myers appealed that decision to Arkansas Attorney General Leslie Rutledge, who declined to give an opinion late Wednesday.

Before the agency could release the messages, Myers filed the lawsuit in Pulaski County Circuit Court just before the close of business Thursday, asking the court to issue a temporary restraining order. Myers, in Thursday's motion, argued that he would be able to demonstrate that the messages were not public records.

"[Myers'] personal and professional reputation will be irreparably harmed by the release of the messages at issue in this dispute," Myers' attorney, Maximillan Sprinkle of Little Rock, wrote in a brief supporting a motion for a temporary restraining order.

Alex Johnston, a spokeswoman for the Department of Transformation and Shared Services, said the agency would file a response to Myers' motion, and it would wait to release the requested records until the matter is resolved in court.

"Out of an abundance of caution and in an effort not to violate a possible circuit court order, we are waiting on the judge's ruling on the motion for a temporary restraining order," Johnston said in a Thursday email.

Myers, who was appointed as the Department of Information Systems director by Gov. Asa Hutchinson in January 2015, resigned Nov. 23, 2016, at the governor's request, then-Hutchinson spokesman J.R. Davis said at the time. Davis called it "a personnel matter" and declined to elaborate. Myers' salary was $137,360 a year.

The personal relationship between Myers and the vendor's representative became public knowledge after a deputy legislative auditor told state lawmakers in June 2017 that it appeared that Myers violated standards of conduct in state law, potentially wasted state resources and failed to adhere to the department' technology policy, on the basis of a review of three projects costing $8.2 million.

At that time, Myers defended the three purchases in a letter distributed to lawmakers, saying the purchases were well below the prices the department could have paid for the equipment and that he didn't "exercise discretion in favor of another person due to any personal relationships, real or perceived."

After the audit was released in 2017, Davis said the governor "was made aware of the findings months ago and acted immediately and appropriately."

In June 2017, Arkansas Legislative Audit Legal Counsel Frank Arey denied this newspaper's request for the names of the vendor, the vendor representative and two resellers mentioned in the audit, citing an ongoing criminal investigation.

And in August 2017, Department of Information Systems General Counsel Anthony Black denied this newspaper's request for correspondence between Myers and any representative of Cisco Systems, citing Arkansas Code Annotated 25-19-105 (b) (6), which exempts undisclosed investigations by law enforcement agencies of suspected criminal activity.

Sources said the investigation had ended.

Assistant U.S. Attorney Allison Bragg on Thursday said the U.S. attorney's office cannot confirm an existing investigation or the end of an investigation.

In response to this newspaper's recent request for that information, Arey said an audit document identifies the vendor as Cisco; and the resellers as World Wide Technologies and Presidio.

The vendor representative, who could not be reached for comment by this newspaper in several attempts this week, "left Cisco in August 2017," said Helen Saunders, a spokeswoman for Cisco.

This newspaper recently requested the correspondence and the department provided more than 1,600 pages of emails and 400 text messages between Myers and Cisco representatives, including the vendor representative.

Johnston said there were 3,000 additional messages subject to this newspaper's request and Myers' lawsuit.

Sprinkle, the attorney who represents Myers, asked Rutledge to opine that additional messages were "private conversations had over a direct message application on Myers' state-issued blackberry" and are exempt from release under the Arkansas Freedom of Information Act.

In the request for a restraining order, Sprinkle wrote: "The plaintiff also asks the Court to balance his professional and personal reputation against the need for the public to gain immediate access to the Messages. The Plaintiff has not worked for the State of Arkansas in more than three years. All of the Messages in question are more than three years old. There would be no harm to the State or its citizens for the release of these messages to be delayed pending a review by the Court."

"The messages in question ... were obtained after Myers left employment with the state of Arkansas due to an investigation concerning certain procurements he was involved in," Sprinkle wrote in the Jan. 3 letter.

"The messages are personal and private communications between Myers and a personal friend," he said.

He said Myers concedes that an objective party could determine that some of the messages are releasable under the Freedom of Information Act because the friend also was a state vendor who did business with the then-Department of Information Systems.

"However, on the whole, the messages are mostly friendly banter and personal communications between two people," Sprinkle wrote in his letter to Rutledge.

"Most critically to Myers is the fact that the messages contain deeply personal exchanges, musings and information that could potentially create significant embarrassment to him and his acquaintance if they are made public," he said.

Another important factor is the then-Department of Information Systems traditionally did not keep this specific type of blackberry messages, Sprinkle said.

"They were stored on a server in which they were usually deleted automatically after 90-days," he wrote. "The messages were only retained for the sole purpose of an investigation into Myers after his employment ended. Said investigation did not uncover wrongdoing on Myers' part; and certainly, did not result in his termination or other adverse employment outcome."

Rutledge said in an advisory opinion dated Wednesday that it appears in this instance, the primary issue is not whether the messages are exempt from disclosure, but whether they meet the threshold requirement of being public records under the Freedom of Information Act.

"Making a determination whether a record is a public record is outside the scope of my statutory authority of review under Ark. Code Ann. 25-19-105 (c) (3) (B)," to determine whether the custodian's decision as to release personnel or evaluation records is consistent with the Freedom of Information Act, she said.

Robert Steinbuch, a University of Arkansas at Little Rock law professor, said that, theoretically, the messages could be shielded from the public because they are personal in nature.

Steinbuch said there's a balancing act weighing the personal nature of the messages against the public's interest in seeing the messages.

"Not salacious interest, but the public's legitimate interest," Steinbuch said.

Before being hired as information systems director, Myers was director of strategic initiatives for then-Secretary of State Mark Martin, a position he'd held since 2011. Myers was an honor graduate of the U.S. Army Signal School in May 2003 after being commissioned as a second lieutenant in the Army Reserve. As a major in the Reserves, he served two tours in Iraq and one in Afghanistan. He is the recipient of two Bronze Stars and three Army Commendation Medals.

He has a bachelor's degree in history from the University of Arkansas, Fayetteville.