As millions of animals die in continent’s conflagrations, some risk extinction by Karin Brulliard and Darryl Fears The Washington Post | January 10, 2020 at 2:42 a.m. 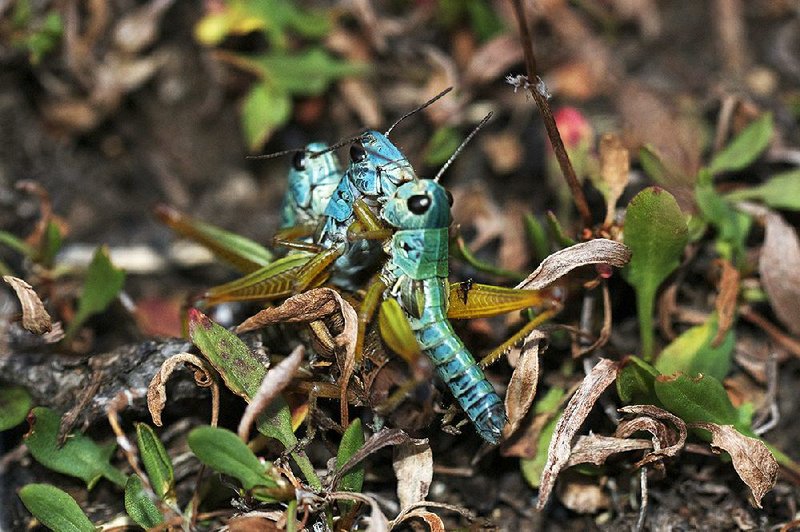 Australian alpine grasshoppers face off in Kosciuszko National Park in New South Wales in 2010. The situation for insects is every bit as dire as that of other animals threatened by wildfires, scientists warn.

The mouse-size dunnart is not as iconic as the koalas or platypuses that draw tourists, but it is arguably the most special mammal on Australia's Kangaroo Island.

Now the dunnart's days may be numbered. Before bush fires struck, it was already endangered, so rare that even researchers who studied them had never seen one. Now they fear they never will. One-third of the 1,700-square-mile island has burned, including the entire area where these dunnarts are known to live.

"One hundred percent -- all of our records since 1990 -- are within the burned fire scar. The entire range of the species has been burned," said Rosemary Hohnen, an ecologist who spent more than two years surveying the Kangaroo Island dunnart. "They're in true peril, real peril of extinction."

More than 1 billion mammals, birds and reptiles nationwide -- some of them found nowhere else on Earth -- may have been affected or killed by the fires sweeping across Australia, according to a University of Sydney estimate. The potential toll is far greater when other types of animals are included.

"We're not just talking about koalas, we're talking mammals, birds, plants, fungi, insects, other invertebrates, amphibians and bacteria and microorganisms that are critical to these systems," said Manu Saunders, a research fellow and insect ecologist at the University of New England in Armidale.

Individual animals might survive, but when their habitat is gone, "it doesn't matter," Saunders said. "They'll die anyway."

[Video not showing up above? Click here to watch » https://www.youtube.com/watch?v=gcEOgakqLNc]

Although dead and scorched koalas and kangaroos have become the symbols of wildlife suffering in the worst blazes ever to hit fire-prone Australia, conservationists note that koala populations are not at risk of extinction. A greater ecological concern are the unusual animals that could disappear from a continent with the world's highest rate of mammal extinction.

Among the most vulnerable are the long-footed potoroo, a marsupial that lives in damp forest habitat that scientists say may not recover from the fires, and the Kangaroo Island glossy black cockatoo, which eats nothing but the seeds of she-oak trees that have gone up in flames.

And then there are all the insects. They make up half of all animal biomass and are the major food source for virtually anything that moves. Bugs also break down organic matter and help pollinate plants. Inside branches, under leaves, within hollowed logs and in pockets on the ground, tens of millions of bugs are being burned alive. Some may vanish without ever being discovered.

"Only about 20 [%] to 30% of Australian insects are known to science," said Katja Hogendoorn, a researcher at the School of Agriculture, Food and Wine at the University of Adelaide.

A single bee species shows how grim the outlook is for many. Fires and land clearing had already driven the green carpenter bee to extinction in Victoria and South Australia. Now, said Hogendoorn, fires are threatening them on Kangaroo island.

The banksia plant, which the bees use for nests, have burned. It takes 30 years for it to grow to the right size and softness for the picky bees.

Federal agriculture officials say at least 100,000 cattle will die before the fires end. Farmers say their livestock are keeling over from burns. Cows have stopped feeding calves because their teats are scorched. An army of veterinarians has been assembled to assess those left standing. They're also weighing how to dispose of the dead.

Animals that survive may struggle to find food in an ashen landscape devoid of plants that provide nutrients or shelter. Without trees to nest in, birds may fail to breed. Prey, including insects, may be scarce.

The situation looks even more dire for Kangaroo Island dunnarts. They've been detected just 48 times since their discovery in 1969, and they've been seen only in a small western pocket of the island since 1990, Hohnen said.

Last week, Kangaroo Island Land For Wildlife, which works with private landowners to protect the dunnarts, said many of the remote cameras it uses to monitor the marsupials were "melted" by fires. On Wednesday, though, the group said some photos of survivors were captured, offering a bit of hope for the species.