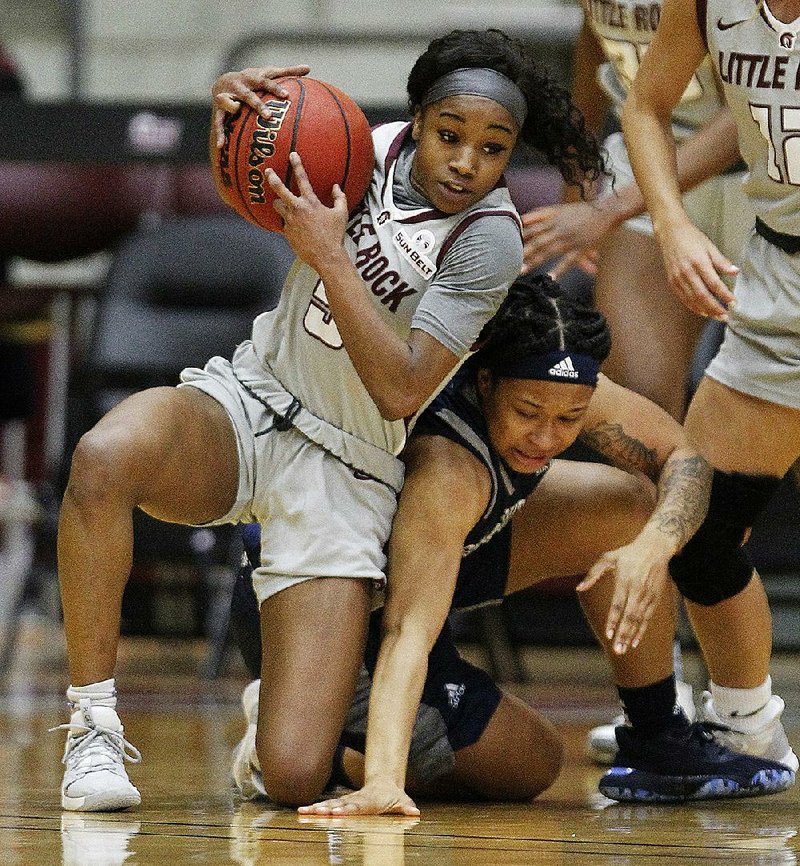 There are times when University of Arkansas at Little Rock women's basketball Coach Joe Foley still finds his team in a rut. Like on Thursday night at the Jack Stephens Center in Little Rock, when the Trojans managed just seven points on 2-of-19 shooting in the opening quarter.

Then there are other times when Foley's Trojans look like the promising team he's hoping will continue to develop, like during Thursday's third quarter when the offense is clicking, everyone is getting involved and shots are falling. Such inconsistent spurts often characterize young teams, and Foley's club is young and not very deep.

"We've already went through growing pains. Every game we go out there, there's gonna be something learned," Foley said. "So they just need to enjoy it, play hard, and if we win, that's a big plus. That was a big win for us right there."

The Trojans extended their conference home winning streak to 37 games, as they opened a four-game homestand after splitting their first two Sun Belt games on the road. Just two members of UALR's roster have been a part of all 37 of those victories -- senior guards Kyra Collier and Sydney Chastain.

Collier, who's the league's fourth-leading scorer, entered the game with some history on the line, sitting 10 points shy of 1,000 career points.

Her game-high 16 points -- including 13 in the second half -- on 7-of-18 shooting put her over the top, as the North Little Rock High product became the eighth player in program history to log 1,000 career points and 500 career rebounds, the latter mark she reached in UALR's previous outing at Texas-Arlington on Saturday.

"Means she's a heck of a player," Foley said. "To score 1,000 points, she's gonna get a lot of shots, there's no doubt, but you understand, they're putting their best defensive player on her every game now."

Collier's jumper with 8:45 remaining in the fourth quarter was the milestone-clinching bucket, as the Trojans grabbed a 47-33 lead. Minutes later, during a timeout at the 4:16 mark, the public-address announcer informed the announced Stephens Center crowd of 516 of what Collier had achieved, and the crowd gave a standing ovation.

"It's a great thing to do," Collier said. "It's a blessing, I'm grateful for it, but we're just focused on the next game."

Georgia Southern played 13 players, but none of them sniffed double figures. Three players tied for a team-high 6 points, and 30 of Georgia Southern's 46 points came from its bench.

The Trojans held Georgia Southern to 2-of-18 shooting from beyond the three-point line and forced the Eagles into 25 turnovers, which UALR turned into 23 points.

Both teams got off to rocky starts in the opening quarter, but it was the Trojans who suffered the most. UALR's offense struggled to 11% shooting, and Georgia Southern, which wasn't much better offensively, grabbed a 10-7 lead.

After outscoring the Eagles 14-11 in the second quarter, UALR went into halftime tied 21-21.

And then the Trojans started to find their offense.

Knapp helped jump-start UALR when she opened the third quarter with three consecutive buckets. Then later in the quarter, Collier, after scoring 3 points and going 1 of 4 from the field and 1 of 4 from the foul line in the first half, began to show life.

She knocked down a jumper from the right baseline with 1:51 left, then moments later stole the ball on the other end and turned it into a fastbreak layup, putting UALR up 38-29. Then, in the closing seconds of the quarter, Chastain drilled a three-pointer with the shot clock about to expire, and the Trojans took a 42-31 lead into the fourth. After a 27-27 tie at the 7:19 mark, UALR closed the third quarter on a 15-4 run.

"We were kind of dragging [in the] first half and not really doing too much," Collier said, "so we kind of changed our offense up some and locked in on that, and stayed locked in on the defensive end."

UALR led by as many as 14 early in the fourth quarter, but Georgia Southern stayed in it. Guard Mya Burns' three-pointer with 6:55 left trimmed the deficit to 49-43, but UALR closed the game on 9-3 run to seal it. 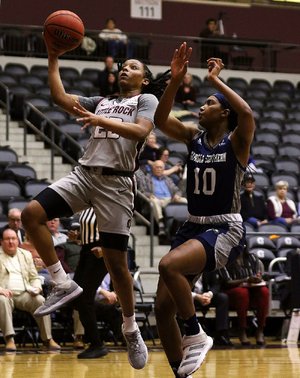 Photo by Thomas Metthe
UALR’s Kyra Collier (left) goes up for a layup in front of Georgia Southern’s Mya Burns on Thursday during the Trojans’ 58-46 victory at the Jack Stephens Center. Collier, who finished with 16 points, became the eighth player in school history to score 1,000 career points and grab 500 career rebonds during the game. More photos are available at arkansasonline.com/110ualrwb/.

Print Headline: Getting hot in time