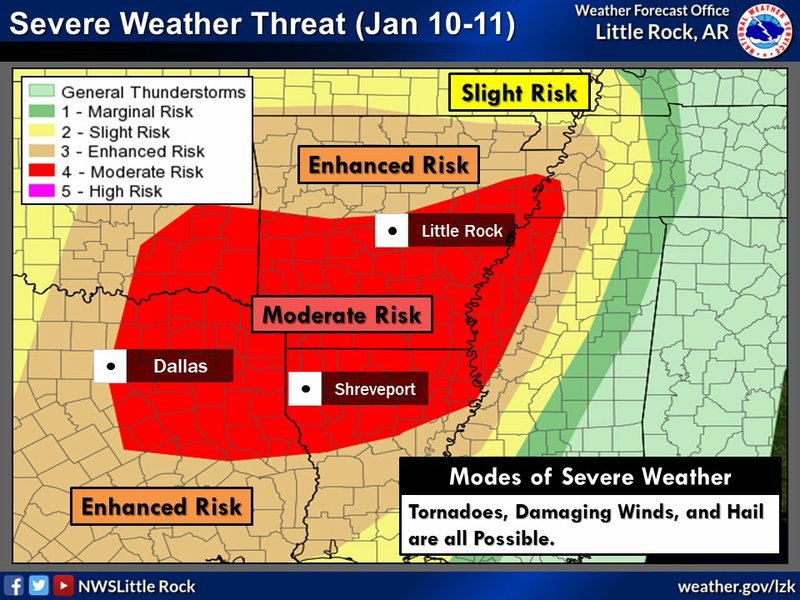 ( Courtesy of the National Weather Service )
Tweets by NWSLittleRock

Arkansans can expect hurricane-force winds overnight, according to the National Weather Service, as a storm system moves through the state from about 10 p.m. Friday through 6 a.m. Saturday.

The southern half of the state, including Little Rock, is now at moderate risk for severe weather with most of the rest of the state at the lower enhanced risk level.

Meteorologist Dennis Cavanaugh said severe winds are the biggest threat as storms are forecast to bring wind gusts up to 80 miles per hour. He said this makes likely “numerous” downed trees and powerlines. He said fences and poorly secured porches could also be blown away.

[Video not showing up above? Click here to watch » youtube.com/watch?v=LNkP8KGs2Fk]

"It really looks like we're going to get some hurricane force winds with these storms as they move through," Cavanaugh said. "That's not really common any time of year."

Although there will be a risk for severe winds all night, the time of greatest risk for Central Arkansas will be around 2 a.m., Cavanaugh said.

Hail is possible with the thunderstorms, Cavanaugh said, but will likely be an inch in diameter or less. The storms also bring a risk for tornadoes, but Cavanaugh said the chance for powerful ones are low.

He said the 80-mile-per-hour winds are comparable to a low-level tornado’s wind speeds, though, and the storm system bringing the winds is 80 to 100 miles wide — “way, way, way bigger than a tornado could ever be.”

Because the severe weather will be developing when most people are asleep, it's important for Arkansans to have a way to get weather alerts that will wake them up, Cavanaugh said.

Cellphones will automatically generate a loud alert if a tornado warning goes into effect, Cavanaugh said. But if a user has opted out of the alerts at any point, they will need to turn them back on in their phone’s settings to receive them again.

Cavanaugh also recommended downloading a weather app designed to send alerts because severe thunderstorms won’t trigger the kind of alert people receive during a tornado warning. He said numerous free ones are available.

Cavanaugh also said people can purchase a weather radio that is designed to send alerts in the event of severe weather.

Outdoor sirens are not useful for Arkansans hoping to be alerted during the night, Cavanaugh said, because they’re not designed to be heard indoors and won’t be loud enough to guarantee a person wakes up.

Before Arkansans go to bed, they should also have a plan for what to do during a tornado warning so there is no groggy scramble in the middle of the night, he added.

Staying away from windows and exterior walls is advised. Basements are the most ideal place to shelter in a storm, but if a home doesn’t have a basement, the most internal room on the lowest floor possible is the best place to be. Advice during high winds is similar.

“If you get woken up my storms or warnings overnight you just want to have time to move yourself and your family away from any trees that might strike your house, ideally to a central location on the lowest floor of your home,” Cavanaugh said.

The other main risk overnight will be flash flooding. Cavanaugh said most areas can expect two to three inches of rain by the time the storms move out with isolated areas seeing more.

Most people won’t be on the roads overnight when flash flooding is most likely, but Cavanaugh said anyone who is driving overnight should avoid low-lying areas and drive cautiously because it is harder to see how much water is on roadways in the dark.

After the storm system leaves Arkansas during the afternoon Saturday, there remains a chance for snow in Northwest Arkansas.

Cavanaugh said far northwestern areas could see up to an inch of snow, but aside from that, the state won’t get wintry weather.

He said roads will also be warm, so accumulation is only expected on grassy areas. Wet roads may ice, though, as temperatures drop.

This story was originally published at 10:56 a.m.