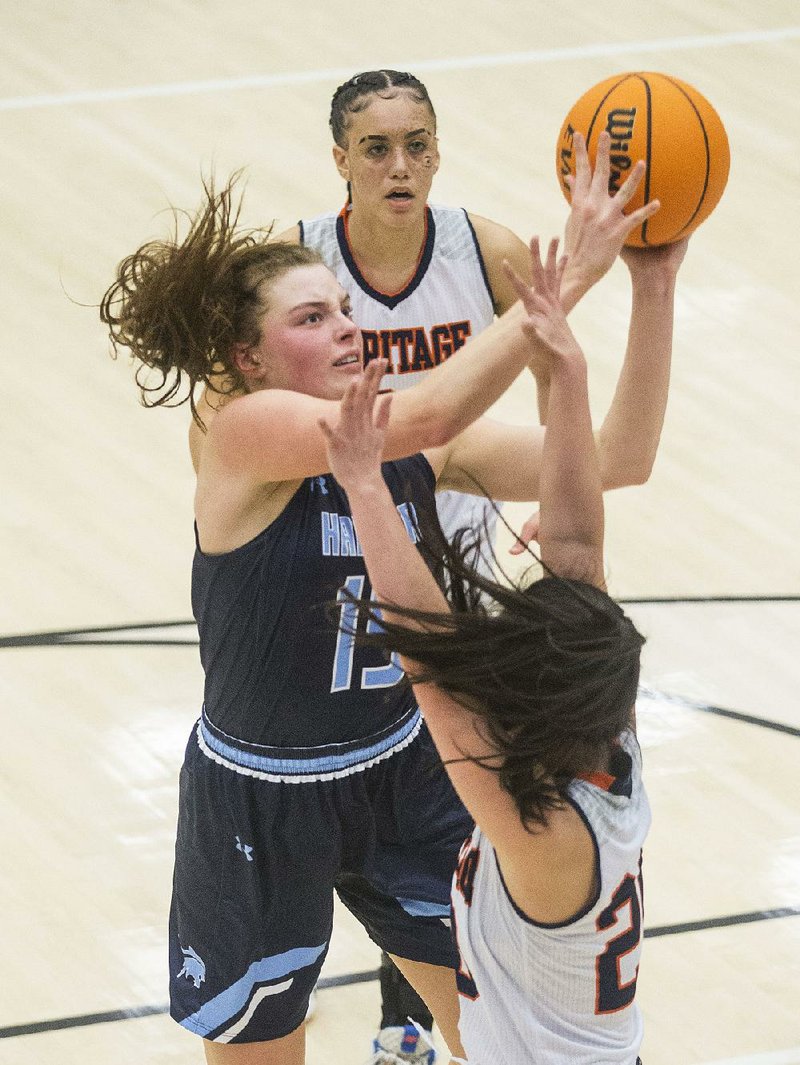 ROGERS -- Springdale Har-Ber clamped down defensively late in the third quarter and pulled away for a 69-55 6A-West Conference road win Friday night in War Eagle Arena.

The Lady Wildcats forced a flurry of turnovers and used a 15-5 spurt to end the third quarter to take control.

Rogers Heritage (9-7, 1-1 6A-West) pulled within 36-33 when Maddie Lynge banked in a three-pointer with just under four minutes left in the third quarter. The Lady War Eagles made one field goal the rest of the quarter as Har-Ber (12-4, 2-0) took control.

"We haven't done that in the past: second-half defense, with our coaches on the other end," she said. "Our communication has been lacking. Tonight, I thought our communication was there. We were dialed into some details in our scouting report with our defense in the second half better than we did in the first."

Quiara Jones' inside bucket pulled Heritage within 44-36 with less than two minutes left in the third quarter, but that was the Lady War Eagles' lone field goal for more than four minutes.

Freshman Pacious McDaniel converted a three-point play in the final seconds of the quarter for a 51-38 lead. Sophie Nelson then added back-to-back baskets to start the fourth quarter as Har-Ber took a commanding 55-38 advantage.

Sophomore Caylan Koons poured in a game-high 29 points, including four three-pointers, while Nelson added 15 and McDaniel 10 for the Lady Wildcats.

Alex Pabon, a 6-1 senior, led Heritage with 16 points, but 10 of those came in the first half. Jones added 11 and Lynge chipped in 10 for the Lady War Eagles, who had their four-game winning streak snapped.

Springdale Har-Ber used an 11-0 spurt in the third quarter to pull away en route to the 6A-West Conference road victory.

The Wildcats (11-2, 2-0 6A-West) led 31-26 after Micah Hill's three-pointer. But the Wildcats responded with 11 consecutive points to grab a 42-26 advantage. Jajuan Boyd had eight points in the run, including a pair of three-pointers.

Lawson Jenkins led the way with a game-high 16 points and surpassed the 2,000-point plateau. Nick Buchanan added 15 and Boyd finished with 12 for Har-Ber, which led 25-21 at halftime