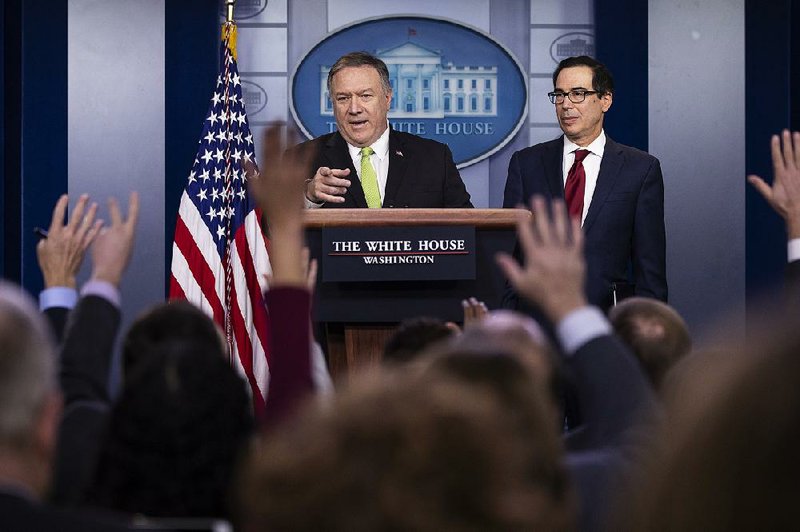 Secretary of State Mike Pompeo (left) and Treasury Secretary Steven Mnuchin brief reporters Friday at the White House about additional sanctions being imposed on Iran by the Trump administration. More photos at arkansasonline.com/111pompeo/.

The Trump administration hit Iran with more sanctions Friday in the first concrete response to the attacks on U.S. forces in Iraq this week, which were in retaliation for the U.S. airstrike that killed the most powerful Iranian military commander.

Secretary of State Mike Pompeo and Treasury Secretary Steven Mnuchin said the new sanctions will target eight senior Iranian officials involved in "destabilizing" activities in the Middle East as well as Tuesday's missile strike, which were retaliation for the U.S. killing of a senior Iranian general in a drone strike.

Among those sanctioned were the secretary of Iran's Supreme National Security Council, the deputy chief of staff of the armed forces and the commander of the Basij militia that has been responsible for a brutal crackdown on anti-government protests.

"We are striking at the heart of the regime's inner security apparatus," said Pompeo, appearing at the White House lectern with Mnuchin.

The sanctions were widely anticipated, as President Donald Trump had publicly vowed to impose them in response to the attack. No Americans or Iraqis were killed, and Trump said in a statement Wednesday that Iran "appears to be standing down."

Iran's economy is already burdened by sanctions on more than 1,000 individuals, companies and organizations that have been imposed since Trump withdrew from the 2015 nuclear deal with Iran as part of a "maximum pressure" campaign to get Tehran to change its policies. Some Iranians have been sanctioned more than once, in what a U.S. official called a "wraparound effect."

[Video not showing up above? Click here to watch » https://www.youtube.com/watch?v=rRwZKGTq9uI]

Mnuchin said Trump will issue an executive order imposing sanctions on anyone involved in the Iranian textile, construction, manufacturing or mining sectors. They also will impose separate sanctions against the steel and iron sectors.

"As a result of these actions we will cut off billions of dollars of support to the Iranian regime," the treasury secretary said.

The administration has already reinstated all the U.S. sanctions that were eased under the 2015 nuclear deal, which has caused significant economic hardship in Iran and cut its oil exports to historic lows.

The latest round of sanctions are more broad-based than previous ones that have focused mostly on Iran's oil, banking and shipping sectors. The new sanctions blacklist Iran's entire construction, mining, textiles and manufacturing sectors. Anyone doing business with them will face sanctions as well.

Brian Hook, the special envoy for Iran, predicted the sanctions would have a major impact on the leadership, because they target the sectors that have kept Iran's economy "on life support."

"We have this regime that is facing its worst financial crisis, and its worst political unrest in its 40-years history," he said in a call with reporters. "And so the regime has very bad options right now. They are in a state of panicked aggression."

Iranian President Hassan Rouhani said last month that the U.S. "economic war" of sanctions had deprived Tehran of $100 billion in oil revenue and another $100 billion in investments. By some estimates, Iran's economy contracted more than 10% last year.

The economic stranglehold has forced Iran to adopt a "budget of resistance" that includes ending some subsidies and raising fuel prices. The budget cuts have helped spur widespread protests and a government crackdown. But the pain has mostly been felt by ordinary Iranians instead of government officials.

The Trump administration says that it believes the sanctions will push the Iranian government to renegotiate the nuclear deal, curtail its missile development program and stop its sponsorship of militias in neighboring countries.

"We want Iran to behave like a normal nation," Pompeo told reporters, reprising a demand he has made repeatedly over the past year and a half since he outlined 12 ways the Iranian government must change before sanctions can be eased.

Though Pompeo and other administration officials have denied they are seeking regime change, the sanctioning of officials involved in the crackdown against protesters signaled Washington's support of those in Iranian society most discontented with their government. State Department officials have said as many as 1,500 Iranians may have been killed in the protests, though independent human-rights group put the number in the hundreds. Many thousands have been imprisoned.

The security force that put down the protests was the Basij, a volunteer paramilitary group whose commander, Gholamreza Soleimani, was sanctioned Friday,

"It's also really important for us to go after Iran shock troops, the Basij, which have been murdering Iranians who have been fighting for their freedom," Hook said. "So when we do this, it has a substantive effect, but it also signals to the Iranian people that that we stand with them and their demands for a more representative government."

Though the maximum-pressure campaign has not accomplished any of its goals in getting the ruling clerics in the Iranian government to change their foreign policy, administration officials say they are confident it will prevail.

Pompeo said the effort has denied Tehran the resources needed to advance what he called "its destructive foreign policy." Oil revenue is down 80%, and the government, he said, has no access to 90% of its foreign currency reserves.

"They've got real challenges," he said of the decisions facing the Iranian government. "Do you underwrite Hezbollah? Do you pick Hamas? Do you underwrite the Shia militias in Iraq? Or do you allow your people to have the opportunity to live the life they want and grow your economy? Those are the difficult choices that the regime is facing."

Foreign diplomats and Iran analysts say that Tehran shows little sign it is willing to buckle under U.S. pressure. But Pompeo and Mnuchin said there will be no sanctions relief unless Tehran does an about-face.

"As long as Iran's outlaw ways continue, we will continue to impose sanctions," Pompeo said.

Behnam Ben Taleblu, an Iran analyst with the Foundation for Defense of Democracies, lauded the broader sanctions as a way to further drive down Iran's export earnings that could be diverted in part to proxy militias.

"If anything, the time has come to ramp up the pressure, and fast," he said, adding that Iran is banking on a change in 2020 that dislodges the maximum pressure policy. "These sanctions begin to do that."

Meanwhile, U.S. officials said Friday that the U.S. military tried, but failed, to take out another senior Iranian commander on the same day that an American airstrike killed the Revolutionary Guard's top general.

The officials said a military airstrike by special operations forces targeted Abdul Reza Shahlai, a high-ranking commander in Iran's Islamic Revolutionary Guard Corps, but the mission was not successful. The officials spoke on condition of anonymity in order to discuss a classified mission.

Officials said both Iranian Gen. Qassem Soleimani and Shahlai were on approved military targeting lists, which indicates a deliberate effort by the U.S. to cripple the leadership of Iran's Quds Force, which has been designated a terror organization by the U.S. Officials would not say how the mission failed.

The State Department offered a reward of $15 million last month for information leading to the disruption of Revolutionary Guard finances, including those of Shahlai, a key financier in the organization. The State Department said he "has a long history of targeting Americans and U.S. allies globally," and planned attacks on coalition forces in Iraq. It said that his activities included providing weapons and explosives to Shiite militia groups and directing a plot to assassinate the Saudi ambassador in Washington, D.C., in 2011.

The Pentagon declined to discuss the highly classified operation.

"We have seen the report of a Jan. 2 airstrike in Yemen, which is long-understood as a safe space for terrorists and other adversaries to the United States. The Department of Defense does not discuss alleged operations in the region," said Navy Cmdr. Rebecca Rebarich, a Pentagon spokeswoman.

Information for this article was contributed by Carol Morello of The Washington Post and by Lolita C. Baldor and Robert Burns of The Associated Press.