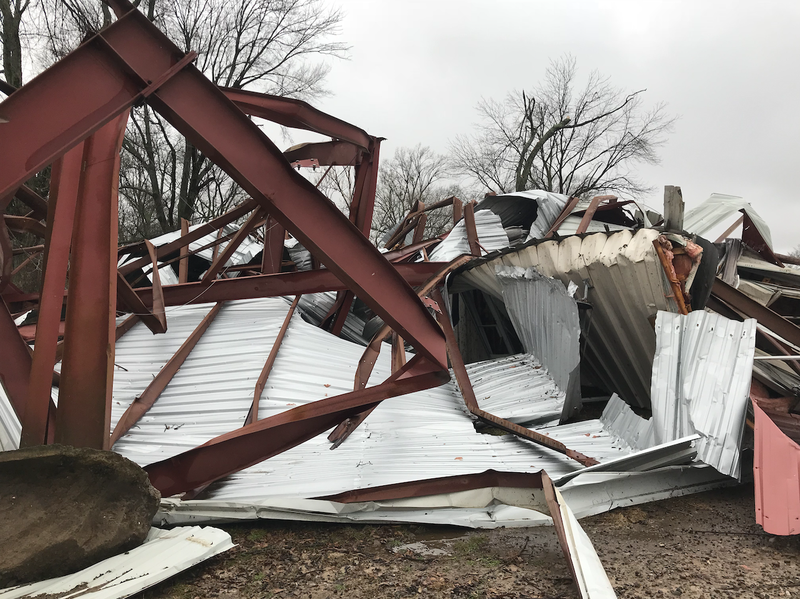 Wreckage of a structure destroyed in Lonoke County during severe storms that swept across much of the state overnight Friday and early Saturday morning. ( Thomas Metthe)

Wintry precipitation began falling in portions of western and northwestern Arkansas on Saturday morning, hours after severe thunderstorms left tens of thousands without power and caused widespread property damage across the state.

Meteorologist Joe Sellers with the National Weather Service in Tulsa said areas around Fort Smith saw sleet and freezing rain as of 11:50 a.m. while the far northwest corner saw snow.

He said total accumulation is likely to be less than half an inch in most areas.

The Arkansas Department of Transportation reported several highways and roads in western and northwestern Arkansas have been affected by winter weather conditions.

Sellers said temperatures are expected to remain below freezing in some western and northwestern areas for the rest of the day, so any accumulation will not naturally melt until Sunday.

There were no reported injuries or fatalities, Heather Cross, a meteorologist at the weather service’s bureau in North Little Rock said Saturday morning. The weather service also received only one report of a possible tornado, in Logan County, Cross said.

Weather service crews were headed there Saturday morning to determine if the damage was actually caused by a tornado. She said there were numerous other reports of downed trees and power lines statewide.

There were reports of wind damage in Franklin County, and Benton County saw large hail, up to 1 ¾ inches in diameter, Sellers said.

“It was about what we expected,” Cross said of the storm system. “We experienced widespread wind damage and isolated tornadoes.”

About 21,000 Entergy customers were without power early Saturday afternoon, according to an outage map. Spokesman David Lewis said the number of outages peaked around 6 a.m. at nearly 42,000.

The company anticipated widespread outages, Lewis said, so all field crews were on duty Saturday with about one-third packed to travel.

He said the most outages in Arkansas were reported in the areas around Pine Bluff, El Dorado, Forrest City, Lake Village and Wynne.

Lewis said the repairs that will restore power to the most customers are done first, so although more than 10,000 people already have their power restored this morning, the rate of restoration will slow as the day continues.

He expects full restoration of power will not be completed for a “couple” of days but did not yet have an estimated time of completion.

“We hope for the best and plan for the worst,” Lewis said. “We never know how many outages a particular storm will cause, but we can make educated guesses.”

Tuesday Butler, a dispatcher in Chicot County, said many power lines and trees came down. Some mobile homes and campers also flipped, and multiple houses sustained structural damage, she said.

According to the dispatcher, there were around 20 calls to Chicot County dispatch to report damage or other results of the storm, with most coming in between 3:30 and 4 a.m.

As of 1 p.m., nearly 4,300 Entergy customers were without power in Chicot County.

Severe winds not only downed power lines and trees but also toppled tractor-trailers on Interstate 40, according to the Arkansas Department of Transportation.

I-40 was closed in both directions for a time Saturday morning near Wheatley, the department said in an alert, because of “several” overturned tractor-trailers. The crash was cleared as of 9:20 a.m. 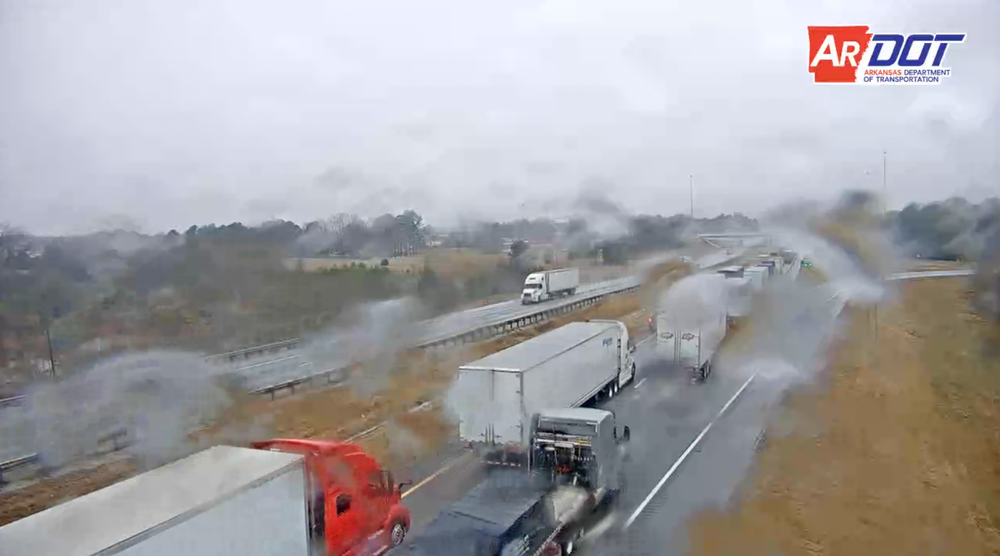 Interstate 40 was closed in both directions Saturday morning near Wheatley after severe storms toppled "several" tractor-trailers.

He said most of the calls were for vehicles stalling out in water on the roads. On some of the calls, water was ankle-deep but in at least one case, on Hanger Street, Lear-Sadowsky said it was knee-deep.

Other rescues were on La Harpe Boulevard and the intersection of North Van Buren and West Markham streets.

Cross said there was also a report in Pulaski County on social media of two cars in high water near the Broadway Bridge.

Although the most emphasis was put on the risk of severe winds, Lear-Sadowsky said Little Rock seemed to experience "more of a rain event."

He said aside from the water rescue calls, the fire department responded to a relatively normal number of other calls for one night, about 24.

"All in all, we fared pretty well, I think," Lear-Sadowsky said.

More reports of flash flooding may be forthcoming, she said, because they tend to come after the damage reports.