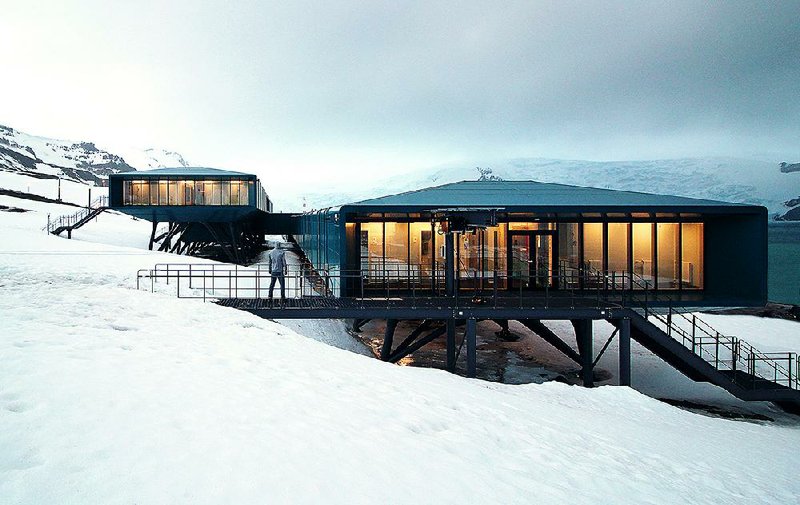 Brazil’s stylish and comfortable new Comandante Ferraz Research Station sits on the tip of the Antarctic Peninsula and will be devoted to studying climate change.

Representatives from Brazil's scientific community and government will head to Antarctica this month to inaugurate its new Comandante Ferraz Research Station, which replaces a facility lost to fire in 2012. The two low-slung buildings, designed by Estudio 41, a Brazilian architecture firm, house laboratories, operational support and living quarters -- and could be mistaken for an art museum or a boutique hotel.

"Brazil is a tropical country, so we were not used to these conditions," said Emerson Vidigal, a principal at the firm.

"These conditions" include temperatures that drop below minus 60 degrees Fahrenheit and winds that reach 100 mph.

Throughout the 20th century, architecture in Antarctica was a pragmatic, largely makeshift affair, focused on keeping the elements out and the occupants alive. In 1959, the Antarctic Treaty dedicated the continent to research. Since then scientists have arrived in growing numbers, with ever more complex needs.

Construction in Antarctica, long the purview of engineers, is now attracting designer architects looking to provide aesthetics -- as well as efficiency, durability and energy improvements -- in the Earth's coldest neighborhood. "As architects, we are concerned with human comfort, so we set out to create a kind of atmosphere that would promote well-being," Vidigal said.

When British explorers built one of the first permanent structures there, in 1902, they insulated it with felt and clad it in wood. The hut was "so drafty and cold in comparison with the ship," Ernest Shackleton, one of the crew members on that expedition, recalled, "that it was, during the first year, never used for living quarters." As accumulating snow rendered the door impassable, the crew resorted to using a window to come and go.

That sense of improvisation continued for decades. In 1956, Britain's Royal Society founded Halley Research Station, but the facility was covered in snow by 1961 and was shut down in 1968. A replacement, Halley II, was reinforced with steel supports, but its life span was even shorter, from 1967-73. Halley III lasted for 11 years, Halley IV for nine, and Halley V for nearly 15, with each rebuilding effort presenting a costly, complex undertaking.

When, in 2005, Halley needed rebuilding again, the British Antarctic Survey, which operates Britain's Antarctic footprint, took a novel approach, teaming up with the Royal Institute of British Architects to sponsor a design competition. The winner, Hugh Broughton Architects, designed Halley VI to last at least 20 years.

In addition to being visually striking, Halley VI provides a more comfortable living and work environment. It is set on hydraulic stilts, allowing operators to lift it up out of accumulating snowdrifts. And if the entire station needs to be moved -- it sits on an ice shelf -- skis at the base of the stilts make that possible. "Before, these projects were all just about keeping the weather out," Broughton said. "Engineers would be told, 'this is the weather, this is the wind speed, these are the restrictions.' But now these projects are about using architecture as a means of improving both well-being and operational efficiency."

Other countries have taken note. In 2018, Spain opened a new research station -- and hired Broughton's firm to design it. Like Halley VI, it cuts a strong figure, its modular buildings are clad in bright red fiber-reinforced plastic panels.

Not only do these buildings need to withstand some of the world's most demanding conditions, but building materials need to be shipped in and assembled in the short 12-week window of summer. Most projects are built incrementally over several years.

When India's National Center for Antarctic and Ocean Research decided to build a new research station, the architecture firm it chose -- Bof Architekten, in Germany -- found a way to make construction more efficient. Rather than send shipping containers full of building materials to Antarctica and send them back empty, the architects integrated the shipping containers into the design. "It's not one of those things that you wake up [and] say, 'I want to build a research station in Antarctica,' but architects provide important contributions to these projects," said Bert Buecking, a partner at Bof Architekten.

For the United States, architecture in Antarctica is a matter of some urgency. The largest U.S. station, McMurdo, started out in 1956 as an improvised naval base, grew in an ad hoc manner over decades and needs updating.

"Just to prepare for field work, scientists receive training in one building, collect field equipment in another building, pick up a snowmobile in a separate building and fuel it in another location," said Ben Roth, the project manager of Antarctic Infrastructure Modernization for Science, the National Science Foundation initiative that will modernize McMurdo Station over the next decade.

He called the existing buildings "energy hogs," and other U.S. officials think that creates additional problems for scientific research at the outpost. "The more we spend to keep the buildings going, the fewer resources we have to get researchers out in the field," said Alexandra Isern, head of Antarctic sciences at the National Science Foundation.

In 2012, the National Science Foundation hired OZ Architecture, a firm based in Denver, to develop a preliminary concept design for a new McMurdo. A separate team of architects and builders is at work developing those designs. The result will provide "creature comforts," Roth said, including fitness centers, lounges and improved living quarters.

Broughton noted with interest "how the approach to these projects has changed so dramatically in such a short period of time." As Buecking put it, "when the U.K. built Halley VI, many nations realized the importance of doing something special, and not just doing something." 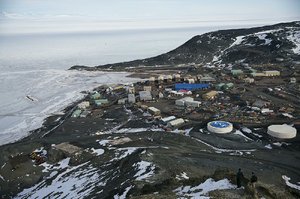 Photo by The New York Times/Jonathan Corum
The sprawling McMurdo Station, the largest U.S. facility in Antarctica, will be replaced by new quarters that will provide “creature comforts” in a setting more efficient for research, officials say.