Big chain's stores new kids on block; 2 Ozarks towns of 2 minds on it 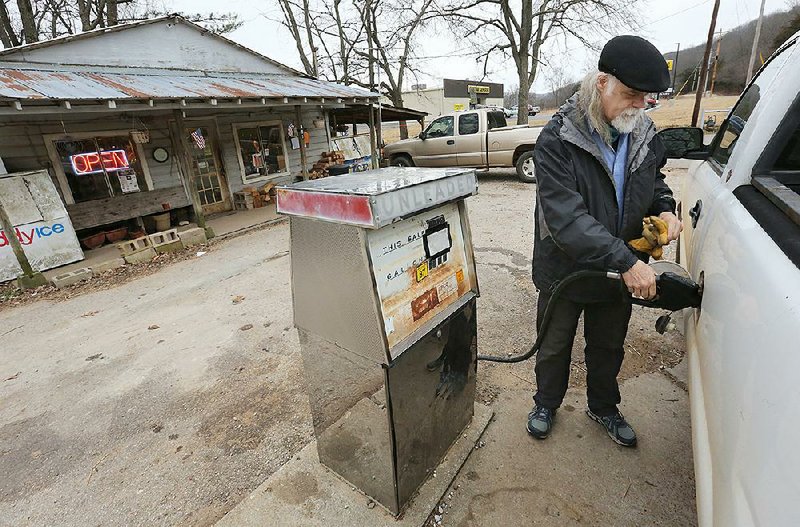 David Blaisus with the Flourish Co. fills up Thursday at Ahart’s Grocery, which has the only fuel pump in the tiny Ozarks town of St. Paul. A Dollar General store will open next to the country store in coming days, and some residents fear that will spell the end of Ahart’s.

ST. PAUL -- A Dollar General store will open here by the end of the month.

Some people say it's a good thing. They won't have to drive 22 miles to Elkins or Huntsville to buy basic necessities.

Others say it could be a death knell for small businesses in St. Paul, and the town could lose some of its Ozark Mountain charm.

Mayor Nina Selz believes St. Paul can have its Dollar General and maintain its mountain culture.

"We think it's good," she said of the store moving in. "We want to keep the Ozark flavor. I think Dollar General is pretty Ozarkian anyway. They're always in the rural areas."

St. Paul, population 113, is tucked into the White River valley just north of the Ozark National Forest in rural Madison County. The town is 2 miles east of the Pig Trail Scenic Byway -- where Arkansas 16 and Arkansas 23 intersect at Brashears.

Incorporated in 1891 along the route of the Fayetteville and Little Rock Railroad, St. Paul grew rapidly. By 1910, the town had a population of 430. During the early 20th century, St. Paul had 12 lumber mills, three hotels, general merchandise stores, blacksmiths, a newspaper, barbershops, drugstores, a movie theater, a Masonic lodge, a bank and a jail, according to the Central Arkansas Library System's Encyclopedia of Arkansas.

A century later, most of that is gone. As far as groceries go, St. Paul has Ahart's Grocery Store and Kimball's Korner Store, which sell a few groceries along with beer and some prepared food, such as fried chicken. There's also the Saints Snack Shack, where customers can get hamburgers and eat at a picnic table out front.

St. Paul has no chain businesses of any kind. The town doesn't have a supermarket, laundromat, car wash or public restroom.

Selz said she'd love to get a sit-down restaurant and a bowling alley.

Amenities are good when it comes to recruiting teachers and others to move to town for work, she said.

Selz said a Dollar General could be good for St. Paul in another way. She said a 2% city sales tax will be on the March 3 primary election ballot, which -- if it passes -- would help the town generate much-needed revenue.

Selz said there was no need for a sales tax before the Dollar General was built because St. Paul just didn't have enough retail sales.

On the other side of the Ozarks -- 182 miles to the east -- the town of Cushman, population 452, is also getting a Dollar General. It's set to open in the spring. Cushman is 12 miles northwest of Batesville in Independence County.

For two weeks, that store had a regular protester -- until Dec. 5 when Ranae Hillard, 70, was arrested by the Arkansas State Police for misdemeanor disorderly conduct.

Hillard said she and a state trooper got crossways after he accused her of sticking her sign -- which read "Help Stop Dollar General in Cushman" -- over the fog line on the edge of the highway. Hillard said she wasn't. Her trial is scheduled for Jan. 22.

Hillard said her equilibrium has been a bit off ever since the arrest. She said her husband, Robert Hamilton, had been protesting with her. She's still posting the signs in her yard.

Hillard said Cushman is "a quaint little place in a pristine area."

"When these box stores come into a community, everything else closes down," she said. "I think it's going to take away the ambiance of the whole area. Well, it already has."

Hillard said Cushman residents have to drive to Batesville to visit the doctor, pharmacy or to do extensive grocery shopping.

But they can buy some groceries at the Cushman Country Store.

Josie McMahan, manager of that store, said the Dollar General may hurt the local store's grocery sales, but her store provides lots of other stuff.

"We're kind of nervous about our grocery section going downhill on that," she said. "But we cook a lot of food, we have feed for cows and horses, we have a hardware room. We have kind of a full kitchen, restaurant. We cut fresh deli meat. We're about to expand our kitchen and focus on our cooking.

"We have a lot of loyal customers who like family owned businesses rather than worldwide businesses."

McMahan said her father, Mike McMahan, has owned the store for almost 28 years.

Brooks Blevins said most local people in Cushman are probably excited about the Dollar General or indifferent to it.

"At least that seems to be the thoughts of the few people I've talked to in that area," said Blevins, an expert on Ozark Mountain culture who teaches at Missouri State University.

"From the idealistic outsider's standpoint, it's easy to dismiss the development as the potential end of locally owned business, the demise of local charm and uniqueness," Blevins said. "And it does seem like another step toward the homogenization of America. ... But most people who aren't directly and negatively affected by the new store will probably accept the change willingly. I would guess most folks will appreciate the cheaper prices, larger selections and later hours."

In St. Paul, the Dollar General will be next-door to Ahart's Grocery, which has been operated for the past 40 years by Phyllis Ahart Haire, who has been ill and was unavailable for comment last week.

Ahart's carries a variety of groceries, including fresh bell peppers, carrots, lettuce and tomatoes. It's also the only place in St. Paul that sells gas.

In the tradition of Depression-era general stores, Ahart's lets the locals run a tab and pay it off every month. That won't happen at the Dollar General, which as of Nov. 1 had 16,094 stores nationwide and about 400 in Arkansas.

Dollar Tree, which owns Family Dollar, also has stores in Arkansas under both of those names.

Gaye Hukel of Pettigrew, who is a volunteer at the St. Paul Public Library, said her primary concern is for the small businesses that already exist in St. Paul, like Kimball's and Ahart's.

"Ahart's is the only place in this area to buy gas," she said. "It's very conceivable that they could be put out of business by Dollar General."

"I think it's going to be a good deal. You'll have a selection of things they don't have," he said, pointing at Ahart's Grocery. "Now, we have to go all the way to Huntsville or Elkins. It's going to draw a lot of folks from miles around here. I don't see any downside to it myself. It might hurt some of the smaller businesses."

"They've got so many things under one roof -- groceries, frozen foods, toiletries, hardware and things like that that people in this area might need," he said.

Springston said the store will provide jobs, and other retailers might follow Dollar General to St. Paul.

"This is really just the next dimension of the old Walmart retail strategy of half a century ago," Blevins said. "Lots of folks back then scoffed at the idea of putting a big discount store in a town of 5,000 or 6,000 people. Most of us would never have dreamed of seeing a chain retailer move into a place like St. Paul [or Cushman], but it may work. I'm sure somebody at headquarters has done the research."

"Our customers are at the center of all that we do, and meeting customers' needs is Dollar General's top priority when choosing store locations," said Mary Kathryn Colbert, a spokesman for Dollar General. "The company looks for places where we can offer customers an easy and convenient shopping choice as we generally serve customers within a 3- to 5-mile radius, or 10-minute drive. We also take competitive factors, traffic patterns and community concerns into consideration."

Dollar General was founded in 1939 as J.L. Turner and Son, a wholesale business in rural Scottsville, Ky.

"By 1955, the company had pioneered the dollar-store concept," Colbert said. "Since then, we have located our stores and based our merchandise selection on the needs of households seeking value and convenience in a variety of rural, suburban and urban communities."

She said about 75% of the company's stores serve communities with populations of fewer than 20,000 people.

"With more than 16,000 store locations and points of distribution, we use our scale for good to help negotiate lower prices for our customers across all of the locations we serve," she said.

Blevins used an Andy Griffith analogy to sum up the situation.

"We may want Mayberry to fend off the outside corporate world, but I reckon Aunt Bee would have shopped at Dollar General if it saved a few bucks," he said, referring to the 1960s television show. 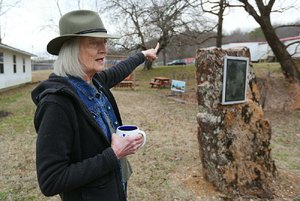 Photo by NWA Democrat-Gazette/David Gottschalk
St. Paul Mayor Nina Selz lists the different businesses and services available in the small Ozarks Mountain town on Thursday. Selz said she is happy to see a Dollar General store open there. “I think Dollar General is pretty Ozarkian,” she said. Selz also sees the benefits if a 2% city sales tax on the March 3 primary ballot is approved. “We don’t want to be a big town, but want to be able to continue paying our bills here.” 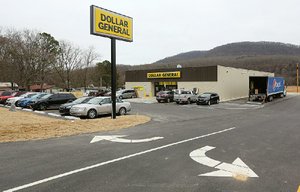 Photo by NWA Democrat-Gazette/David Gottschalk
The Dollar General store in St. Paul is to open by the end of January to little fanfare. At Cushman, on the other side of the Ozarks, a regular protester, Ranae Hillard, 70, was arrested Dec. 5. Hillard said Cushman is “a quaint little place in a pristine area” and she fears that the chain store is “going to take away the ambiance of the whole area. Well, it already has.” 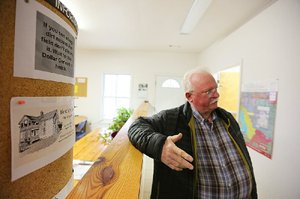 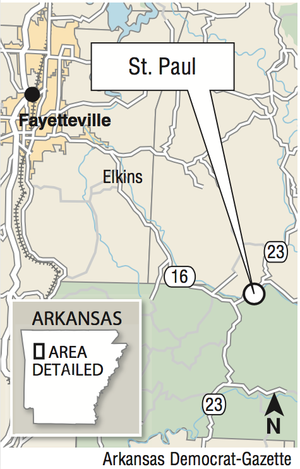 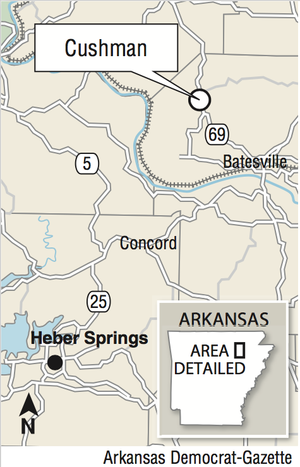