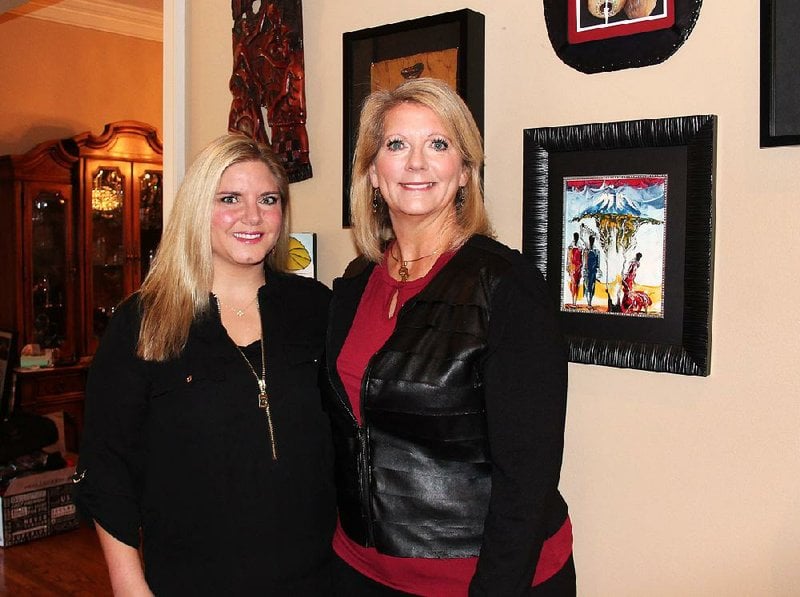 Amanda Weir (left) is director of development and co-founder of Acts4Rwanda, with her mother, founder and executive director Lynda Weir.  ( Sean Clancy)

It was love at first visit.

Lynda Weir traveled to Rwanda for the first time in 2008 and was smitten.

"It was with a mission-oriented group from here in Little Rock," she says. "I fell in love with Rwanda. I felt like it was my heart's home, like it was the place I was meant to be."

What was it about the east African country the size of Maryland that caused such a response?

"The landscape is beautiful, but it's the people," she says last month at her west Little Rock home. "They are so full of joy in the midst of abject poverty. They welcomed me with open arms.

Lynda, a Little Rock travel agent, has been back 15 times. And not only is she a frequent visitor, she is a founding member of a program to help the country's poorest children.

Weir is executive director of Acts4Rwanda, the nonprofit she created in November 2013 with her daughter, Amanda Weir, and African nationals David Alireki and Johnson Karamuzi to help needy and vulnerable youths in and around the Rwandan capital Kigali.

Egide Murisa is a native of Rwanda who lives in Little Rock and is a member of the Acts4Rwanda board of directors.

"They are great to work with," he says of the Weirs in an email from Kigali, where he was visiting family last month. "Lynda is very passionate about helping the kids."

Amanda, the group's director of development, made her first trip to Rwanda in 2010 after she graduated from Little Rock Central High School.

"I'd been wanting to work in Rwanda since I was 14 when I learned about the poverty and the results of the genocide," she says, referring to the mass slaughter of nearly 1 million people -- most of them from the Tutsi ethnic group -- between April 7 and July 15, 1994, during the Rwandan Civil War.

Amanda, who speaks fluent Kinyarwanda, the official language of Rwanda, studied conflict resolution and minored in Africana Studies at Auburn University. After graduating she moved to Kigali, where she lived for nine months, helping organizations register for funding with the United Nations.

It was while there that she, Lynda and several Rwandan friends came across a profoundly impoverished slum referred to by locals as "Brazil" in the Nyabisindu district of the capital.

For some context, 63% of the country lives in extreme poverty, making less than $1.25 per day, according to statistics provided by Lynda. People of the Brazil slum were even worse off.

"It's right near a [soccer] stadium, maybe a kilometer down a hill," Amanda says. "We had all eaten at cafes at the top of the hill, but none of us knew the depth of the poverty that was down there."

When they went, it was like being in something out of the film Slumdog Millionaire, Amanda says.

"We walked into a home where a gentleman was helping feed 13 boys. The house was maybe as big as our dining room table. The boys had bruises, some of them had broken ribs and scars. They had been kicked and beaten because they were homeless and sleeping on people's doorsteps."

It was devastating, Lynda says.

"They were so hopeless. There was no light in their eyes like the hope had gone out of their countenance, and they had basically nothing to live for."

Speaking with their Rwandan friends, the Weirs heard story after story of what children of this slum had been through.

They sat down at Amanda's kitchen table in Kigali and decided to do something. It was the beginning of Acts4Rwanda.

According to the 2012 Rwanda National Census, 62% of Rwandan youths have never been to school or have not completed primary school.

Acts4Rwanda, which was started with funding from an anonymous Little Rock family, aims to send the country's poorest children to area schools through a model where students are sponsored by donors.

There are about 25 volunteers in Little Rock, and 90 cents of every dollar goes directly to the program, say the Weirs, who are both unpaid volunteers.

"We started with 26 children in January 2014, and now, we have 135 that we send to school," Lynda says. "We also have 12 in university and one that just graduated from university. These children work hard. They are resilient, and they want the opportunity."

"They study by candlelight," Amanda adds.

Education, she says, "is the single most important thing to helping all of them have a fulfilling life not only as a citizen but as a self-actualized person."

Some of the children are orphaned, some come from single-parent homes and others come from homes of extreme poverty.

Sometimes, families could afford to send children to one semester of school but couldn't afford another, and the kids would be kicked out.

Many of the students are girls. In an Acts4Rwanda video -- arkansasonline.com/112rwanda -- 14-year-old Deborah says her dream is to become president of Rwanda.

"That wasn't scripted," Lynda says. "She is so well-spoken and intelligent that she probably will."

One of the program's students scored highest out of 40,000 graduating seniors on Rwanda's equivalent of the SAT test.

"He's on a full scholarship in China right now," says Lynda, beaming like a proud mother.

Along with sending children to school, a feeding program run by the group provides 30,000 meals a year, she says.

In 2017, the group bought 13 acres of land in Gasabo, a half-hour outside Kigali, where it raises mangoes, sweet potatoes, greens, sorghum, pumpkins and other goods to help feed students. There are plans to include cash crops like bananas that can be sold locally to help fund the project, according to Lynda.

The Weirs are aware of the optics: White ladies from the West come swooping in with all the answers. But that's not the case, they say. They have had plenty of help from locals and Africans who are familiar with the area and the people's needs.

Murisa, who first got involved after sponsoring a student, advises "the board on the Rwandan education system, life in Rwanda and obtaining and managing resources in Rwanda," he says.

They also work closely with co-founders Alireki and Karamuzi, who were teachers at a school the Weirs visited in 2010.

Alireki and Karamuzi had gotten their educations through sponsorship and have sponsored students themselves. They knew the importance of a program like this, the Weirs say.

"It's a collaboration between both sides to make this work," Amanda says. "It's through our relationship with these Rwandans and African teachers, who also took the time to look and listen."

It didn't hurt that Amanda and Lynda were fine with living without luxuries when they visited.

"We were the only mzungu [white] ladies who would go and live in their communities," Lynda says. "When we would go alone, not on a team trip, we stayed in remote areas with no electricity." And they showered using nothing but a bucket of water.

There are three full-time staff members in Rwanda who work with the students and help identify children at risk of abuse or neglect to be part of the program. They then work to connect the child with a sponsor.

Students in the program visit the group's "transformation center," situated between two of Kigali's biggest slums, daily. There, they are fed and tutored and are able to play with other students.

Once they are sponsored, Acts4Rwanda will keep the student even if his or her initial sponsor drops out.

"We stay with them until they graduate from high school, no matter what," Lynda says. "Our little program is small but mighty. We've done a lot because we go deep with each student. We know them well, we know their struggles. We are very focused on our students and we are connected in a deep, personal way."

For information on becoming a sponsor or donating, visit acts4rwanda.org. 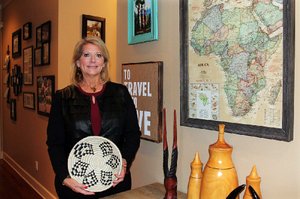 Photo by Sean Clancy
Lynda Weir, co-founder of Acts4Rwanda, holds a traditional peace basket made for her by Rwandan women. Acts4Rwanda helps to educate impoverished children in and around Kigali, Rwanda.