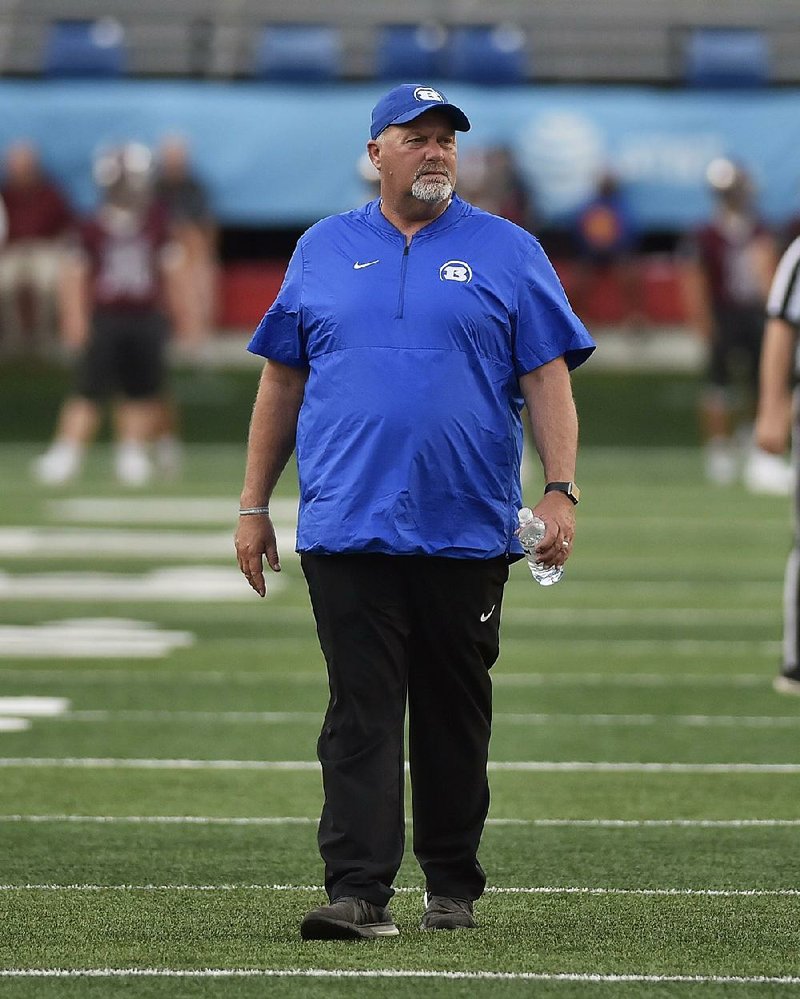 Bryant Coach Buck James understood that his team had a target on their back after winning the Class 7A state championship in 2018.

The 2019 Hornets didn't let the expectations bother them and repeated as champions.

James at a glance

HIGHLIGHTS Led Bryant to its second consecutive Class 7A state championship. … Guided Hornets to their first undefeated season (13-0) in school history. … Won third state title in career, also winning in 2012 at Camden Fairview and in 2018 at Bryant. … Has been at Bryant since 2016.

Led by James, the Hornets won their second consecutive Class 7A title by defeating their rival North Little Rock on Dec. 6 at War Memorial Stadium in Little Rock.

That victory capped a 13-0 season, the first undefeated season in school history.

Also, the Hornets went wire-to-wire as the Arkansas Democrat-Gazette's No. 1 team in the overall Top 10 and in Class 7A.

For the first time in his coaching career, James is the Democrat-Gazette's All-Arkansas Preps Coach of the Year.

James, a 33-year coaching veteran in Arkansas with head coaching stops at Star City and Camden Fairview, arrived in Bryant in 2016 after serving as an assistant at Little Rock Christian. He led the Hornets to the Class 7A semifinals in 2017 and has taken them them to two state championships in a row.

Ten of Bryant's 13 games invoked the mercy rule, in which the game clock runs continuously when a team gets ahead by 35 points or more.

"This year, we never got off to a bad start," James said. "It was like a dream, like you never thought it would happen."

Of all the teams James has coached, he said the 2019 Hornets were the best.

"It was a lot of fun," James said. "They enjoyed practice, the film sessions and the weight room. It was the love of the game and their commitment to be a great team. They really got it."

In the Class 7A playoffs, the Hornets knocked off Fayetteville and Bentonville West once again to reach the state title game. They led 14-0 at halftime against North Little Rock and went on to win 21-7, with Ledbetter earning MVP honors after throwing three touchdown passes.

"Those kids just kept answering the bell," James said. "They were an unselfish group of kids."

Bryant loses several key starters, including Adams, Meaders, Wallace, defensive back Darrick Rose and defensive lineman Austin Bailey. But James said he knows that like it was entering the 2019 season, the target will be on the Hornets' back as they attempt a three-peat.

"It's next man up," James said. "We've got some holes we got to fill. The next step in having a great program is keeping it going. Pulaski Academy does it. Greenwood does it.

"Now we have to go in there and play at an even higher level."