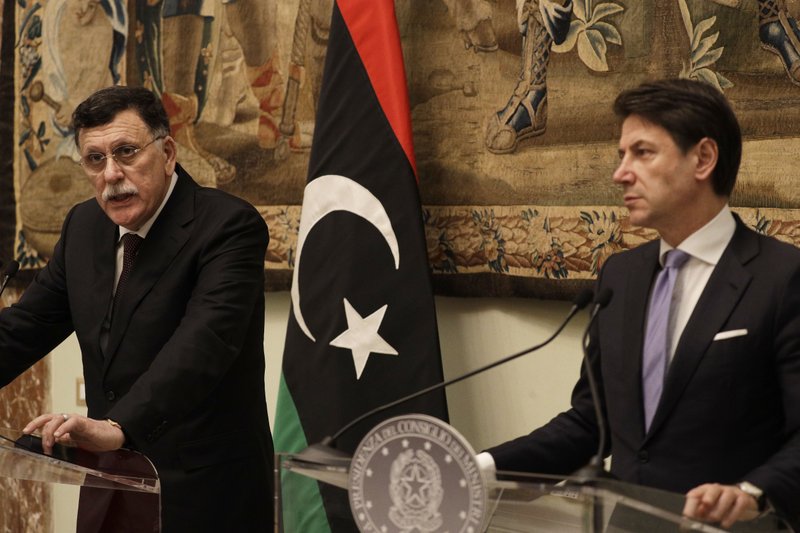 ROME -- Libya's U.N.-backed prime minister Saturday conditioned his government's participation in a proposed cease-fire to rival forces withdrawing from the outskirts of Tripoli, suggesting no immediate end to the country's civil war.

Prime Minister Fayez Serraj defended his "bellicose activities" to protect the Libyan capital, the seat of his government, on the eve of the start date for the truce proposed by Turkey and Russia. Serraj spoke while in Rome for a meeting with Italian Premier Giuseppe Conte.

The meeting was the latest diplomatic effort to end the offensive launched by Serraj's rival in eastern Libya, Gen. Khalifa Hifter, and return the two sides to a U.N.-supported political process.

The presidents of Turkey and Russia last week called for a cease-fire between the warring eastern and western Libyan forces starting today. While Serraj's government welcomed the call, a spokesman for Hifter's self-styled Libyan Arab Armed Forces, Ahmed al-Mosmari, said the group's battalions would still try to take control of Tripoli from what he called "terrorist groups."

"We welcome with pleasure the Russian and Turkish initiative that points to a cease-fire, as we are always open to and welcome any initiative that goes in this direction," Serraj said in comments after meeting with Conte. "As long as it is conditioned on the complete withdrawal of the adversary, the attackers. But in our long experience, we do not trust any offers from the attackers because deception is the way they operate."

Hifter's eastern-based forces launched a fresh offensive in Tripoli in April, sparking a flurry of diplomatic efforts to try to contain the crisis in the North African nation.

The east-based government, backed by Hifter's forces, is supported by the United Arab Emirates and Egypt, as well as France and Russia. The western, Tripoli-based government receives aid from Turkey, Qatar and Italy.

The fighting has threatened to plunge Libya into violent chaos rivaling the 2011 conflict that ousted and killed longtime dictator Moammar Gadhafi.

Russia and Turkey have been accused of exacerbating the conflict in Libya by giving military aid to its warring parties.