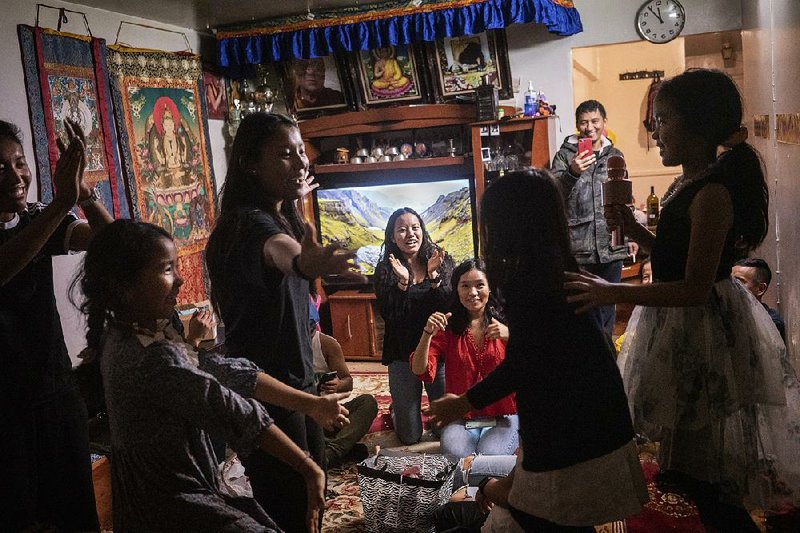 A birthday celebration takes place Dec. 14 in an apartment building in Brooklyn that is home to about 50 speakers of Seke, one of the world’s most obscure languages. The building is a microcosm of life back home and a bastion of the language.

NEW YORK -- The apartment building, in Brooklyn's Flatbush neighborhood, is a hive of nationalities. A Pakistani woman entered the elevator on a recent afternoon with a big bag of groceries, flicking a dupatta, or shawl-like scarf, over her shoulder as a Nepalese nurse and the janitor, a man from Jamaica there to mop up a spill, followed her in.

It was hardly an unusual scene in New York, one of the world's most diverse cities. But this nondescript, seven-story brick building is also the home to some of the last speakers of a rare, unwritten language from Nepal that linguists worry could disappear within a generation.

The language, Seke, is spoken in just five villages cloistered by craggy cliffs and caves in a part of Nepal called Mustang, a region close to the border with Tibet.

There are just 700 or so Seke speakers left in the world, according to a recent study by the Endangered Language Alliance, a New York-based organization dedicated to preserving rare languages in the city.

Of those, about 100 are in New York, and nearly half of them live in the building in Flatbush.

"I live on the fifth floor. My uncle lives on the second. My cousins live on the sixth, and a family friend lives on the first," said Rasmina Gurung, 21, who arrived in New York eight years ago from Chuksang, one of the five villages in Nepal where Seke is spoken and that is known for its apples.

Other Seke speakers live in another building in Flatbush or are scattered across Queens.

Seke is one of 637 languages and dialects that the Endangered Language Alliance has identified as being spoken across the five boroughs of New York and in New Jersey, which also has a diverse, global population.

The Endangered Language Alliance considers a language in peril when there are fewer than 10,000 speakers worldwide. Aside from Seke, other languages in New York that fit that criteria include Vlashki, of Croatian origin, and several Jewish Neo-Aramaic languages, which come from Iran and Iraq.

Another language, Wakhi, from eastern Iran as well as parts of Pakistan, China, Tajikistan and Afghanistan, is believed to be spoken by fewer than a handful of people in New York, according to the language alliance.

One speaker, Husniya Khujamyorova, 31, who works as a linguist at the organization, is writing children's books in Wakhi in the hopes of passing down the language, which is spoken by about 40,000 people worldwide. "People like me, they move at an early age from their country," Khujamyorova said. "There is not enough material to pass their language to the new generation."

Even if a language is spoken by only a few people, language experts say it still plays a vital role.

"It's absolutely invaluable to document, analyze, understand and maintain the linguistic diversity of the planet," said Ross Perlin, a director of the language alliance and an adjunct professor of linguistics at Columbia University. "But we also see it as a matter of justice -- languages are not dying a natural death. They're disappearing because people have been marginalized and pressured and made to feel bad to speak their language, or they're swamped by a dominant language."

"Just like diversity with the environment, language loss represents an immense tragedy for the world," he added.

As for Seke, which means "golden language," legend has it that it was passed down from people living in the snowy peaks of the Himalayas who settled in Mustang, a former kingdom whose terrain was formed, so the story goes, from the heart and innards of a demon defeated in battle by a Buddhist monk.

The apartment building in Flatbush where a number of Seke speakers now live is a microcosm of life back home and a bastion of the language.

Many of them were former apple growers who left after harsher winters and erratic precipitation related to climate change made it increasingly difficult to earn a living. In New York, they mostly work as manicurists, construction workers and cooks.

Inside their apartments, it looks as if their former homes had been transported virtually undisturbed from thousands of miles away.

On a recent visit, offerings were laid out under a framed photo of the Dalai Lama that hung above a large plasma television. A thermos used to serve hot butter tea, a traditional drink of Nepal, stood on a table nearby, and the smoky fragrance of chumin, a Tibetan incense, blended with the smell of Indian spices from the kitchen.

Gurung, who is a nurse, has taken it upon herself to be the de facto preserver of Seke, a language she says many young Nepalese are losing touch with. Children in Nepal are often sent to schools in cities like Kathmandu and Pokhara, where Nepali is predominant.

And Nepalese television is often flooded with Bollywood movies, so many Nepalese absorb Hindi as well. (In addition to English and Seke, Gurung speaks Nepali and Hindi fluently.)

In New York, young Nepalese, like Gurung's cousins, speak very little Seke. She says she is the most fluent speaker among the diaspora's younger members and has been helping the Endangered Language Alliance compile a Seke-English dictionary.

"It's hard, because there are so many words you don't think about in your everyday life -- like the word 'soul.' Who thinks about the soul? I had to ask my uncle," she said. "I'm the youngest person holding Seke together. That's why I feel so much pressure. I need to get as much knowledge as possible. And fast."

Nyaka Gurung expressed alarm and resignation about how quickly the tongue of his forebears is vanishing. "It's scary," he said, as he fingered a Tibetan rosary. "Seke is just going to be a story that you tell your kids: 'Oh, there was once something called Seke.'"

Gurung interjected. "Nepali is the invader," she said, though adding after some reflection: "But it's not their fault. We give power to a language because we use it. If we were vigilant, we'd say, 'No, I'm going to speak Seke.' But we gave in to the influence."

"It's language suicide," said Nawang Gurung, who is not related to the other Gurungs and does not live in the Flatbush building. The Himalayas are being "colonized by the national language, and this kind of dialect becomes invisible."

Nepal is currently led by a coalition of moderate communists and former Maoists, and the government has cracked down on opponents, setting off a recent exodus to New York. Nepal became a republic in 2008, ending three decades of civil war and a 240-year-old monarchy. That same year, Mustang, which had its own separate royal family, gave up its king.

Other factors are also causing Seke's demise, said Gurung, the translator. In New York, native speakers tend to work long hours with little time to teach their children -- and there are no cultural or language centers.

In a recent YouTube video posted by the Endangered Language Alliance, Jamyang Gurung, who has lived in the United States for 17 years, said he now stumbles when he speaks Seke. "I have all the dialects mixed up," he said, adding that his son does not speak any Seke. "After 10 years or after my generation, our language will vanish."

Still, Gurung, the translator, was somewhat hopeful that Seke speakers in New York could help preserve the language, even if only for a little longer, because they were crowded together. "Back home, it takes two days by horse-ride and long hours of walking to reach a village," he said. "Over here, it just takes two stops on the subway."