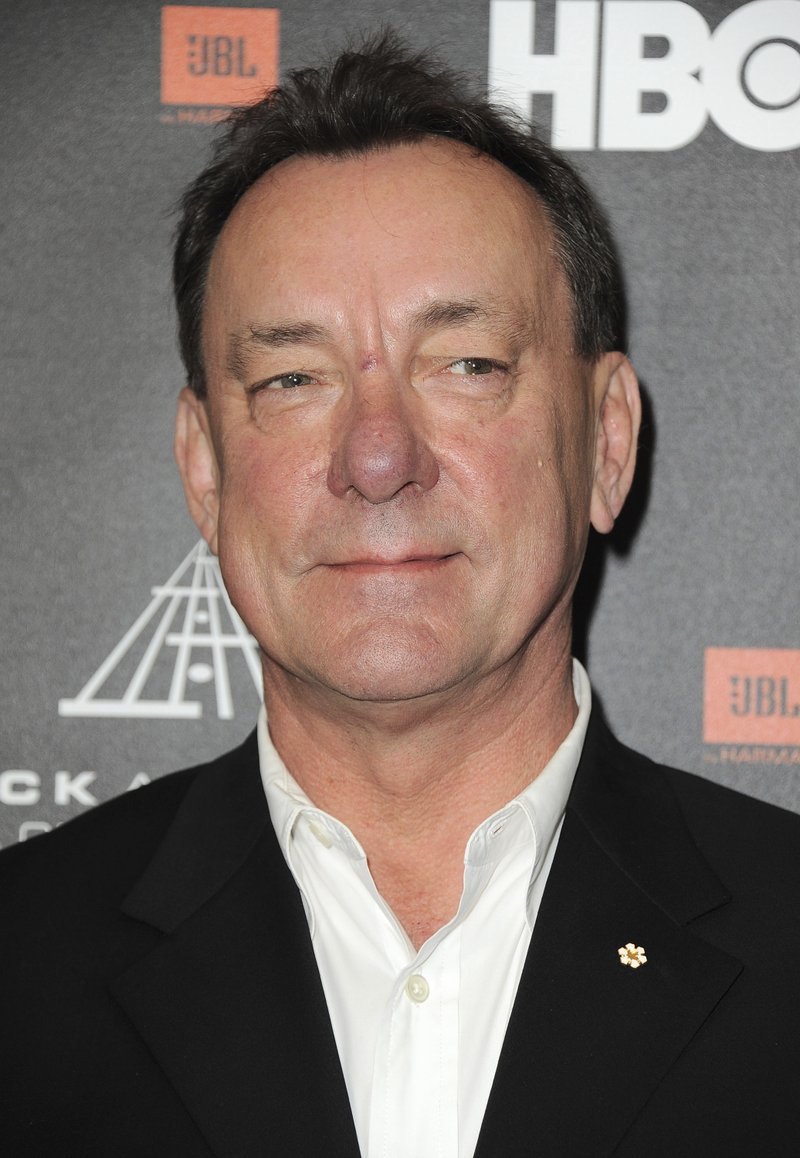 FILE - This April 18, 2013 file photo shows Neil Peart at the Rock and Roll Hall of Fame Induction Ceremony in Los Angeles. Peart, the renowned drummer and lyricist from the band Rush, has died. His rep Elliot Mintz said in a statement Friday that he died at his home Tuesday, Jan. 7, 2020 in Santa Monica, Calif. He was 67. (Photo by Jordan Strauss/Invision, File)

His representative, Elliot Mintz, said in a statement Friday that Peart had died at his home Tuesday in Santa Monica, Calif. The band posted a message on Twitter to confirm the news.

"It is with broken hearts and the deepest sadness that we must share the terrible news that on Tuesday our friend, soul brother and band mate over 45 years, Neil, has lost his incredibly brave three and a half year battle with brain cancer," the band wrote. "Rest in peace brother."

Rolling Stone ranked Peart as No. 4 on its list of 100 Greatest Drummers of All Time. His percussion skills, though, were matched by his talent with lyrics as Rush composed songs that explored the human condition or conjured up mysterious realms beyond the life of the band's heyday in the 1970s, '80s and '90s.

Peart was precise, deliberate and skilled behind his sprawling drum kit, but his innovative lyrics helped set Rush apart from other progressive rock bands.

Rush was a power trio that rock had never quite seen before, with the searing guitar work of Alex Lifeson; the bass, keyboards and vocals of Geddy Lee; and the fantastical drumming of Peart. The band still finds airplay today with anthems such as "The Spirit of Radio" and "Tom Sawyer."

The band was inducted into the Rock & Roll Hall of Fame in 2013.

[Video not showing up above? Click here to watch » https://www.youtube.com/watch?v=nICgCOJ7BS8]

"We've always said it's not something that meant a lot to us, but we knew our fans cared so much to be validated like that -- that their favorite band, like their favorite sports team, should be celebrated as champions," Peart said at the time.

Peart was born Sept. 12, 1952, in Ontario, Canada. Music became an outlet for the self-described introvert.

"I was very academic until I discovered drums," he said in a 2017 interview with Classic Rock magazine. "Then I was a monomaniac about drumming. I was physically awkward. My ankles were weak, so I couldn't play any sports. I couldn't skate and I couldn't play hockey, which in Canada is like football is in the U.K. And that makes you a pariah as a boy."

During a 2018 interview with The Guardian,Lee described working with Peart's lyrics, saying: "Being an interpreter for Neil has been a singular pleasure of mine and a really difficult job at the same time, because I'm not always on the same page as him. As we grew as a band, I became trusted by him to be his sounding board and his editor, and if I couldn't get into a thing, he would leave it alone. That's the beauty of a relationship that lasts."

Peart was also an author, publishing six books. At one point in the 1990s, he took jazz drumming instruction, explaining to Classic Rock: "After 40, 45 years of playing, I wanted to push myself and open up this whole new frontier. I've been able to do that as a lyricist and as a prose writer, and now as a drummer. You have to challenge your own limitations and your own expectations of yourself."

In 2015, Peart announced he was retiring from touring, saying he was struggling with ailments and was concerned he would not be able to play in top form.

Peart is survived by his wife, Carrie, and their daughter, Olivia Louise Peart.

Information for this article was contributed by Dave Zelio of The Associated Press.