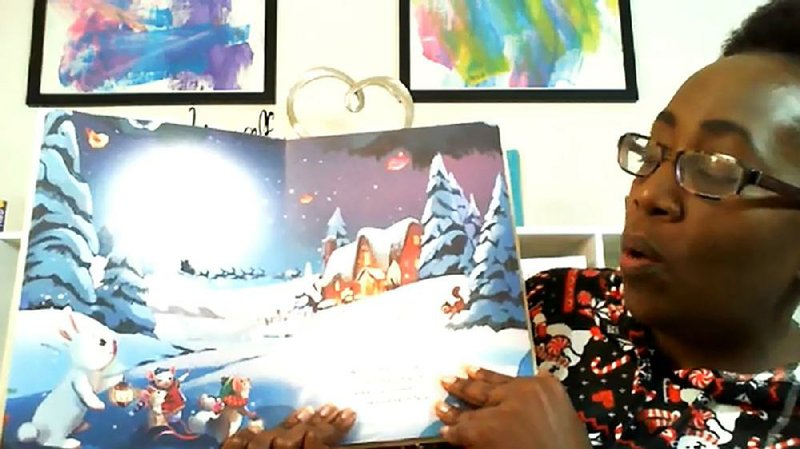 Long after leaving the classroom and returning home, second-grade teacher Keisha Yearby of Chesapeake, Va., switches on a laptop in her spare bedroom to deliver to children a nighttime ritual she cherished as a little girl: a bedtime story.

On Tuesdays, the B.M. Williams Primary schoolteacher logs on for a new episode of Ms. Yearby's Reading Adventures, broadcast on Facebook Live where viewers -- often schoolchildren connecting through a parent's account -- can interact with her in real time by posting comments.

"Happy Tuesdayyyy!" Yearby sang, stretching out the words with vibrato, during an episode Christmas Eve. "How are you, great ones?"

In an age when video games, television shows and devices vie for children's attention, Yearby's homemade show has developed a surprising following. She began the program in March for her own pupils but now has viewers in California, Florida and South Carolina who have no connection to B.M. Williams Primary. The shows, which last about 20 minutes, have drawn up to 800 viewers at times.

Study after study has extolled the value of caretakers reading aloud to children. Some experts advise starting the ritual when babies are as young as 8 weeks old, and continuing even after children have learned to read. Reading aloud can help bond a caretaker to a child, boost social and emotional development, improve children's literacy skills as they begin to read and even spur conversations about difficult topics, including race.

Yearby decided to start reading to children online after she met parents who said they were fearful that they did not know how to help their children keep up in school. B.M. Williams is a Title I school, which means many of the pupils come from low-income households.

Yearby was inspired by Belinda George, a school principal in Beaumont, Texas, who reads to students over Facebook Live weekly in a program called Tucked-in Tuesday.

She also drew from her own love of reading, which began when she was a child. Growing up in Chicago, Yearby would tote a Fisher-Price audiocassette player around the house and listen to children's audiobooks.

"I loved the sound effects," Yearby said. "I can still hear them now."

Parents laud Yearby's ability to convey over the internet the enthusiasm she displays in the classroom. Yearby said she aims to do more than just help children learn how to read. She closes each episode urging children to be good to their parents and classmates, and to be grateful for the things that make them happy. She said she worries that with the increased focus on standardized testing, teachers are losing out on the opportunity to teach students how to be good friends, and how to cope with challenges.

Quiana Thurston, a member of the B.M. Williams PTA, said all three of her children watch the show, even though only one, 7-year-old Jayden, is in Yearby's class. Jayden crowds around a laptop in the kitchen with his 10-year-old brother, Elijah, and 5-year-old sister, Amiyah, watching Yearby with rapt attention and tapping out responses to the questions she asks. Thurston said it heartens her to see that the show has created an opportunity for her children to bond, in addition to boosting Jayden's reading skills.

"They make it a big family thing," Thurston said. "My kids have really enjoyed watching her read the stories."

Monique Womack's daughter Zoë attended B.M. Williams Primary last year and now goes to Crestwood Intermediate. Even though the third-grader has never had Yearby as a teacher, she heard about the program and got hooked. She continues watching even though she is no longer at the school.

Womack said Yearby's program is not just for children learning to read. The stay-at-home mother has learned plenty from the way Yearby reads books online. The teacher will often cover up photos to teach children to focus on the letters, and she peppers her readings with questions for viewers, who can tap out their answers in a comments box in real time.

"As much as it's geared toward the children, the parents can pick up more than what you would think," Womack said. She has learned, for example, what kinds of questions to ask to ensure her daughter understands the book they are reading together.

On Christmas Eve, Yearby read the classic The Night Before Christmas.

"'Twas the night before Christmas, when all through the house / Not a creature was stirring, not even a mouse," Yearby read. Then, she paused: "What's that mean, 'stirring?' Give me another word for 'stirring.'"

And later, she read: "I heard on the roof / The prancing and pawing of each little hoof."

"What would you do if you were lying in bed, and you all the sudden hear that on your roof?" she asked.

On one Tuesday, she read Ruby's Worry, an illustrated book about a little girl troubled by anxiety that follows her around in the shape of a yellow cloud. At the conclusion of the book, she asked students to name something that made them happy. "i am happy that i can see my dad agen," one student wrote.

"My daughter and how far she has come," a parent typed. "Makes me happy."

"You're beautiful," Yearby told the viewers at the end of the episode.

And then, she gave them homework: "I want you to do one thing today to make someone else smile."