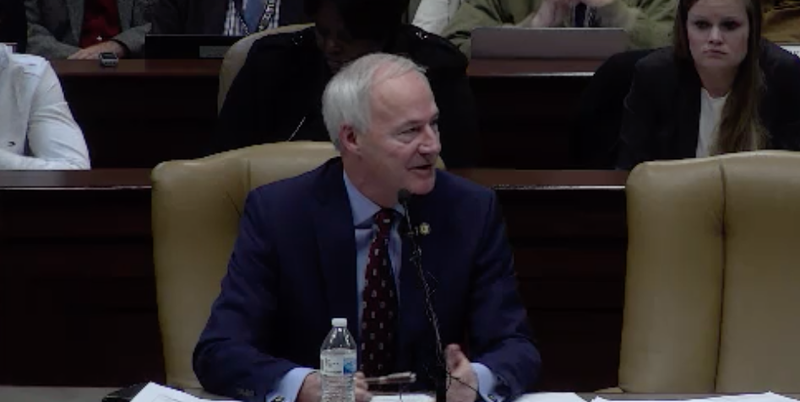 Arkansas Gov. Asa Hutchinson speaks on Monday to a legislative committee in this screenshot from a live stream of the meeting.

Gov. Asa Hutchinson told a legislative committee that fewer than 50 refugees will likely be resettled in Washington County in Northwest Arkansas under his decision.

Arkansas is among 42 states that have said they will continue to accept refugees since the Trump administration issued order in September that gave state and local governments the authority to refuse to accept them for the first time in history.

"Each of you are leaders in your community. You've got a choice to make: You can create fear or you can help resolve fear," Hutchinson told lawmakers. "I challenge you to help resolve fear, have the facts, and to talk about those."

Hutchinson was asked to appear before the panel by some GOP lawmakers who had criticized his decision, which he announced last month. Hutchinson said he trusts the federal government's screening of the refugees and said he views them as an economic benefit to the state.

Hutchinson introduced lawmakers to two refugees from Congo and another from Afghanistan who have resettled to Arkansas in recent years.

"If we say no to them, then we lose the talent, the entrepreneurship, and humanity of those who love America. Yes, they can go elsewhere, but Arkansas will benefit from their presence," he said.

Hutchinson's comments came days after Greg Abbott, the Republican governor of neighboring Texas, said his state would be the first under Trump's order to no longer accept new refugees. Tennessee's Republican governor, who has decided to keep accepting refugees, last week also cautioned members of his own party to not fall to "misinformation."

Some GOP lawmakers said they were caught off guard by Hutchinson's decision, especially after his opposition in 2015 to accepting Syrian refugees. Hutchinson said the Trump administration has since put more limits on the number of refugees resettled in the U.S. and has changed the priorities on resettlement. He also said vetting and security checks have since "dramatically" increased.

Lawmakers said they still had questions after the hearing and wanted more details on what gave the governor more confidence in the vetting process.

"This isn't an issue to create fear. This is about legitimate security concerns and having a major change happen and people not being informed," said Republican state Sen. Trent Garner, who had requested the meeting.

Refugee advocates said they were heartened by Hutchinson's remarks and hoped they would help the public understand resettlement better.

"I hope that as people ask questions and as they learn the truth, they will come to feel the same way I do about this program, that it is part of what makes this country great, it's part of what makes our state great and it's absolutely something that should continue," said Emily Crane Linn, executive director of Canopy Northwest Arkansas, a nonprofit refugee resettlement agency.