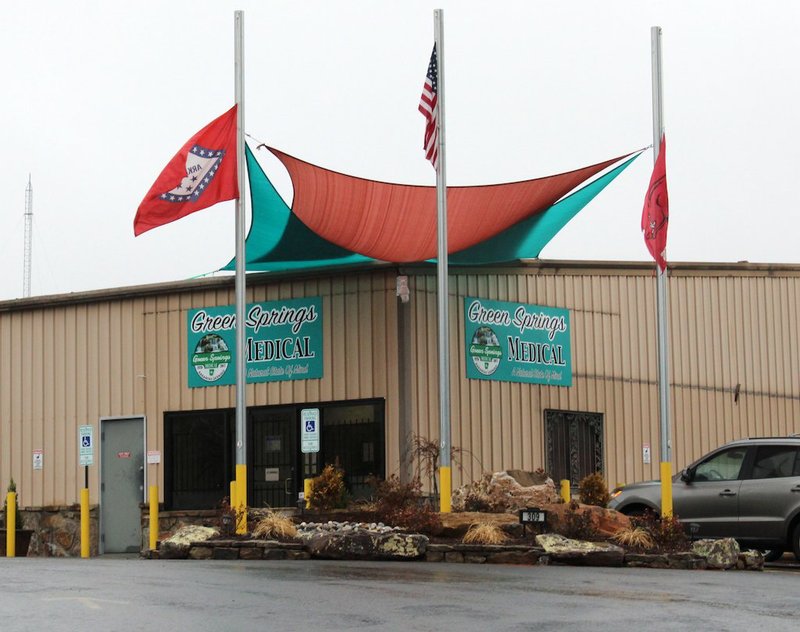 HOT SPRINGS -- The director of the agency regulating Arkansas' medical marijuana industry is expected to rule this week on a local dispensary's appeal of violations it was cited for after a July inspection, the state said.

The appeal is at the center of a disagreement between the partners of Green Springs Medical, Hot Springs' only licensed medical marijuana seller. It's one of several disputes that has played out in the lawsuit Bruce Simpson filed in September against dispensary partner Dragan Vicentic.

According to court records and testimony from a four-hour hearing in October, Simpson claimed Vicentic forced him out of the business shortly after it became one of the first locations to legally sell marijuana in Arkansas. Vicentic has stipulated the parting was mutual.

Special Judge Ted Capeheart ruled in November that half of the dispensary's profits be set aside for Simpson while his lawsuit proceeds. A sales report the state issued Thursday showed that through Wednesday Green Springs had accounted for 1,129 of the 4,735 pounds sold statewide since the state's initial sale of medical marijuana in May.

Green Springs was the second location to open and has sold more than twice the weight of the second-leading dispensary. The 14 dispensaries in operation statewide reported $31.32 million in sales through Wednesday.

Capeheart also ruled Simpson be granted an equal say in how the business is run while the lawsuit works toward a resolution. Vicentic appealed the ruling to the state Court of Appeals and has asked the lower court to stay its ruling. He filed a request earlier this month to continue the trial from its April date to early next year.

Finding common ground on how to proceed with the appeal Vicentic, who holds the dispensary's license, lodged with the Alcoholic Beverage Control Division of the Department of Finance and Administration has divided the partners.

Simpson argued the appeal could jeopardize renewal of the dispensary's license, which expires at the end of June, and urged Vicentic to accept the state's settlement offer. Vicentic said Simpson's concerns are overstated, asserting the violations are minor and that challenging them won't affect renewal of the license.

Vicentic presented his appeal during Wednesday's administrative hearing before Alcoholic Beverage Control Director Doralee Chandler. Most of the violations concern improper product labeling and failing to limit access to restricted areas. Notes included on the checklist from the July inspection said no names were listed on visitor badges, no camera was present near the dispensing area, and jars and bags were not labeled correctly.

"Following a full review of the information presented [Wednesday] along with testimony, ABC Director Chandler anticipates a decision will be issued early next week," finance department Communications Director Scott Hardin said. "Director Chandler could determine the violations remain in place as initially issued or they could be reduced based on information obtained in the hearing."

Vicentic has the option of appealing Chandler's decision to Alcoholic Beverage Control's board.

The petition local attorney Q. Byrum Hurst filed on Vicentic's behalf seeking to dismiss the violations said rules put into effect by the Medical Marijuana Commission were interpreted too broadly by Alcoholic Beverage Control. Enforcing them without regard to risks associated with selling a federally illicit product could undermine the new industry and the will of voters who passed the state's Medical Marijuana Amendment in 2018, the petition said.

"Opening a cultivation center or dispensary risks the substantial investment of lawful assets by connecting them to a federally prohibited enterprise," the petition said. "Under federal law, property used to facilitate a violation of the Controlled Substance Act, and any proceeds of selling a federally controlled substance, are subject to potential forfeiture. Marijuana itself, of course, is contraband.

"Adverse licensure action that might compromise the protection of state law would tend to frustrate further investment in dispensaries and cultivation centers and the intent of voters in passing Amendment 98."

The petition said Green Springs' position on the vanguard of the state's foray into medicinal marijuana meant it was operating without knowing how regulations would be applied.