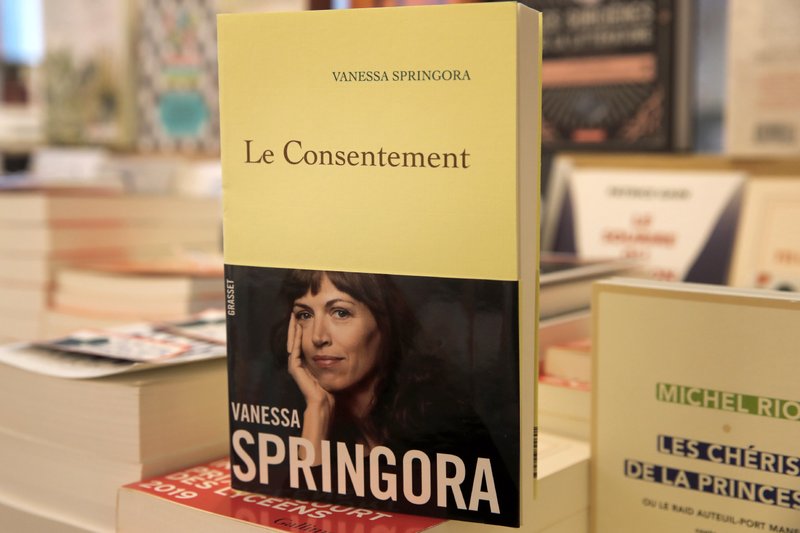 This photo taken Thursday, Jan. 2, 2020 shows the book &quot;Le Consentement&quot; (Consent) by Vanessa Springora and displayed in a Boulogne Billancourt bookstore, outside Paris. The literary editor alleges that she had a destructive underage sexual relationship with feted French author Gabriel Matzneff, now in his eighties. (AP Photo/Christophe Ena)

PARIS -- He was a middle-aged French author becoming known, even celebrated, for writing about sex with children. She was a 14-year-old, too young to foresee the damage she says was done to her life by his predatory grip on her body and mind.

Now a grown woman, Vanessa Springora is causing a literary, legal and cultural storm in France with her book that alleges, in cutting detail, an underage and destructive sexual relationship with French writer Gabriel Matzneff, now in his 80s.

The publication this month and quick commercial success of Consent is also being hailed by child-protection activists as a possible watershed moment for France. The book has ignited renewed debates about the country's permissive attitudes toward sex with minors and questions as to why Matzneff was long celebrated in Paris.

"This is a very important book. It's France's #MeToo moment," said Homayra Sellier, an advocate for child victims of sexual violence with the group Innocence in Danger.

Matzneff is rapidly becoming a pariah in the wake of the book's publication and is now the target of a rape probe by Paris prosecutors. Yet for years he was a frequent guest on French TV and radio. He was awarded a prestigious literary prize as recently as 2013 and honored by the French government with medals and an annual allowance.

But for the teenage Springora, Matzneff was the 50-year-old for whom she developed a schoolgirl crush after her mother, who worked in publishing, dragged her to a dinner party. There, she met and was bowled over by the writer who seemed to have eyes only for her. She alleges he then set about grooming her until he was habitually waiting at her school gates so he could take her away for sex in his flat or a hotel.

Matzneff has defended himself in an essay, which L'Express magazine published in full. He wrote that he will not read Springora's book, describing it as "a dagger to the heart" that is "intended to harm me, to destroy me," and which "tries to make me out as a pervert, a manipulator, a predator, a bastard." He described his relationship with Springora when she was "my young lover" as one of the "passionate loves" of his life.

Springora said it was Matzneff's own writings that helped break his hold on her.

While he was away on a trip, she read his descriptions of having sex with other children, works he had told her not to look at. They punctured her illusions that their relationship was a special romance.

"His books were populated by other 15-year-old Lolitas," Springora writes, recalling how the blinders fell from her eyes. "This man was no good. He was, in fact, what we are taught to fear from childhood: an ogre."

Jacques Toubon told the talk show Quotidien that he regrets his decision as culture minister in 1995 to decorate the writer with France's Arts and Letters medal. The current culture minister, Franck Riester, now says Matzneff should no longer receive the annual state allowance for which he is eligible as a renowned author, calling him "the eulogist of pedo-criminality."

While Springora's book is flying off the shelves, already in its seventh printing after a week on sale, publishers who for years backed Matzneff are running in the other direction. They are withdrawing his writings, including The under 16s, a shock essay first published in 1974.

Child-protection activists want to believe the reaction to Springora's book shows that French attitudes are changing. They're also gratified by the refocused attention on Matzneff, a writer who had been allowed to slowly slide into relative obscurity, becoming unknown to many younger readers and seemingly freed of the risk of the legal and financial entanglements he now faces.

"It was very hard to watch him being praised to the skies by everyone," said Sellier, who wrote to then-President Francois Hollande in protest after Matzneff won the prestigious Renaudot literary prize in its essay category with few complaints in 2013. "It was shocking," Sellier said. "It is shocking. Everyone looked the other way for 30-40 years."

Child rights activists hope the outcry over her book could boost efforts to toughen child protections in France. They have been unsuccessful so far in getting a statutory rape law that would remove rapists' ability to argue that children consented to sex. Some French courts have refused to prosecute men for rape because authorities couldn't prove that children were coerced, cases that have exposed legal loopholes that are still open to abusers.

For Springora, the book is her way of turning the tables and having the final word.

"What has changed today," she writes, "... is that after the liberation of moral standards, the words of victims are also liberating themselves."