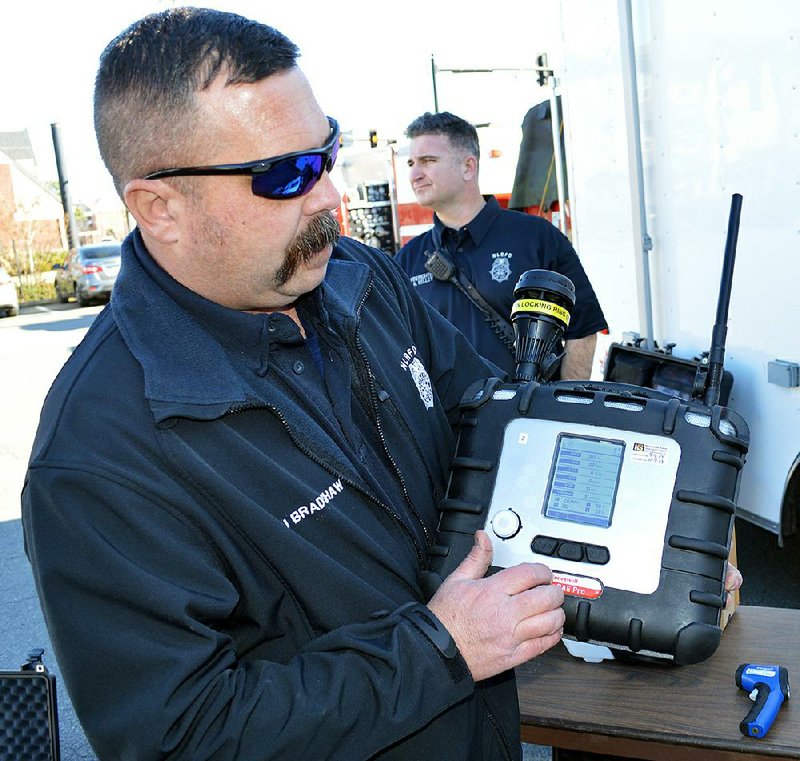 North Little Rock has invested millions of dollars in its Fire Department over the past few years to create one of the most prepared disaster organizations in the state, officials said.

The department has received more than $36 million over the past two years, and part of that is being used to beef up its specialized units.

The department currently has the equipment needed to respond to anything from water rescues to natural disasters and potential terrorist attacks, said Beau Buford, assistant fire chief.

"We hope to never use most of this, but we are ready if we do," Buford said.

New equipment obtained for the hazardous materials team in the past two years ranges from non-sparking tools to body cameras and an advanced computer monitoring system that allows firefighters to monitor air quality.

Team leader Capt. Edwin Faubion said the technology lets the team track potentially dangerous chemicals as they spread across the city. That will help the team conduct evacuations more efficiently, evacuating the most at-risk areas rather than trying to get everyone out of the city at once.

[Video not showing up above? Click here to watch » https://www.youtube.com/watch?v=nIosDcMo32Y]

The most advanced piece of equipment obtained recently is an electrostatic decontamination sprayer that neutralizes a wide range of toxic chemicals.

"We can spray a person and wipe them off, and it neutralizes any threat without even using water," team member Justin Bradshaw said. "The box will tell us how long the chemical needs to be on a person to neutralize any biological threat from the flu to Ebola."

Buford said the need for a full decontamination unit would be minimal if the department had more electrostatic sprayers.

The hazardous materials team was formed in 2001, but Faubion said groundwork for it began in the 1980s after a scare involving a train.

"It was on New Year's Eve in 1980, and there was a leak on one of the rail cars," he said. "We thought it might be ethylene oxide, which is very explosive. Turned out to be excess water from one of the tanks, but we didn't know [that] at the time of the incident."

Faubion said the team's main areas of concern in North Little Rock are places like the rail yard, the highway system, and facilities that contain hazardous materials or fuel tanks. He said most of the team's work is containing oil spills and answering occasional calls to the rail yard.

"We also use our equipment to test the air quality of a house when someone smells a strange odor," Faubion said. "It gives people a sense of comfort to be able to see for themselves the air quality inside their house."

The team is classified as a Type 3 response unit as defined by the Arkansas Department of Emergency Management, but it is moving toward becoming one of a handful of Type 2 teams in the state. The difference between the two types is the amount of training.

"All the equipment is purchased," Buford said. "We need a few more classes to become a Type 2 team."

Additional funds also have been used to equip the special operations team with such things as trench rescue equipment, concrete chain saws and sound rescue systems.

"The sound rescue system is important, because if there was a building collapse scenario, we can hear victims and immediately go to them instead of digging around aimlessly," Buford said. "If we had a tornado or something hit the city, this would be extremely important equipment to have at our disposal."

The special operations team was formed in 1998 and has 37 members. All are trained in core rescue, confined space rescue, high- and low-angle rescue, trench rescue and building collapse. Each discipline requires 24 hours of continuing education.

"These are the best-trained people in the state," Buford said. "During the flooding, we had other counties and cities calling us seeing if we could deploy them to their area if they were needed."

Battalion Chief Rick Albers said the special operations team will be called on for any kind of technical rescue beyond a house fire. The team handles mostly rope rescues, such as when someone has fallen from a high area or gotten trapped on the side of a bridge.

"We get called out to Emerald Park quite a bit," Albers said.

Curriculum and testing for all the disciplines at the state Fire Training Academy were developed by members of the North Little Rock Fire Department.

"Our goal is to train harder than any real-life incident," Capt. Wesley Stephens said.

Albers said the department's most difficult rescue involved a woman who fell off a cliff at Emerald Park and was lying on a ledge. A member of the rescue team had to conduct life-saving techniques on the gravely injured woman while hanging from a rope high in the air.

"We are trained to do complete patient care, and that includes IVs, drugs, bandaging and all of that," Albers said.

Fire Department officials say they hope to finish work on a large decontamination area and acquire a portable command center this year.

"This is all done to make sure our city is as safe as possible," Buford said.