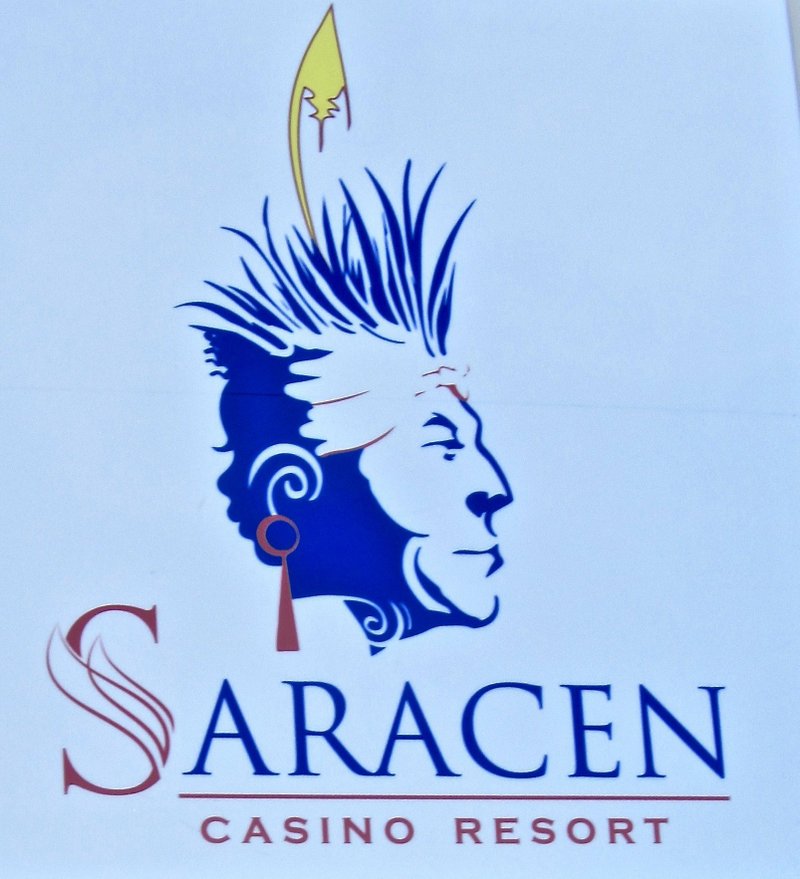 A stylized Chief Saracen is depicted on the facade of Saracen Casino Resorts slot-machine building. (Special to the Democrat-Gazette/Marcia Schnedler)

PINE BLUFF — There is now a second public image in Pine Bluff of a locally fabled American Indian leader, as work proceeds on Arkansas' first legal casino outside the state's two race tracks.

The new portrait is a stylized sketch of this chief on the facade of Saracen Casino Resort's 300-machine slots parlor. The gambling room has been open since September while construction of the Quapaw Nation's main casino and hotel complex continues on the city's southeast edge. The full opening is targeted for this summer, creating more than 1,000 jobs.

A more detailed portrait of Chief Saracen and the roots of his fame can be viewed in decrepit downtown Pine Bluff, where a few buildings have collapsed in recent years. He is shown in one of 11 surviving murals, painted since 1992, that are a source of pride and joy here. Some have been restored in recent years, while others are in need of repair. They make for refreshing and informative time travel to Pine Bluff's more prosperous past.

Saracen was a Quapaw chief. His legend, dating back two centuries or so and pictured downtown, has him rescuing two children of a white trapper family who had been kidnapped by another tribe. The mural shows him with the joyfully reunited parents and youngsters. It was painted by Robert Dafford, an internationally known mural artist.

After war and disease had reduced the Quapaw Nation to about 1,000 members, Saracen signed a federal treaty in 1833 ceding his people's claim to most of modern-day Arkansas. His tombstone at a cemetery in Pine Bluff lists his age at death as 97, although that age is uncertain. 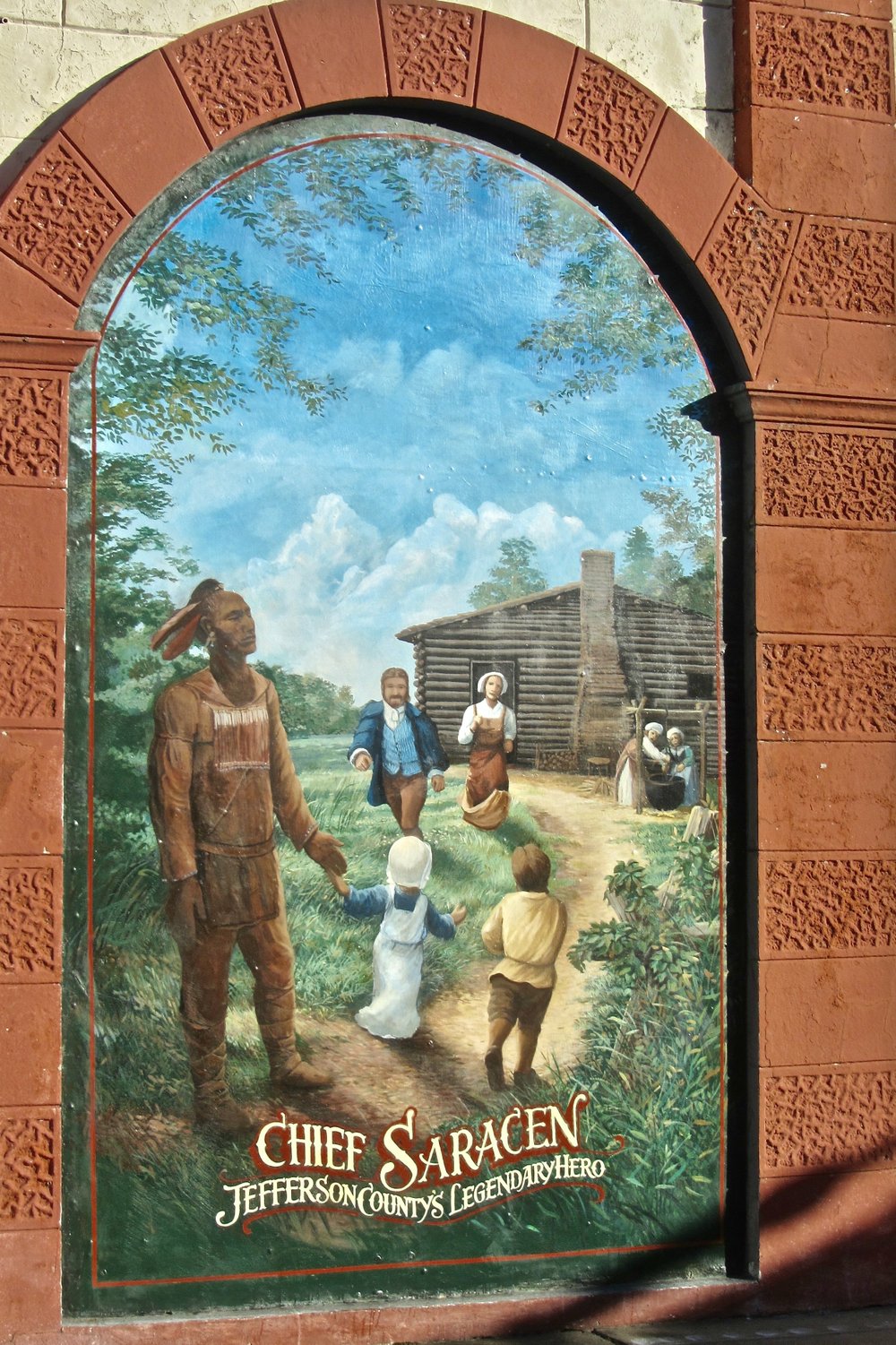 Downtown Pine Bluffs murals include one portraying the legend of Chief Saracen. (Special to the Democrat-Gazette/Marcia Schnedler)

The murals, a project of nonprofit Pine Bluff Downtown Development, were designed with the original aim to "create paintings from realistic versions of actual photographs to form an outdoor art gallery within the business district. The murals will vary in size and style, but they will always be of Pine Bluff's history."

An especially jaunty mural shows Jefferson County's seven automobile owners in 1907 posed with their cars at the north end of Main Street. They were taking a three-day expedition to Little Rock and back in their vehicles. One of the drivers customized his car with wire wheels and a racy body decked out with a pointed rear end.

Much in need of restoration is a sizable mural depicting Freeman Owens and Max Aronson, two figures with roots in Pine Bluff who played notable roles in the early days of the movie industry.

Owens, who was born and died here, is shown operating an antique movie camera. Having served as a combat cameraman in World War I, he changed the movie-making business for good by perfecting the process of putting sound on films.

Aronson was born in Little Rock but later moved to Pine Bluff, and is considered to be the first famous cowboy movie star. Performing as "Broncho Billy" Anderson, he created one of the earliest film production companies. He appeared in the pioneering 1903 Western The Great Train Robbery. Also pictured on the mural are stars Charlie Chaplin, Wallace Beery and Peggy Shannon.

Among the topics of other murals are Pine Bluff's Main Street in the late 19th century, the traditionally black University of Arkansas at Pine Bluff, Jefferson County's timber industry, a former fire station, two local hospitals, and the creation of the state flag by the Daughters of the American Revolution.

Two murals were lost when their buildings collapsed or were torn down. Their topics were the Cotton Belt Railroad and Grider Field, site of the city's airport. The remaining murals remain worth a look as artistic evidence of Pine Bluff's better days, which it is hoped will be revived to some degree once Saracen Casino Resort is in full operation.