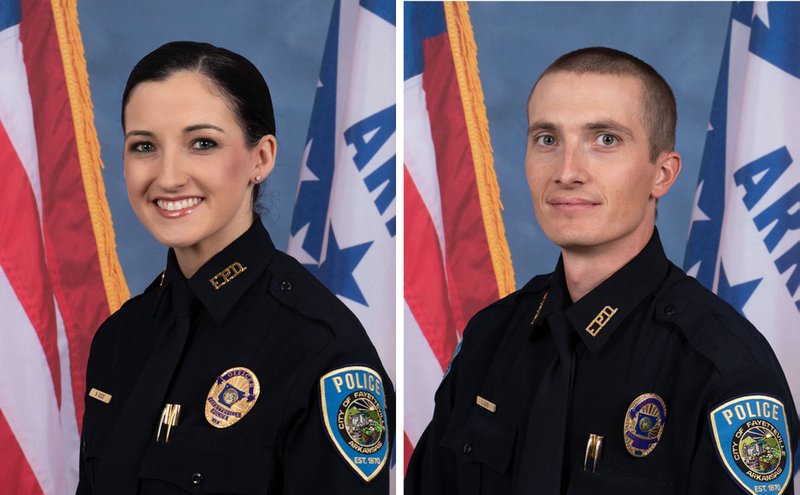 Cpl. Seay Floyd and Officer Natalie Eucce followed Police Department policies and procedures in the shooting of London Phillips, 35, according to a city news release. Phillips shot and killed officer Stephen Carr, 27, about 9:40 p.m. Dec. 7 while Carr sat in his patrol vehicle in the police station's parking lot.

The department's Office of Professional Standards investigated the conduct of Floyd and Eucce and exonerated them of any violations. The investigation showed the officers' actions were justified, lawful and proper, the release states.

The two will return to work upon their next scheduled shifts, Sgt. Anthony Murphy said. They were on paid administrative leave pending the completion of the internal investigation.

Floyd joined the department in 2013. Eucce joined in 2017, and was Carr's partner policing the Dickson Street entertainment area.

Matt Durrett, prosecutor for Washington County, cleared Floyd and Eucce on Dec. 30 of any criminal wrongdoing. The Washington County sheriff's office turned over evidence from its investigation to Durrett, who determined their actions were justified and necessary.

The evening of Dec. 7, officers inside the station heard several shots. Floyd looked out the back door and saw Phillips firing rounds into Carr's vehicle. Phillips saw Floyd, loaded a magazine into his handgun and ran west, according to Durrett. Floyd fired multiple shots at Phillips.

At the same time, Eucce and Sgt. James Jennings came out another door to the east. Eucce saw Carr had been shot and issued an "officer down" call over the radio.

Floyd, Eucce and Jennings followed Phillips into an alley. Floyd saw Phillips crouched, approaching Eucce. Eucce saw Phillips in front of her with a black handgun. Floyd and Eucce fired their weapons, and Phillips died at the scene, according to Durrett's report.

Carr was shot 10 times in the head. Any of the rounds would have been fatal, according to the medical examiner.