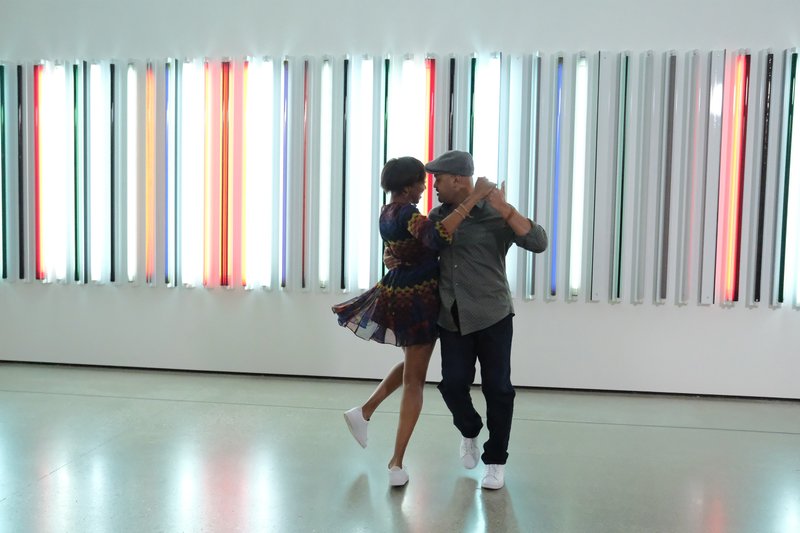 Cy Sharp (left) and choreographer Travis Wall practice her half of a blind-date dance on the second episode of Fox's Flirty Dancing. The series, which was modified slightly for U.S. audiences, is based on a British series of the same name. (Fox/Greg Gayne)

How would it feel to be hoisted into the air by a total stranger? One day last fall, Cy Sharp, a single mother and events manager living in Los Angeles, wrapped her mind — and body — around that question while she rehearsed with choreographer Travis Wall.

She was learning her half of a duet for Flirty Dancing, a dance-meets-dating reality show that brings couples together for wordless blind dates. Their very first meeting is a dance.

Taking physical risks for love is at the heart of Flirty Dancing, an unabashedly feel-good program that began a six-episode season Sunday on Fox. Modified slightly for U.S. audiences, the show is based on a British series of the same name, now in its second season. On both sides of the Atlantic, the general concept is the same: Without speaking, or even knowing each other's names, two strangers share a choreographed dance — they learn their parts independently in advance — and get to know each other through movement alone.

Mike Yurchuk, an executive producer of the Fox series, described the show as a throwback "to an older time, where people would see you from across the room on a dance floor, ask you to dance, and the chemistry that you felt there could be the spark that created a romance."

But while Flirty Dancing seeks to restore some lost spontaneity to dating in an age of apps, it also thrives on an element missing from most dance on television: an emphasis on dancing not as an activity to be perfected and judged by professional standards but as a form of meaningful connection between people. On Flirty Dancing, how dancing looks to an audience matters less than how it feels to the dancers themselves.

Still, in the U.S. version, there is an element of competition: One person searching for love dances with two potential matches — a different duet with each — and chooses one partner to see again. (The British version, more straightforward, pairs two people who can decide to show up for a second date or not.) Actress and dancer Jenna Dewan serves as the host and an earnest matchmaker, standing by in the studio as contestants learn their routines and greeting them in the flushed, breathless moments after their dance dates.

Yurchuk, who has worked on So You Think You Can Dance and other reality competition shows, says Flirty Dancing was inspired partly by the movie La La Land and the city-as-a-backdrop romance of its dance sequences. The duets take place at picturesque sites around Los Angeles, tailored to the architecture of each place, like the steps of the Hollywood Bowl or the lampposts of the Urban Light installation outside the Los Angeles County Museum of Art.

The dance routines "look like little movies," Yurchuk says, adding that he thought the show would "elevate the way people see dance on television."

The participants, who range in age from 21 to 68, might have some dance experience, but they aren't professionals. It's up to the show's choreographers, who include Wall, Tyce Diorio, Kathryn Burns and other big names from the commercial dance industry, to get them feeling comfortable and confident within just a few days. Sharp, featured in Episode 2, says that in addition to rehearsing with Wall, she practiced at home, with coaching from her 9-year-old daughter.

"That week when we were filming, I would wake up at 5 a.m. before my kids got up, and I would practice, and then when they woke up I would make them watch," she says. "My daughter, she does competition dance, and she was like, 'Again, Mommy, again!'"

Sharp came to the show not as a total dance novice but with skills honed from her love of "a good night out in the club," she says. Still, the choreography didn't come easily, particularly moves that required trust, like falling into her partner's arms — or that big lift.

That's another factor setting Flirty Dancing apart from other dance reality shows: It reveals just how vulnerable dancers need to be, how the physical is psychological and vice versa. Wall, who worked on three episodes, says his job as a choreographer went beyond teaching steps.

"You're teaching these people how to let go of their past and to embrace meeting someone new," he says. "The amount of times that people broke down in my arms, crying about the things they thought about themselves, how afraid they are to try this, how afraid they are to let go — this experience is life-changing for them, so you're playing therapist and dancer and choreographer all at the same time."

So can a blind-date dance lead to love? Sharp declined to comment on whether she was still seeing the partner she chose. But she did note that since her Flirty Dancing adventure, she has observed a transformation in herself, whether going out dancing with friends or striding down the street.

"I have not danced the same since the show — it opened me," she says. "I find myself much freer, much lighter. I'm walking through the world a lot different."