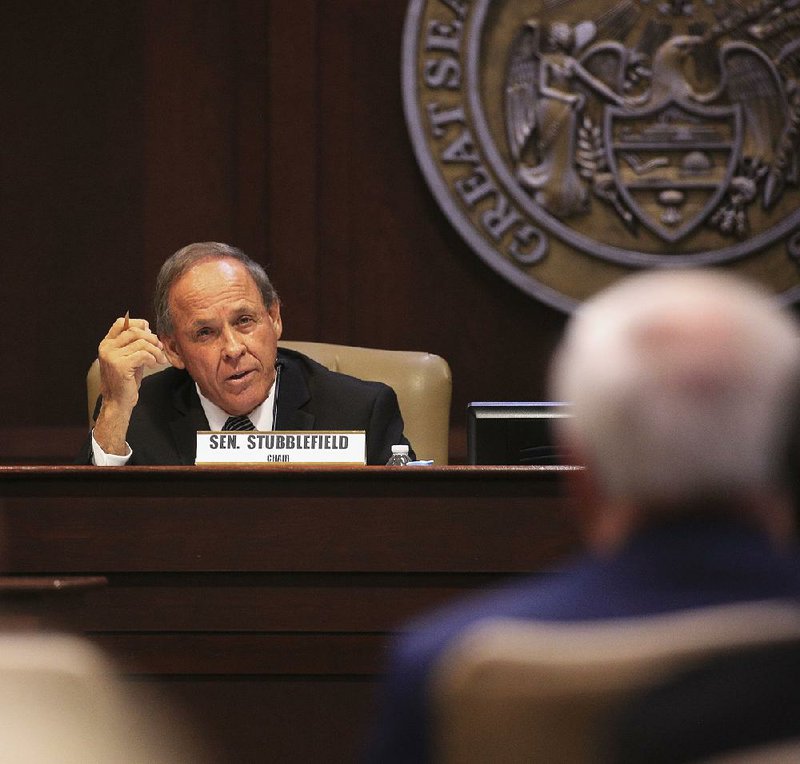 Sen. Gary Stubblefield questions Gov. Asa Hutchinson on Monday at the state Capitol during a committee meeting about the governor’s decision that Arkansas will continue to accept refugees. ( Arkansas Democrat-Gazette / Staton Breidenthal)

Gov. Asa Hutchinson defended to a panel of several skeptical state lawmakers on Monday his decision to permit a few dozen refugees to continue resettling in Northwest Arkansas at least through the end of 2020.

Since the Republican governor announced the decision on Dec. 23, some legislators have questioned whether it's the right move for Arkansas and complained that the General Assembly as a whole was not informed beforehand.

Hutchinson, at a Monday morning meeting of the House and Senate City, County and Local Affairs committees, noted that he has opposed some past efforts to bring additional refugees to Arkansas, but he said that the Trump administration has cut significantly the number of refugees eligible to relocate to the U.S., emphasized the acceptance of refugees who have aided overseas U.S. military personnel and heightened the level of security screenings.

"Each of you are leaders in your community; you've got a choice to make," Hutchinson told lawmakers. "You can create fear, or you can help resolve fear. I challenge you to help resolve fear, have the facts and to talk about those."

Several legislators, led by the Senate committee chairman, Sen. Gary Stubblefield, R-Branch, questioned the governor about whether accepting refugees in the Natural State could divert resources from current residents already in need, such as veterans, adults with disabilities and children living in poverty.

Stubblefield raised doubts about whether refugees and others who have immigrated here have truly assimilated.

"Every morning when I wake up and turn on the national news, I ask myself a question," Stubblefield said. "Am I still in the United State of America? Because I hear some of the craziest ideas, and I wonder where they're coming from."

The refugee issue worked its way into the state's political discourse after President Donald Trump in September signed an executive order that allows states to refuse refugees.

Arkansas in December became one of now 42 states that have agreed to continue accepting refugees, according to The Associated Press. Hutchinson said the state agreed to accept about 50 refugees, approximately the same number of refugees that flowed into the state last year. The program will be reevaluated at the end of the year, Hutchinson said, and he will determine then whether it should continue.

Texas on Friday became the first and only state to decline refugees under the Trump order. Governors in other states are still considering how to proceed; they must inform the U.S. State Department of their decisions by Jan. 21.

The State Department works with the United Nations and several charitable organizations to coordinate the relocation of individuals fleeing religious or political persecution to the United States. Trump recently cut the number of refugees allowed into the U.S. to a historic low of 18,000 in 2020.

In Arkansas, refugees are resettled in Washington County through the resettlement group Canopy Northwest Arkansas -- the only group in the state accepted to work with two of the faith-based organizations that partner with the State Department. Refugee resettlement will be limited to Washington County because it is the only one in Arkansas whose local officials have formally approved the acceptance of refugees. However, refugees are free to move around the U.S. as they please once they arrive.

Canopy has helped resettle 171 individuals since Northwest Arkansas gained approval as a refugee resettlement site in 2016. Those refugees have come from Africa, eastern Europe, the Middle East, and South America. A large majority of those who resettled in Northwest Arkansas -- 97 in total -- fled from the Democratic Republic of Congo, which has been devastated by continuous waves of violent conflicts. Another 25 refugees have come from El Salvador and 11 from Iraq.

Hutchinson introduced several refugees at Monday's hearing who were brought to Arkansas through Canopy. They included a Congolese refugee, who after nearly two decades in a refugee camp in Kenya now lives in Springdale and works as a certified nursing assistant at a senior living facility, and a refugee from Afghanistan who fled his native country after his life became endangered for helping U.S. authorities.

Hannah Lee, Canopy's director of community engagement, said after Monday's hearing that refugees go through a rigorous verification process that includes eight different agencies, six background checks and three in-person interviews. Vetting, she said, typically takes two years from the time a refugee is referred to the U.S. by the United Nations, and that typically follows an average of 18 years in a refugee camp.

Hutchinson, a former undersecretary in the U.S. Department of Homeland Security, reassured lawmakers that he was confident in the federal government's screening procedures.

"A refugee is vetted and has more security checks than any other type of immigrant who comes to the United States," Hutchinson said.

Stubblefield also said that refugees create a burden on the taxpayer, saying that in addition to receiving support upon arriving in the U.S., refugees may also qualify for other government assistance once settled.

"When you consider the fact that Arkansas has one out of four children who go to bed hungry every night and we are ranked as one of the top poor states in the country, can you understand the reaction the public would have when they read about refugees being allowed to enter and the benefits they are being given?" Stubblefield asked.

Hutchinson responded by pointing to a cost-benefit analysis conducted by the Trump administration that found refugees contributed $63 billion more in state and federal taxes than they received between 2005 and 2014. He noted that refugees are typically eager to go to work and become self-sufficient.

"I believe, again to my statement, it's a positive thing that we bring immigrants to our country, that they benefit to us in terms of their work and their paying taxes," Hutchinson said.

State Sen. Trent Garner, R-El Dorado, was one of the first lawmakers to question Hutchinson's decision. He said that while he was grateful for Hutchinson's testimony, there were still many unanswered questions.

He said that the General Assembly could benefit from another hearing with state, federal and nonprofit organization officials who work directly in the refugee resettlement process for a more in-depth discussion about security screening and the actual cost of resettlement.

Some lawmakers thought that Monday's hearing wasn't long enough for a fully developed discussion on the issue. The meeting began at 9 a.m., but Hutchinson left about 9:40 a.m. to attend a ribbon-cutting ceremony, according to his public schedule.

"We probably need to have a multi-hour discussion about this," Garner said.

Garner also encouraged any residents concerned about refugee resettlement to contact their local county and municipal officials to discourage them from agreeing to participate in the State Department program.

Hutchinson said there was no intent to relocate refugees outside of Washington County.

State Sen. Terry Rice, R-Waldron, echoed a sentiment that many lawmakers have expressed in public: frustration that they weren't informed of the governor's decision beforehand.

Rice also said that "skepticism of [Hutchinson's] administration regarding foreign interest" had developed after the governor's son Asa Hutchinson III accompanied him on a foreign trade trip to China, and that skepticism had bled into the refugee matter.

The younger Hutchinson is a managing partner at the Asa Hutchinson Law Group, which represents several Chinese companies that receive incentives from the state.

Rice called the law firm's client relationships "troublesome," and he said that while no illegal activity has been alleged, the situation created concerning "ethical optics."

The governor and his son have said that the work the firm has done on behalf of the foreign companies didn't relate to their recruitment to Arkansas with economic incentives. They've also decried the suggestion that Hutchinson III was hired as a result of his father's position.

Rice asked if the law firm worked with Canopy or any other refugee resettlement organization.

The governor said that he is not associated with the law firm, but he was unaware of any work with refugee organizations. Hutchinson founded the firm with his son, but he no longer has any financial interest or ownership in the firm, according to the Asa Hutchinson Law Group's website.

Hutchinson III in an email confirmed that his group was not involved in refugee work.

"Neither I nor The Asa Hutchinson Law Group, PLC ("AHLG") does any work with Canopy Northwest Arkansas or with any other entity associated with refugee settlements," he said. "AHLG and I have never performed any such work, nor is any such work anticipated to be performed in the future by AHLG or myself." 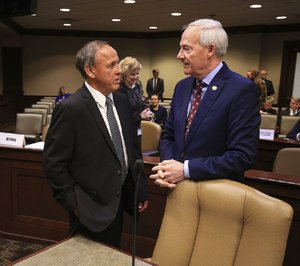