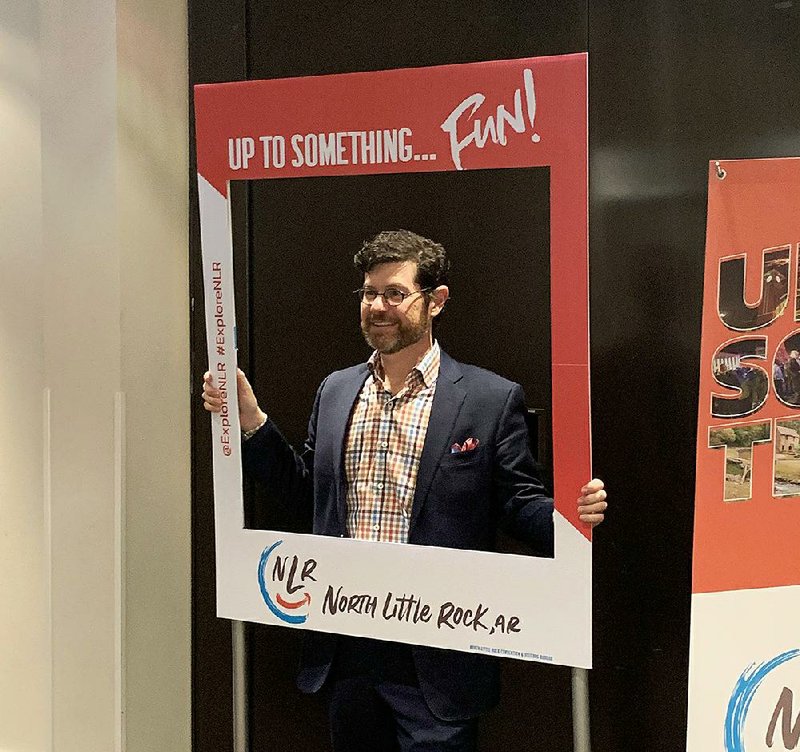 David Allred, a representative with the Stamp Idea Group of Montgomery, Ala., shows off the new logo unveiled Monday by the North Little Rock Convention and Visitors Bureau.  ( Stephen Simpson)

The North Little Rock Convention and Visitors Bureau will focus on the "quirky" side of the city with a new logo and catchphrase that emphasizes the fun that can be had in the city.

About 80 people packed the Argenta Community Theater on Monday morning to get a glimpse of the city's new brand. Included among the crowd was North Little Rock Mayor Joe Smith and Little Rock Convention and Visitors Bureau officials.

North Little Rock's new brand features a smile under the words "NLR" along with the words "Up to Something," which is meant to highlight the weird side of the city, according to Stephanie Slagle, director of marketing for the Convention and Visitors Bureau.

The debut also included a video that used the new brand and tag line, and touted the city's culture and scenic riverfront.

"Our motto is heads in the beds, butts in the seats and feet onto the attractions," said Bob Major, president and CEO of the Convention and Visitors Bureau.

The logo will be included in the bureau's North Little Rock Destination Guide and the city's new brand video. It will appear on the Convention and Visitors Bureau's website, on a trip-planning app that can be downloaded, with in-market and out-of-market print and digital advertising and social media, and at the North Little Rock Welcome Center at 600 Main St.

Slagle said the logo will symbolize a fresh synergy surrounding lodging, attractions, entertainment and restaurants. Cost of the entire rebranding process was $40,000, she said.

The bureau's previous logo was created in 2010 and included the organization's name with three green stars over the letter "N."

Slagle said the bureau decided in 2018 to reevaluate how the department was operating. A yearlong market research project with Gray Research Solutions of Nashville, Tenn., led to the idea of creating a fresh approach for the city.

The organization reached out to the Stamp Idea Group in Montgomery, Ala., to start a six-month rebranding process. It included interviewing guests at North Little Rock lodging properties, visitors at local attractions, focus groups, surveys and industry trend reports.

"Stamp has a lot of experience with smaller cities in the South like Myrtle Beach [S.C.], and we felt like they would do a good job here as well," Slagle said.

David Allred, a Stamp representative, said a team spent several days in North Little Rock learning about the city. He described it as a hands-on process, with the agency asking people to describe North Little Rock. Their research revealed many people viewed the city as "quirky."

Allred mentioned how stories about North Little Rock's past -- including how it ended up with its "Dogtown" nickname -- need to be told because such things set it apart from other cities. "Dogtown" is currently featured in the agency's new destination guide.

"When you tell these stories people smile," he said.

Slagle said the new brand is part of a larger effort that includes distinguishing the city from Little Rock.

"Our research showed that 38% of new visitors didn't even know they were in North Little Rock," she said.

Allred shared how he went on a cab ride in North Little Rock and the driver didn't know how to articulate what the city offered. He also mentioned how a local hotel had "Welcome to Little Rock" signs in all the rooms.

Things like that must change if the city wants to separate itself from the Capital City, Allred said. Slagle said plans call for the agency to work on frontline training for hotels that will include hospitality lessons and explaining to visitors what attractions North Little Rock has to offer.

"Tourism and travel is economic development," Allred said. "We've got to let businesses, drivers, and hotels know what is here. Visitors need to see everything."

The agency also plans to work on adding signage on the various interstates leading into the city that let drivers know when they enter North Little Rock.

The new brand is the latest in a series of updates the Convention and Visitors Bureau has made in its effort to attract more visitors. In early 2019, it launched a mobile-friendly site that included a comprehensive events calendar and more engaging content. Six months later, it launched a trip planning app.

The bureau also will relocate this year to the new North Little Rock Welcome Center, and manage newly opened Argenta Plaza, which is only a block from the bureau's new downtown offices.

"Our goal is to bring people in," Slagle said. "I think these efforts will help do that."