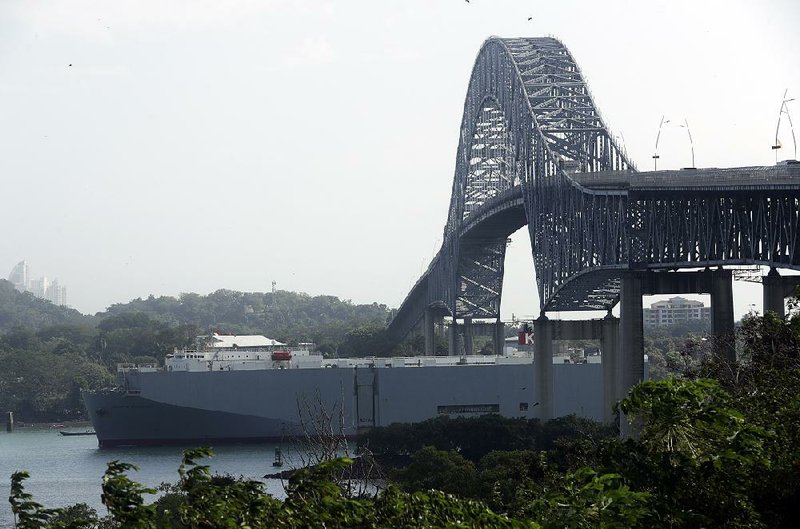 A cargo ship on the Panama Canal nears the Pacific Ocean on Monday as it passes Panama City.

PANAMA CITY -- The Panama Canal will begin collecting a freshwater surcharge from ships transiting the interoceanic waterway, authorities announced Monday, as part of actions to address a scarcity of rainfall after the surrounding watershed recorded its fifth driest year of the past seven decades in 2019.

"It is not an easy decision," Vasquez said. He added that it will "guarantee the availability of water and the reliability of the [canal] route."

The new fee will take effect Feb. 15 and has no expiration date. It applies to all vessels more than 125 feet long and consists of a fixed charge of $10,000 per passage plus another variable charge that will depend on water levels at Lake Gatun at the time of the crossing.

The Canal Authority presented its annual report last week highlighting that 2019 was one of the watershed's driest years in many decades, with rain about 20% below the historic average.

The watershed, a system of rivers and brooks that feed lakes, is key to canal operations and also supplies freshwater to Panama City, home to about half the country's population of 4 million.

Vasquez has warned that climate change is a threat to the canal's operations.

Authorities have not yet determined whether drafting restrictions on vessels, which were implemented in 2019 because of low levels at Lake Gatun, will be necessary this year.

The surcharge could lead to a reduction in traffic through the 105-year-old waterway.

Each passage entails the use of millions of gallons of freshwater, much of which is released into the ocean.

Clients pay an average of $188,000 per transit, though some crossing fees rise as high as $1 million, according to authorities.

Vasquez said there will also be changes to the system of client reservations to expedite crossings during dry periods.

"Panama needs greater certainty about the quantity and type of ships that are going to cross," the Canal Authority said in a statement.