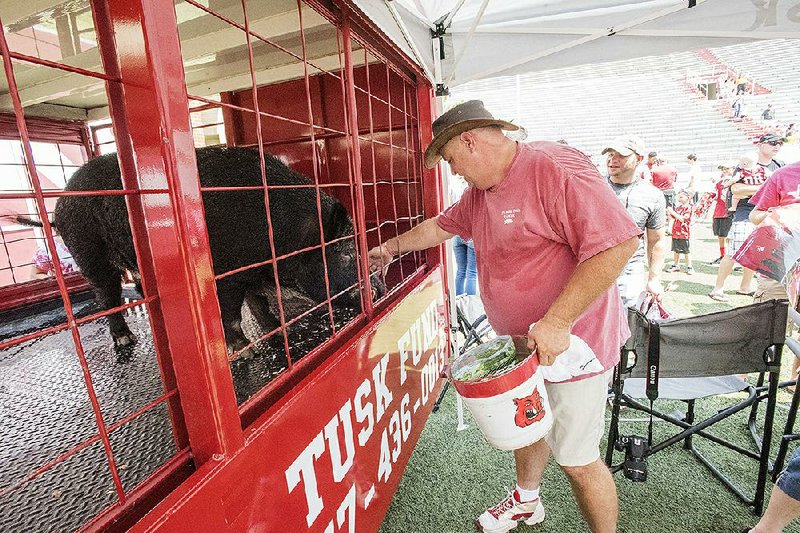 FAYETTEVILLE -- Tusk IV, a Russian boar that was the longest-serving live mascot in the history of the University of Arkansas, died Sunday at the age of 9.

The boar died of natural causes at its habitat in Dardanelle less than six weeks shy of its 10th birthday. Chip Stokes, one of the animal's caretakers, said the life expectancy for the animal is typically 10-12 years.

"The closest thing you can equate them to is a big dog, like a mastiff or a Rottweiler," Stokes said. "Ten [years] is younger, on the lower end, and 15 is on the upper end. Once they hit double digits, they're kind of reaching the maximum [age].

"Their hair turns gray, and it's the typical aging process. They lose a step, and he was very peaceful. He was laying in his spot, and he didn't get up."

Tusk IV was born Feb. 20, 2010, and served as the Razorbacks' live mascot for eight years until its retirement in the spring of 2019. Tusk IV bred its replacement, Tusk V, and another boar that could be used as the mascot in the future.

"Our goal is to never have a sitting Tusk pass," Stokes said. "Tusk II passed when he was sitting, and his brother, Tusk III, took over while Tusk IV was too small."

The UA set up a lineage funding program in 2008, and the animals are raised at the Stokes' family farm in Dardanelle, about 120 miles from Fayetteville.

[Video not showing up above? Click here to watch » https://www.youtube.com/watch?v=EhIL8wLvKs4]

"He is as much a member of our family as anyone's dog or cat," Stokes said. "He's on the family Christmas card. We worked with him hours a day, seven days a week. They have a personality, and each one is different, but you definitely build a bond with them.

"We weaned [Tusk IV] fairly early, and he actually lived the first couple of months of his life in my parents' garage. He really was a house pet up until the point to where he was a little too big."

Tusk IV made its debut as the Razorbacks' mascot in January 2011 when Arkansas played Ohio State in the Sugar Bowl in New Orleans. The boar appeared at dozens of games and events during its 8½ years as the mascot. Kept inside a trailer with small openings, the animal was a popular attraction for fans who took photos and fed it snacks.

The Tusk mascot lineage at Arkansas dates to 1997 when the Razorbacks began having live mascots at football games after a nearly 20-year hiatus.

In the 1960s and 1970s, a number of live mascots were used by the university. In 1977, a mascot named Big Red III escaped an exhibit near Eureka Springs and was shot by a farmer. The next year another live mascot, Ragnar, died in the small southern Arkansas community of Leola after a spree in which it killed a coyote, a domestic pig and seven rattlesnakes, according to university records.

Tusk IV had a leaner diet of grapes, apples, watermelon and corn. In contrast to its 600-pound father, Tusk IV was bred smaller to increase life expectancy and only reached around 350 pounds.

"Hopefully with further breeding, we can try to squeeze a little more time out of them," Stokes said.