They reject idea of case dismissal by Compiled by Democrat-Gazette staff from wire reports | January 14, 2020 at 6:50 a.m. 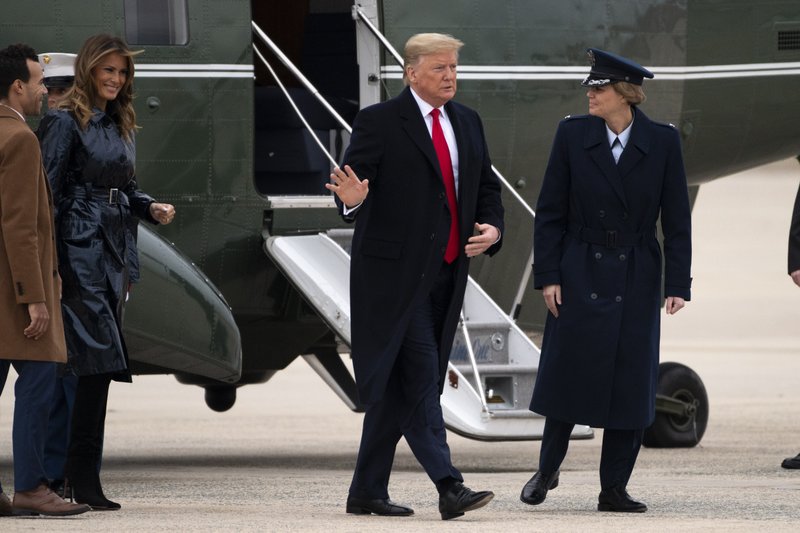 WASHINGTON -- Top Senate Republicans on Monday rejected President Donald Trump's call for outright dismissal of the impeachment charges against him, but they continued to grapple with the shape of the upcoming Senate trial.

The Democratic-run House plans to transmit the articles of impeachment to the Senate in a matter of days. Trump faces two charges approved by the House. Democrats accuse him of abusing his power by pushing Ukraine to investigate political rival Joe Biden and of holding back U.S. military funds to the country as leverage. Trump is also accused of obstructing Congress by blocking witnesses and testimony in the House investigation.

Most Senate Republicans have expressed their eagerness to hold a trial that ends with Trump's acquittal and vindication. But over the weekend, Trump urged the Senate to simply dismiss the charges against him -- without hearing arguments from House prosecutors or his own legal team.

On Monday, senior Republicans said immediate dismissal could not win approval in the chamber, where the party holds a 53-47 majority. And some of Trump's staunch allies argued that the president's legacy would benefit from a robust trial.

"I don't think there's any interest on our side of dismissing," said Sen. Roy Blunt of Missouri, the fourth-ranking GOP senator. "Certainly, there aren't 51 votes for a motion to dismiss."

Senate Majority Leader Mitch McConnell, R-Ky., has said he wants the trial -- the third impeachment of a president in U.S. history -- to follow the format used 21 years ago in the trial of President Bill Clinton. In that case, the Senate approved a resolution that would have allowed it to vote to dismiss the charges.

But Republicans signaled Monday that they are not inclined to include such a provision in the resolution that will kick off Trump's trial, which could start as early as Thursday.

"I think the only reason it would be in there is if there's just some argument for consistency," Blunt said.

Another GOP senator, speaking on the condition of anonymity to discuss legislation that is not yet public, also said the inclusion of a provision to dismiss the case is unlikely.

In a post that Trump tweeted Sunday and retweeted Monday, the president made clear that he was still pressing for the Senate to dismiss the charges.

"Many believe that by the Senate giving credence to a trial based on the no evidence, no crime, read the transcripts, 'no pressure' Impeachment Hoax, rather than an outright dismissal, it gives the partisan Democrat Witch Hunt credibility that it otherwise does not have. I agree!" he wrote.

White House press secretary Stephanie Grisham said during a Fox News interview that Trump is seeking a dismissal "because he did nothing wrong," but if he faces a Senate trial, "he does want it to be fair, which is all he deserves."

Meanwhile, a senior administration official, speaking on the condition of anonymity to candidly discuss strategy, said the White House wants the dismissal option "available to the president" and not necessarily tucked into the organizing resolution. The official also noted that a motion to dismiss could come later in the trial, once the senators have had ample time to hear the opening arguments and ask questions.

Any senator can move to dismiss the charges, as long as it is done in writing.

Trump previously had expressed a willingness to use the results of a Senate trial on the campaign trail as evidence that he has done nothing wrong and that his impeachment by the House was a political "witch hunt" by Democrats.

The House voted Dec. 18 to impeach Trump, but House Speaker Nancy Pelosi, D-Calif., held the two articles of impeachment as she sought concessions from McConnell on witnesses. He refused to budge and Pelosi relented last week, signaling that the House would vote this week to approve a slate of impeachment managers who will deliver the articles to the Senate and prosecute the case against Trump.

Senate Republicans, many of whom say they are prepared to acquit Trump on the two charges, believe a vote on acquittal will provide a more emphatic statement.

For that reason, McConnell has long preferred a vote to acquit Trump, rather than a dismissal vote that has a higher likelihood of failure on the Senate floor -- a view echoed Monday by his closest allies and by rank-and-file senators.

Several Republican senators said Monday that they would reject immediate dismissal of the charges against Trump, including Sens. Lamar Alexander of Tennessee, Mitt Romney of Utah and Susan Collins of Maine.

"My understanding is most Republicans wanted to have a full trial and then have a vote on acquittal or a conviction, which is at a 67-vote threshold," said Sen. John Cornyn, R-Texas.

Talk of dismissing the charges began to ramp up last week after Sen. Josh Hawley, R-Mo., introduced a measure that would alter Senate rules to allow for dismissing articles of impeachment, but only if the House had failed to transmit them to the Senate within 25 calendar days.

McConnell announced last week that he had the votes to proceed with Trump's impeachment trial without support from Democrats and within the parameters that he sought: hours of opening statements for both the House managers and Trump's defense team, as well as a period for questioning from senators. No Republicans signaled dissent from that strategy last week.

The challenge for McConnell will be to balance Trump's desire for vindication with a more measured trial that fits the legal expectations of the Constitution and won't expose Senate Republicans to a spectacle that could hurt them in elections.

"The president and Sen. McConnell have learned to trust each other's judgment." said Josh Holmes, a former top McConnell aide who remains close to the Senate leader. "They've been through an awful lot over three years."

As Senate GOP leaders worked to finalize the resolution to establish Trump's trial, they also began contending with a growing chorus of Republican senators who could be influential swing votes on procedural matters.

Republicans were maneuvering behind the scenes about the vexing issue of witnesses after former national security adviser John Bolton said last week that he would be willing to testify if he receives a Senate subpoena.

Collins, one of the potential swing votes, said last week that she had spoken with a small number of Republican senators to ensure that the process for Trump hews closely to the structure that Clinton was granted during his trial.

On Monday, Collins said her negotiations are not about "specific witnesses" getting called but are merely an attempt to make sure that no senator could short-circuit the trial without first letting all 100 senators vote on whether to call additional witnesses.

"I am working to make sure that we will have a process so that we can take a vote on whether or not we need additional information," which could include witnesses, said Sen. Lisa Murkowski, R-Alaska.

Romney said Monday that he plans to vote against early motions by Democrats for witnesses, but that later in the trial, "I presume I'll be voting in favor of hearing from John Bolton, perhaps among others. That could change depending on what happens in the ensuing days and during those arguments, but I'm not going to be voting for witnesses prior to the opening arguments."

Senate Minority Leader Charles Schumer, D-N.Y., has argued that if Republicans do not support calling witnesses during the Senate trial, then they will be participating in a "cover-up" of Trump's conduct toward Ukraine.

But Sen. Marco Rubio, R-Fla., took to Twitter to push back against accusations that Republican senators are facilitating a cover-up.

"Those claiming Senate GOP going to hold trial without witnesses is lying: We are using same rules used in the Clinton trial," Rubio tweeted.

Senior Republicans stressed Monday that such a vote would likely occur, with Senate Majority Whip John Thune, R-S.D., telling reporters: "I don't think there's any question that there'll probably be that vote at some point in the process."

"I think we should hear the case. We have a constitutional duty to do that," Alexander said. "That means to me, No. 1, hear the arguments. No. 2, to ask our questions. No. 3, to be guaranteed the right to vote on whether we need additional evidence following hearing the case. Evidence could be witnesses; it could be documents."

Trump has yet to decide on his legal team and whether it will grow to include some of his fiercest defenders from the ranks of House Republicans.

Alan Dershowitz, the former Harvard University professor whom the president is considering adding to his defense team, said that Trump has a "good team" with White House counsel Pat Cipollone and personal attorney Jay Sekulow.

Dershowitz said Monday that no final decision had been made by the president.