He calls his threat claim of no matter by Compiled by Democrat-Gazette staff from wire reports | January 14, 2020 at 6:59 a.m. 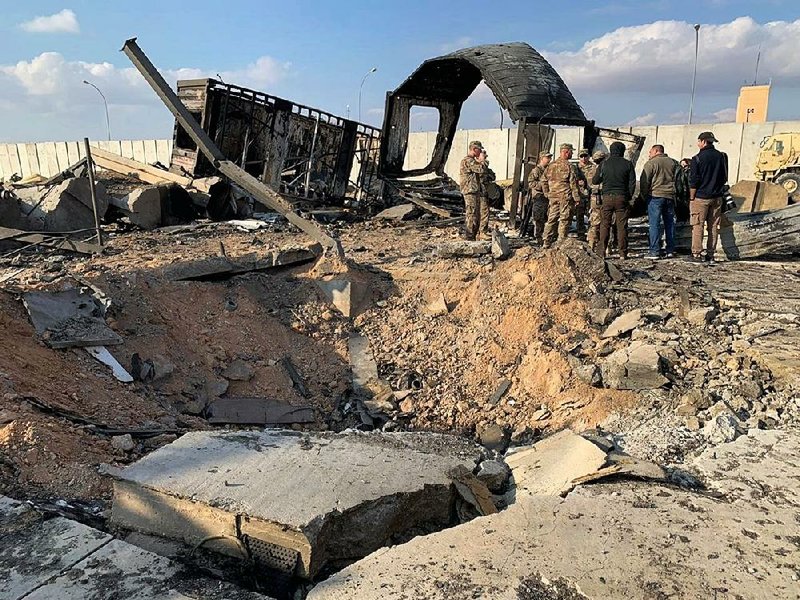 President Donald Trump added to the controversy over his administration's justification for the killing of an Iranian general, saying Monday that "it doesn't really matter" whether it was in response to an imminent threat to the United States.

In a tweet, Trump criticized Democrats for trying to determine whether Iranian attacks the administration has said were planned by Gen. Qassem Soleimani against U.S. targets were imminent.

"It doesn't really matter because of his horrible past," Trump wrote. The administration has held Soleimani, as head of Iran's Quds Force, responsible for orchestrating Iran's use of proxy forces in terrorist attacks throughout the Middle East, and the deaths of hundreds of U.S. soldiers over the years, long before the threat it has said justified the Jan. 3 U.S. drone strike that killed him.

In a separate tweet, Trump emphasized Soleimani's past actions rather than the threat of future attacks. "The Democrats and Fake News are trying to make terrorist Soleimani into a wonderful guy, only because I did what should have been done for 20 years," he wrote.

Trump said last week that Soleimani had been planning attacks on four U.S. embassies. Senior administration officials have declined to confirm that assertion, while saying there was intelligence that Iran was plotting imminent strikes against a series of U.S. targets, including the U.S. Embassy in Baghdad.

[Video not showing up above? Click here to watch » https://www.youtube.com/watch?v=TFEh8fkZEAg]

Many Democratic lawmakers and a number of Republicans have questioned the administration's claims about the immediacy of the threat -- and the targets -- and asserted that it has failed to provide full and accurate information about an action that brought the United States and Iran to the brink of war.

Senate Majority Leader Mitch McConnell, R-Ky., said Monday that he opposes a Senate resolution asserting that Trump must seek approval from Congress before engaging in further military action against Iran.

The "blunt instrument" of a war powers resolution is no substitute for "the studied oversight the Senate can exercise through hearings ... and more tailored legislation," McConnell said.

"We appear to have restored a measure of deterrence in the Middle East," McConnell said in a speech opening the Senate for the week. "So let's not screw it up."

The Democratic-controlled House passed a separate war powers resolution last week. The House measure is not binding on the president and does not require his signature. But House Speaker Nancy Pelosi of California insisted it "has real teeth" because "it is a statement of the Congress of the United States."

McConnell did not offer a timeline for Senate debate, saying only that it would take up the war powers resolution "soon." He mocked Democrats for questioning what "imminent" attacks the administration was preventing by killing Soleimani.

Trump did not consult with congressional leaders ahead of the attack that killed the Iranian general. Afterward, he sent Congress a notification explaining the rationale, but kept it classified. He said Friday that Iranian militants had planned major attacks on four U.S. embassies. Just hours earlier, Secretary of State Mike Pompeo had said the U.S. didn't know when or where attacks might occur.

Pompeo declined an invitation to appear before the House Foreign Affairs Committee to field questions regarding U.S. hostilities with Iran, a decision that has left the panel's chairman "disappointed and frustrated," the lawmaker said Monday.

In a statement, Rep. Eliot Engel, D-N.Y., said that "each passing day raises new questions" about the killing of Soleimani.

"Was there really an imminent threat?" Engel said. "Was it part of a larger operation? What was the legal justification? What is the path forward? With the wildly muddled explanations coming from the administration, the Secretary should welcome the opportunity to make the case and answer questions before the American people."

The announcement of Pompeo's decision comes after senior administration officials appeared Sunday on public affairs shows. The officials declined to confirm Trump's assertion that four U.S. embassies had been targeted for attack by Iran and said that Trump's "interpretation" of the threat was consistent with overall intelligence that justified the killing of a senior Iranian general.

McConnell stepped past the administration's explanations and noted that Democrats are now quibbling with what he called "career professionals" who advised Trump on the issue.

"I look forward to hearing our colleagues who want to quibble over the word 'imminent' explain just how close we should let the terrorists come to killing more Americans before we defend ourselves," McConnell said.

Kaine said late Monday that the bipartisan resolution "clearly states that America can always defend itself," but added: "We don't think that this president -- or any president -- should send our troops into war without a vote of Congress."

While Trump "has promised to keep us out of endless wars in the Middle East, his actions have moved us closer to exactly such a war -- making the American people and American forces less safe," Schumer said Monday.

Two Republican senators, Mike Lee of Utah and and Rand Paul of Kentucky, have signed on as co-sponsors of Kaine's resolution, which also is co-sponsored by Illinois Democratic Sen. Dick Durbin.

Lee said a briefing last week by Pompeo and other officials on the Iran strike was "probably the worst briefing I've seen, at least on a military issue," in the nine years he's served in the Senate.

Paul also criticized the briefing as inadequate and said Congress should not abdicate its "duty under the Constitution to debate when we go to war."

Information for this article was contributed by Karen DeYoung and John Wagner of The Washington Post; and by Matthew Daly and Laurie Kellman of The Associated Press.