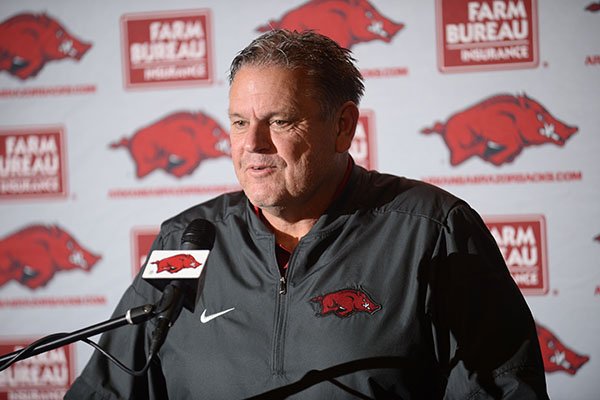 Three-star receiver Savion Williams, 6-4, 215, 4.5 in the 40, of Marshall, Texas, and three-star-plus tight end Allen Horace, 6-4, 250, of Crockett, Texas, committed to the Hogs and former coach Chad Morris, then reopened their recruitment when Morris was fired Nov. 10.

Williams had a good official visit to SMU in December and is also considering TCU. He has an outstanding relationship with receivers coach Justin Stepp. Horace has visits set up to Texas-San Antonio on Jan. 24 and Maryland on Jan. 31.

Georgia offensive line commitment Broderick Jones, 6-6, 280, of Lithonia, Ga., pledged to the Dogs when Pittman was in Athens. He also has visits set for Georgia on Jan. 24 and Auburn on Jan. 31.

ESPN rates him a five-star prospect, No. 1 offensive tackle and the No. 13 overall prospect in the nation. Lemming said landing Jones would be a huge get for Pittman and offensive line coach Brad Davis.

"He's explosive with a long reach," said Lemming, who rates Jones a four-star-plus recruit. "Defenders have a hard time getting around him because he always plays under control. He rarely lunges, and can mirror and slide with the best of them."

In addition to visiting Arkansas, St. John plans to officially visit Florida State on Jan. 31 and is deciding among Auburn, Michigan and Tennessee for a Jan. 24 visit.

Maryland running back Ebony Jackson, 6-1, 210, of Marietta (Ga.) Cherokee is expected to visit the Hogs this weekend. He was committed to Tennessee before pledging to the Terrapins.

Cornerback Rashad Battle, 6-2, 190, 4.55 in the 40, of Fairburn (Ga.) Creekside is expected to visit the Hogs and has Georgia penciled in for Jan. 31. He visited Maryland last spring and committed to the Terrapins in the summer. He reopened his recruitment in November.

"He seems to do everything well and effortlessly," said Lemming, who rates Battle a four-star recruit. "He has good size and has the frame to play cornerback or safety on the next level."

Cornerback Khari Johnson, 6-1, 183, 4.49 in the 40, of Suffield (Conn.) Academy made an unofficial visit to Arkansas in the fall with his father. His mother will join them for an official visit this weekend.

He received a scholarship offer from the Hogs on Dec. 18. He also has offers from Arkansas State University, Akron, Southern Mississippi, Navy and others. He has the Hogs on the top of his list.

Both are rated three-star recruits by Lemming.

Former commitment and athlete Kelvontay Dixon, 6-0, 175, 4.4 in the 40, of Carthage, Texas, is expected to visit this weekend or Jan. 24 before he makes his visit to Texas on Jan. 31. He committed to the Hogs in July and reopened his recruitment after Morris' firing.