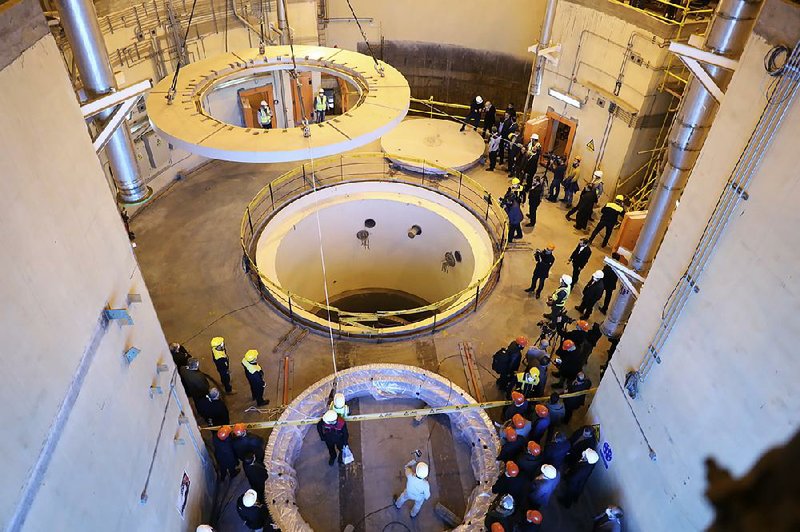 Technicians work at Iran’s Arak heavy water reactor’s secondary circuit during a visit by officials and journalists in December. Britain, France and Germany announced Tuesday that violations by Iran in its landmark nuclear treaty, including exceeding limits on stockpiles of heavy water and enriched uranium, have triggered a dispute mechanism to force discussions and a possible return of U.N. sanctions. (AP/Atomic Energy Organization of Iran)

The European countries started the clock running on what could be about 60 days of negotiations with Iran about returning to full compliance with the nuclear deal. Under the agreement, if they cannot resolve their dispute, that could revive U.N. sanctions on Iran that had been suspended under the deal, including an arms embargo.

The move, which had been expected for more than a week, was delayed when the United States killed a top Iranian commander, Gen. Qassem Soleimani, with repercussions that are still playing out in Iran and across the region.

President Donald Trump withdrew in 2018 from the deal, which was negotiated under former President Barack Obama, and he has imposed several rounds of U.S. sanctions on Iran. In response, Tehran has repeatedly moved beyond the limits that the agreement had placed on its uranium enrichment, raising fears that it could be close to building an atomic bomb.

[Video not showing up above? Click here to watch » https://www.youtube.com/watch?v=XjefUzq1xBg]

Trump said the deal should be renegotiated because it didn't address Iran's ballistic missile program or its involvement in regional conflicts. The reimposed U.S. sanctions have left Iran's economy reeling. To pressure the remaining signatories to provide enough economic incentives to offset the U.S. sanctions, Iran last year began violating its limitations in stages.

Throughout, it has announced the violations publicly and continued to allow inspectors from the International Atomic Energy Agency in to its facilities.

The Europeans want to save the deal and persuade both Washington and Tehran to begin a new set of negotiations about missile development and Iran's regional activities, a senior European official said.

But the three European countries, all signatories to the deal known as the Joint Comprehensive Plan of Action, clearly felt that they had to respond to Iran's movement away from compliance.

In a joint statement, the foreign ministers of Britain, France and Germany said that they had warned Iran on Dec. 6 that "unless it reversed course, we would have no choice but to take action," but Iran "has chosen to further reduce compliance."

On Tuesday, they set in motion the nuclear deal's dispute resolution process, they said, "in good faith, with the overarching objective of preserving the [agreement] and in the sincere hope of finding a way forward through constructive diplomatic dialogue."

The three countries reiterated that they opposed Trump's withdrawal from the deal and were not joining his campaign of "maximum pressure" to cripple Iran economically. "Our hope is to bring Iran back into full compliance," they said.

There was no immediate reaction from Tehran.

The 2015 agreement restricted how many centrifuges Iran could use to enrich uranium -- increasing the percentage of U-235, the rare isotope crucial to its use in nuclear fission -- how highly it could enrich the metal, and how much uranium it could stockpile.

It has taken a series of steps beyond those limits, trying in vain to pressure the Europeans to make good on a commitment to ease the economic pain of U.S. sanctions.

Earlier this month, in response to the Soleimani killing, Iran said it would no longer abide by any restrictions in its uranium enrichment, but without specifying what it would actually do, which was taken by the Europeans as a useful ambiguity.

Trump's harsh sanctions include a prohibition on banking transactions with Iran -- a very difficult prohibition to work around, given the global reach of U.S. banks.

The Europeans have struggled to get a barter system working to circumvent the use of the dollar and U.S. banking systems, adding to Iranian frustration as the U.S. sanctions take a toll on the country.

The Europeans, especially Prime Minister Boris Johnson of Britain, want to give a nod toward Trump while also trying to bring urgency to diplomatic efforts to get new talks underway.

In a BBC interview Tuesday morning, Johnson spoke flatteringly of Trump and said he wanted to avert further military confrontation between Iran and the United States. "Let's dial this thing down," he said.

"President Trump is a great deal-maker, by his own account," Johnson said. "Let's work together to replace the [2015 accord] and get the Trump deal instead," he added, though it was not clear what such a deal would look like.

Speaking to Parliament, British Foreign Secretary Dominic Raab took a harder line than others in Europe. He outlined Iran's step-by-step reduction in its commitments since May, leaving what he described as a "shell" of an agreement.

"Each of these actions were individually serious," he said. "Together, they now raise acute concerns about Iran's nuclear ambitions."

After receiving the letter, EU foreign-policy chief Josep Borrell, who coordinates the agreement on behalf of the world powers, stressed that the pressure on Iran from Europe does not mean international sanctions will automatically be imposed.

Borrell refused to comment on that but again emphasized that the remaining signatories feel it is the best solution to limiting Iran's nuclear ambitions.

"We have to preserve the nuclear deal and work to go back to full and effective implementation," Borrell said in Strasbourg, France. He described the pact as a "significant achievement" and underlined that "there is no alternative to this agreement."

In a separate statement, Foreign Minister Heiko Maas of Germany said, "We could no longer leave unanswered the increasing Iranian violations of the nuclear agreement."

"Our goal is clear: We want to preserve the accord and come to a diplomatic solution within the agreement," Maas said. "We will tackle this together with all partners in the agreement. We call on Iran to participate constructively in the negotiation process that is now beginning."

"Nations must unite behind this effort to hold the Iranian regime accountable for its continued destabilizing actions," the representative said.

But there was some skepticism that the time was right for talks.

Robert Malley, who heads the International Crisis Group and helped negotiate the nuclear deal, said on Tuesday that Trump and his aides would feel now that Iran was weakened by the sanctions and the protests in the streets after the shooting down of a Ukrainian airliner. The Americans would be unlikely to want to give Iran any concessions to start the talks, he said, let alone the lifting of U.S. sanctions that Iran insists must be a precondition.

At the same time, Malley said, senior Iranian officials would not want to be seen talking with Trump administration officials responsible for the killing of Soleimani, a popular figure in Iran who was considered its second most important leader.

Malley said he did not agree with triggering the dispute mechanism now, given the newly complicated setting, but said that doing so "was not fatal" to the deal. "The only way forward now is to use the time to try to get the U.S. and Iran to talk," he added.

Iran had been put under a series of U.N. Security Council sanctions, mostly dating from 2006 and later, after it refused to comply with a Security Council resolution to stop uranium enrichment. Nearly all those sanctions were lifted after the 2015 nuclear deal.

Even if they were reinstated -- something the Europeans do not want to do -- they would not make a significant economic difference to Iran, given the power of the separate U.S. sanctions reimposed by Trump.

One measure that could matter to Tehran if reimposed would restore an essentially blanket arms embargo on Iran. Iran in the past has threatened to quit the Nuclear Nonproliferation Treaty if U.N. sanctions were to be restored.

Last week Trump urged the European signatories to abandon the nuclear deal; as late as Sunday, the three European leaders pledged to salvage the deal and again urged Iran to return to full compliance.

Russia and China, also signatories to the nuclear deal, have supported the efforts to preserve it, including the purchasing of some Iranian oil.

In their joint statement, the three European foreign ministers urged all sides to negotiate and said: "Given recent events, it is all the more important that we do not add a nuclear proliferation crisis to the current escalation threatening the whole region."

On Tuesday, Iran's Foreign Ministry warned of a "serious and strong response" to the European move. But at the same time, ministry spokesman Abbas Mousavi held out an olive branch, saying his country was "fully ready to answer any good will and constructive effort" that preserves the nuclear deal, Iran's official IRNA news agency reported.

Information for this article was contributed by Steven Erlanger of The New York Times; by Lorne Cook, David Rising, Danica Kirka, Frank Jordans, Geir Moulson, Daria Litvinova and Jim Heintz of The Associated Press; and by Loveday Morris, Isabelle Khurshudyan, Kareem Fahim and Quentin Aries of The Washington Post. 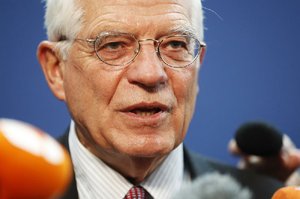