All criticize trade disputes, some decry killing of Iranian by Compiled by Democrat-Gazette staff from wire reports | January 15, 2020 at 6:35 a.m. 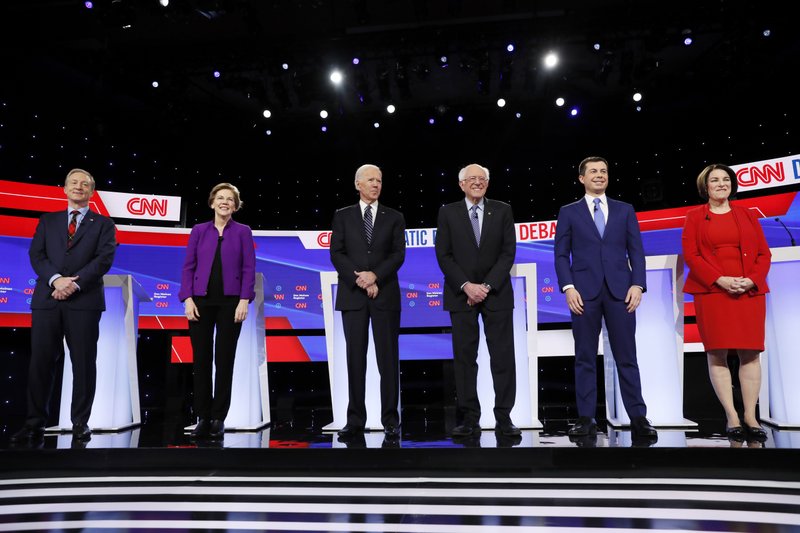 Sen. Bernie Sanders drew an immediate contrast with opponent Joe Biden by noting that Sanders aggressively fought against a 2002 measure to authorize military action against Iraq.

Sanders warned that both the Iraq and Vietnam wars had been based on "lies." "Right now, what I fear very much is that we have a president that is lying again and could drag us into a war that is even worse than the war in Iraq," he said.

Sanders called the Iraq invasion "the worst foreign policy blunder in the modern history of this country."

"I did everything I could to prevent that war," Sanders said. "Joe saw it differently."

[Video not showing up above? Click here to watch » youtube.com/watch?v=OsDXtdGXn_A]

Biden acknowledged that his 2002 vote to authorize military action was "a mistake," but highlighted his role in the administration of former President Barack Obama helping to draw down the U.S. military presence in the region.

Former South Bend, Ind., Mayor Pete Buttigieg and California businessman Tom Steyer tried to argue that their outside-the-Beltway resumes would be benefits in the Oval Office. "What we are hearing is 20 years of mistakes by the American government in the Middle East," Steyer said. "It's time for someone from the outside having a strategic view on what we're trying to do."

Buttigieg, a 37-year-old who served as a military intelligence officer in Afghanistan, cast foreign policy as part of his generational argument. "There are enlisted people I serve with barely old enough to remember some of those votes," he said after Biden and Sanders talked about their 17-year-old Iraq war votes.

Sanders and Massachusetts Sen. Elizabeth Warren, argued that the United States needed to pull its troops entirely from the Middle East and Afghanistan. "The American people are sick and tired of endless wars that have cost us trillions of dollars," Sanders said.

Warren said generals keep arguing that the United States is "turning the corner" in its fights. "We've turned the corner so many times we're going in circles in these regions," she quipped.

The two voices backing traditional foreign policy were Biden and Minnesota's U.S. Sen. Amy Klobuchar, who both argued for at least a small military presence remaining in the Middle East.

Just six candidates gathered in Des Moines, all eager to seize a dose of final-days momentum on national television before Iowa's Feb. 3 caucuses. A "he-said, she-said" dispute over gender involving two longtime allies, Sanders and Warren, loomed over the event, though it was not a focus in the debate's earliest moments.

Specifically, Warren claimed publicly on the eve of the debate that Sanders told her during a private 2018 meeting that he didn't think a woman could defeat President Donald Trump. In an immediate uproar on the left, there were signs that both candidates wanted to deescalate the situation.

Sanders vehemently denied that he had said such a thing, calling the claim "ludicrous" and suggesting political foul play in the final weeks before the Iowa caucuses.

"Look at the men on this stage. Collectively they have lost 10 elections," Warren exclaimed, noting that she and Klobuchar had won every election they ever ran in.

Sanders said it was "incomprehensible" to believe he would suggest a woman couldn't become the president.

"Of course a woman can win," he said. "I don't know that that's the major issue of the day."

New polls in Iowa show Democratic voters are roughly split among four top candidates, the long-standing nonaggression pact between Warren and Sanders is in tatters, and half of the contenders onstage were about to leave the campaign trail in the crucial days before the caucuses to serve as jurors at Trump's impeachment trial.

With the senators likely to be in the Capitol up to six days a week for the impeachment trial of Trump, they will be unable to make their final appeals to Iowa voters in person as frequently as will Biden and Buttigieg.

Trump campaigned in neighboring Wisconsin just as Democrats took the debate stage and spoke about Warren and Sanders' disagreement.

"She said that Bernie stated strongly that a woman can't win. I don't believe that Bernie said that, I really don't. It's not the kind of thing Bernie would say," Trump said.

The Democrats were unified in their opposition to Trump's presidency and particularly his foreign policy. Several candidates condemned Trump's recent move to kill Iran's top general and his decision to keep U.S. troops in the region.

"We have to get combat troops out," declared Warren, who also called for reducing the military budget.

Others, including Buttigieg, Biden and Klobuchar, said they favored maintaining a small military presence in the Middle East.

"I bring a different perspective," said Buttigeg. "We can continue to remain engaged without having an endless commitment to ground troops."

All the Democrats agreed that Trump's trade war with China and North American allies has hurt American jobs and the rural economy -- especially in Iowa, among the nation's leading export economies.

Sanders' back and forth with his colleagues revealed a rift between his economic isolationism and the rest of the field's half-a-loaf approach.

Sanders said the deal will result in the "continuation of the loss of hundreds of thousands of good-paying jobs" and stops short of addressing environmental concerns vital to his campaign.

Biden suggested there was nearly no trade pact Sanders would support.

Warren, despite opposing U.S. trade agreements with Asia and Europe, said "we have farmers here in Iowa who are hurting, and they are hurting because of Donald Trump's initiated trade wars."

For his part, Steyer has largely been a background presence in previous face-offs, but Tuesday night he stood out by occupying an unusual niche -- the anti-corporate billionaire.

Later, he said his children didn't deserve government-paid-for college, effectively siding with Buttigieg's more centrist approach on free college. But then he argued that he had been talking about a wealth tax before Warren, who's made it her keystone proposal. "The redistribution of wealth to the richest Americans from everybody else has to end," he said.

Asked by CNN's Wolf Blitzer if his funding of a pro-impeachment push since late 2017 was a smart move, given that Trump is likely to be acquitted in the coming Senate trial, Steyer said: "Standing up for what's right is always worth it, Wolf. And I will never back down from that."

Information for this article was contributed by Alexandra Jaffe, Steve Peoples, Darlene Superville and Bill Barrow of The Associated Press; and by Shane Goldmacher and Jonathan Martin of The New York Times. 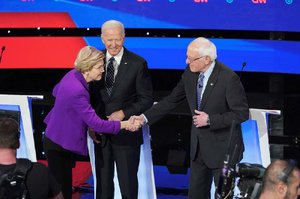 Sen. Elizabeth Warren shakes hands with Sen. Bernie Sanders as former Vice President Joe Biden stands by Tuesday night during their debate in Des Moines, Iowa. Their reported dispute over whether a woman could win the presidency hung over the event. (The New York Times/Tamir Kalifa)