8 flu deaths reported in Arkansas in week; child's passing is first of season 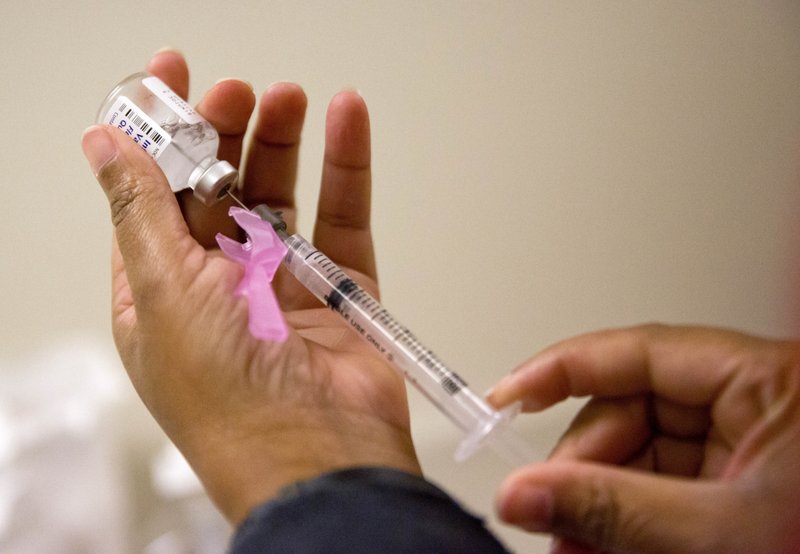 FILE - In this Feb. 7, 2018 file photo, a nurse prepares a flu shot at the Salvation Army in Atlanta. (AP Photo/David Goldman)

Eight more flu deaths in Arkansas were reported in the past week, including the first death of a child from the illness during the current season, the state Department of Health said Tuesday.

The latest deaths raised the toll from the current flu season to 23.

The child, whose death was reported Monday, was between age 5 and 18.

Jennifer Dillaha, the Health Department's medical director for immunizations and outbreak response, said she couldn't release any further information about the child.

But she said that nationally, children have been dying from the flu this season at about twice the rate that they did during the previous one. That's partly because of the unusual prevalence this season of influenza B, which tends to hit children harder than adults.

"We've been pretty fortunate this year not to see any other pediatric deaths," Dillaha said.

The flu season generally runs from October through May. At about this point in the previous season, the state had recorded 14 deaths.

The number of flu deaths was 120 by the end of the season last spring.

A Health Department report showed a drop in the percentage of patients in doctors offices and hospital emergency rooms who had flu-like symptoms during the week that ended Saturday, compared with the previous week.

But Dillaha said those numbers could be revised as more reports from health care providers arrive.

"It would be nice if this was a real decline at this point, but I don't think that the data are solid enough to say that it is," she said.

Anyone who hasn't gotten the flu shot this season should get one, she said.

Children 8 or younger who have never had two doses of the vaccine during a previous season need to have two shots spaced four weeks apart, she said.

"It's going to be some weeks before the flu goes away," she said. "It may be a few months even."

Vaccinations are available at pharmacies, doctors offices and the Health Department's county units.

The Health Department offers shots at no cost to the patient, although it will charge the patient's insurance plan if the patient has health insurance.

The U.S. Centers for Disease Control and Prevention reported last week that the level of flu across the country remained elevated but that the number of hospitalizations and deaths was relatively low because of the predominance of influenza B.

It said the elderly account for the majority of flu-related hospitalizations and deaths and are less likely than children and young adults to be affected by influenza B.