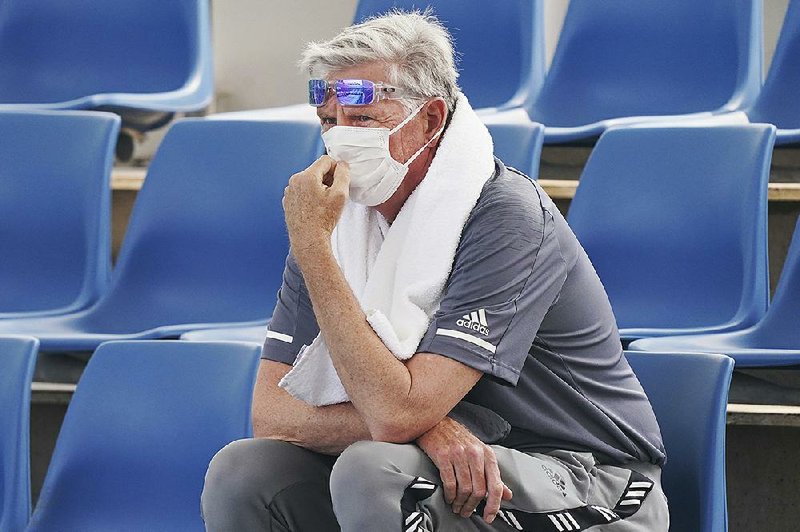 Hazardous air enveloping Melbourne, Australia, delayed play on the first day of Australian Open qualifying matches Tuesday and again today, causing one player to double over in coughing fits during a match as the country's wildfires marred the famed tournament.

Citing "hazardous" air conditions caused by smoke from nearby wildfires blowing toward the city, the city of Melbourne advised residents Tuesday morning to "stay indoors, keep windows and doors shut, and stay inside."

The city also closed the North Melbourne Recreation Centre and the Melbourne City Baths in the interest of safety. But after an hourlong delay, the would-be Australian Open qualifiers played on, even though the air quality index remained in an unhealthy range, with temperatures in the low 90s adding to difficult conditions.

Dalila Jakupovic, a Slovene player ranked 180th, was winning her match against Stefanie Vogele in the midafternoon when she sank to her knees in a fit of coughing. Struggling to breathe, she was forced to abandon the match as she was leading, 6-4, 5-6.

Jakupovic, who has not previously had breathing issues, said she had been having difficulties "like an asthma attack" while warming up for her match.

"I think it was not fair because it's not healthy for us," Jakupovic told reporters. "I was surprised. I thought we would not be playing today, but we really don't have much choice."

Eugenie Bouchard, the 2014 Wimbledon runner-up, complained to medical staff that she also experienced chest pains, feeling "spikes in her lungs." Her opponent, You Xiaodi, also struggled with the conditions, and hit only underarm serves for much of the third set of Bouchard's victory.

"I think there just has to be some kind of line in the sand, some kind of rule where you measure the air and if it's over a certain number or however you measure it, then you just don't play," Bouchard told reporters.

Strict guidelines are in place at the Open for stopping play or closing stadium roofs when heat becomes too intense. But no tournament policy has yet been made public regarding air quality.

Craig Tiley, the Australian Open tournament director, said Tuesday that extensive testing and consultation were taking place on site, and that the tournament would continue to suspend play if it was deemed necessary.

"The health and well-being of not only the players but the fans and our staff is of utmost importance," Tiley said.

Main-draw play at the Australian Open is scheduled to begin Monday. Tournament officials have indicated that if the bushfire smoke continues to be an issue, they have the capacity to stage the event by closing the roofs on their three main stadiums and filtering the air.

Those three show courts have a combined seating capacity of nearly 33,000, and the tournament also has eight indoor courts available. Those are normally used for practice during the Open but could be used for matches, even though they lack spectator seating.

But if the poor air quality persists, it is uncertain for now whether moving the tournament indoors would assure safe playing conditions.

Many players expressed anger that matches were played in such conditions and at the lack of clarity or communication from the tournament.

"Shocked to see that qualifying matches have started @AustralianOpen," tweeted player Mandy Minella from Luxembourg. "What about the health of all the people that have to work out there, especially the ball kids?"

Fifth-ranked Elina Svitolina tweeted: "Why do we need to wait for something bad to happen to do an action?"