U.S., EU and Japan team to push for tougher restrictions by Compiled by Democrat-Gazette staff from wire reports | January 15, 2020 at 2:13 a.m. 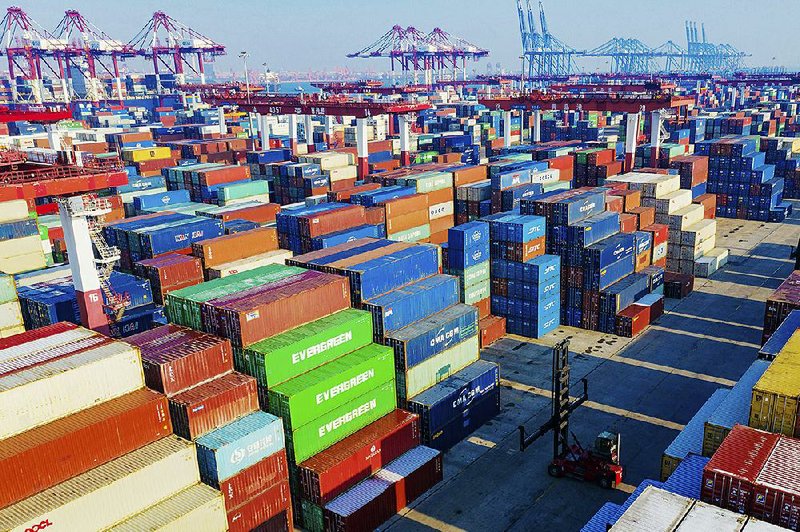 Hundreds of containers sit stacked Tuesday at the port in Qingdao, China. Despite today’s scheduled signing of an initial U.S.-China trade deal, tariffs on billions of dollars of imported Chinese goods will likely stay in place until after the presidential election, according to sources. (AP)

China has come under greater international pressure to reduce industrial subsidies after the U.S., Europe and Japan agreed to push for stronger World Trade Organization rules against market-distorting government aid.

The top trade officials of the U.S., the European Union and Japan struck a deal on Tuesday in Washington to expand the kinds of subsidies prohibited by the organization. The announcement came on the eve of a planned signing ceremony at the White House for phase one of a U.S.-China trade deal, which doesn't address Beijing's support for domestic companies that compete internationally.

The subsidies accord -- a breakthrough after years of deliberations -- targets Chinese practices that have been a source of growing tensions between China and the rest of the world including the U.S., the EU and Japan.

This "is an important step toward addressing some of the fundamental issues distorting global trade," EU Trade Commissioner Phil Hogan said in a statement. The accord "is also a symbol of a constructive strategic collaboration between three major players."

The joint initiative may signal a path for de-escalating international commercial tensions triggered by U.S. President Donald Trump's trade war against China, curbs on imports from the EU and assault on the World Trade Organization system.

The Trump administration is gearing up for negotiations with China on a second-phase trade accord after the initial deal scheduled to be signed today. Meanwhile, the EU is scrambling to bolster the multilateral trade order underpinned by the trade organization by seeking to address U.S. concerns.

Under the agreement among the U.S., the EU and Japan, the list of subsidies unconditionally outlawed by the trade organization in Geneva would be broadened to cover:

• Aid to ailing businesses that have no credible restructuring plan.

• Support for companies unable to obtain long-term financing or investment from independent commercial sources operating in industries in overcapacity.

• Some direct forgiveness of debt.

In addition, the deal would make it harder for countries to justify a range of other types of subsidies by reversing the burden of proof. The subsidizing nation would have to show that the aid in question has no serious negative trade effects.

If ultimately enacted, the agreement could represent the most significant upgrade of the global trade rule book in more than a decade.

Currently, about 64% of global exports must compete with subsidized rivals, according to researchers at the Global Trade Alert, which tracks global subsidies. In 2017, that trade would have been worth $11.3 trillion.

Ultimately, the U.S., EU and Japan want to win support for their deal among a group of like-minded trade organization members so it can become a wider agreement. That would allow members to sidestep a requirement by the organization that all accords must be made by a consensus among its 164 members.

A key question is how to win over China.

Since 2001, China's steel production capacity has grown by more than 500% and now accounts for more than half of global output of the metal, the U.S. said during a 2019 trade organization meeting in Geneva. In the aluminum sector, four of the world's top five recipients of government support are Chinese companies, according to a 2019 report by the Organization for Economic Cooperation and Development.

Trump administration officials have pledged to tackle the issue in phase two of their trade talks with Beijing.

Separate from the first phase of the trade deal, existing tariffs on billions of dollars of Chinese goods coming into the U.S. are likely to stay in place until after the American presidential election, and any move to reduce them will hinge on Beijing's compliance with the terms of the initial trade accord, people familiar with the matter said.

The two sides have an understanding that no sooner than 10 months after the signing of the agreement at the White House today, the U.S. will review progress and potentially consider additional cuts on tariffs affecting $360 billion of imports from China, the people said, declining to be identified because the matter is private.

The period of review, which isn't expected to be specified in the deal's text, is intended to give the Trump administration time to verify the Asian nation's adherence to the terms of the pact. It won't affect a halving of the 15% tariff on about $120 billion in Chinese goods announced in December that is still due to go ahead.

Officials have said before they will release the text of the 86-page agreement in conjunction with the signing and denied that there's a plan to cut duties further.

Most analysts say any meaningful resolution of the key U.S. trade allegation -- that Beijing uses predatory tactics in its drive to supplant America's technological supremacy -- could require years of contentious talks. And skeptics say a satisfactory resolution may be next to impossible given China's ambitions to become the global leader in such advanced technologies as driverless cars and artificial intelligence.

"The signing of the phase-one deal would represent a welcome, even if modest, de-escalation of trade hostilities between China and the U.S.," said Eswar Prasad, a Cornell University economist. "But it hardly addresses in any substantive way the fundamental sources of trade and economic tensions between the two sides, which will continue to fester."

In a letter to Trump on Monday, the top Senate Democrat, Charles Schumer of New York, complained that the phase-one deal appeared to make "very little progress in reforming China's rapacious trade behaviors and seems like it could send a signal to Chinese negotiators that the U.S. can be steamrolled."