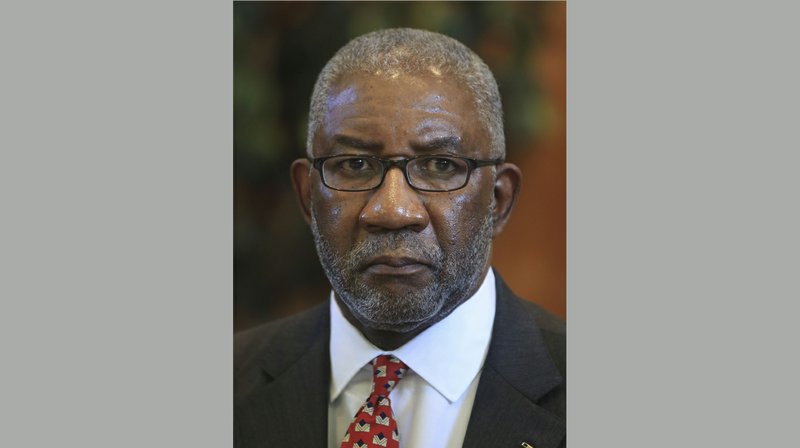 A dictionary-bearing Pulaski County circuit judge on Tuesday not only rejected a plea to dismiss a temporary restraining order barring the state Racing Commission from issuing a license for a casino in Pope County, he extended the order by 30 days.

The ruling by Circuit Judge Wendell Griffen came after the Racing Commission -- in an effort to remove roadblocks to issuing the license -- on Friday voted unanimously to "abandon" a second casino license application window that ran for 90 days from Aug. 19 to Nov. 18. The first window was in May and drew five applicants rejected by the commission.

Friday's commission action was backed up by a statement released Monday from Chairman Alex Lieblong reiterating that the commission decided to "abandon" the second window.

Holding a pale yellow paperback dictionary high in the air with his right hand, Griffen admonished the state Racing Commission that "words matter."

"'Abandon' does not mean 'nullify,'" Griffen said, pausing after each word for emphasis.

Senior Assistant Attorney General KaTina Guest, who represents the commission, had argued at the beginning of Tuesday's court hearing that Friday's decision makes a lawsuit against the commission "moot."

The suit was filed Dec. 27 by Citizens for a Better Pope County, after the anti-casino group voluntarily withdrew a previous lawsuit asking that no casino license be issued until the question is brought before county voters.

The group's latest case seeks a permanent injunction to bar the Racing Commission from issuing a casino license based on any applications submitted during the second window.

On Jan. 3, Griffen granted a temporary restraining order, saying the commission violated its own rules when it opened the second window. The order prompted the Racing Commission to cancel a Jan. 6 meeting to decide whether to grant the license to Cherokee Nation Businesses of Oklahoma.

"It's not moot," Griffen said emphatically from the bench Tuesday.

The circuit judge said that much like a vehicle abandoned on the side of the road, something abandoned "can be picked up again."

"I find the reasons for the [restraining order] still apply," Griffen said.

The 30-day hiatus will allow time for more "discovery" in the case, Jerry Malone, attorney for Citizens for a Better Pope County, told Griffen.

"There's just so much out there we don't know," Malone said. "They're over there behind the curtain like the Wizard of Oz saying, 'Trust us.' That's why we need discovery."

Also, Griffen said, the Racing Commission has not filed answers to either an amended petition or an amended motion for a preliminary injunction. The delay will give commission attorneys time to do so, he added.

In an interview after the hearing, Malone said he was happy with Griffen's ruling.

"It was readily apparent, that Judge Griffen had conducted a thorough review, prior to the hearing, of all the pleadings, including our amended petition and motion, along with the motions filed by Cherokee Nation, such that Judge Griffen had a full understanding and appreciation of the issues before him," Malone said. "He gave the attorneys for each of parties the time that we needed to raise the issues that we thought merited his consideration on behalf of our respective clients and he asked really good questions of each attorney. In short, that is what each litigants expect and deserve -- a full and fair opportunity to be heard and a decision made on the merits."

The second application window was opened after the Racing Commission rejected all five applicants -- Cherokee Nation Businesses, Gulfside Casino Partnership of Mississippi, Kehl Management of Iowa, Warner Gaming of Nevada and Choctaw Nation Division of Commerce of Oklahoma -- which submitted applications during the first window that ran May 1-30.

None of the applications contained endorsements by current local officials, and the commission rejected them.

Approved by voters in November 2018, constitutional Amendment 100 allows a new casino in both Pope and Jefferson counties, and allows the expansion of gambling at racetracks in Hot Springs and West Memphis. Construction is taking place at all sites except Pope County.

The amendment requires the new casinos to have endorsements of local officials.

While Amendment 100 does not state when the endorsements have to be dated or submitted, the Racing Commission last year added a rule that the endorsements can come only from officials in office at the time the application is submitted. The Legislature also passed Act 371, which became effective in March, that requires the same thing.

One applicant, Gulfside Casino Partnership, filed suit against the Racing Commission in August saying its application from May met the constitutional requirements because, unlike the others, it included letters of endorsement from local officials, although they were issued right before the officials left office in December 2018.

That case is scheduled for a March 30 hearing before Pulaski County Circuit Judge Tim Fox.

The Racing Commission opened the second window after the Pope County Quorum Court on Aug. 13 issued a surprise endorsement for Cherokee Nation Businesses.

Two applications were received during the second window: one from Choctaw Nation, which did not include the required endorsements, and one from Cherokee Nation Businesses that included endorsements from Ben Cross, county judge of Pope County, and Roger Lee, mayor of Dover.

During Tuesday's hearing, Guest of the attorney general's office told Griffen that even if the judge did not believe "abandon" was the right word, the second sentence in Lieblong's statement solidifies the commission's position.

"The Commission also decided not to consider any of those applications that were submitted during that August 2019 to November 2019 second license application process and to refund any fees that were included with the applications," Lieblong said in the statement.

Malone said the Racing Commission violated its rules by refunding the $250,000 application fee instead of only half of it, as is clearly cited in the commission's casino gaming rules.

"They are just doing whatever they want to," Malone said.

The Racing Commission opened the second window under its Rule 2.13.4(d), which states a second window will be opened only if "no application is received by the Commission."

Cherokee Nation attorney Scott Richardson, in two letters -- one on Aug. 15 and the other on Jan. 6 -- urged the Racing Commission to accept the Cherokees' casino license application under Rule 2.13.4(b) instead of under subsection (d).

After Friday's meeting, Byron Freeland, the commission's attorney, told the Arkansas Democrat-Gazette that the commission will accept applications from any entity that "can show 'good cause' shown under our rules."

But Griffen said Tuesday that the casino gambling rules do not define "good cause shown." However, he also noted that the issue was not being contested in the current litigation.

The temporary restraining order does not bar the Racing Commission from acting on "good cause shown," Griffen told the parties.

Chuck Garrett, chief executive officer for Cherokee Nation Businesses, said in a statement Tuesday that the group was "pleased that Judge Griffen made it abundantly clear today that his [restraining order] does not in any way prevent us from submitting our application and demonstrating good cause as to why it should be accepted by the Arkansas State Racing Commission."

"As the only qualified applicant for Pope County having received the required support of County officials pursuant to Amendment 100, we look forward to submitting our application in the very near future and ultimately being granted the license by the Racing Commission," Garrett said.

Cross said in an email that he respects Griffen's ruling "as being based in fact, and in accordance with the interpretation of the Racing Commission's rules as promulgated."

"In recognition of the recent decision by the Racing Commission to abandon the second application period altogether, I anticipate it will ultimately mute the issues before Judge Griffen and allow the commission the latitude to reopen the first application period."

Scott Hardin, a spokesman for the state Department of Finance and Administration, which oversees the commission, said the Racing Commission will meet Jan. 25.

"This will be the first opportunity for the commission to discuss and consider recent developments in litigation," Hardin said.