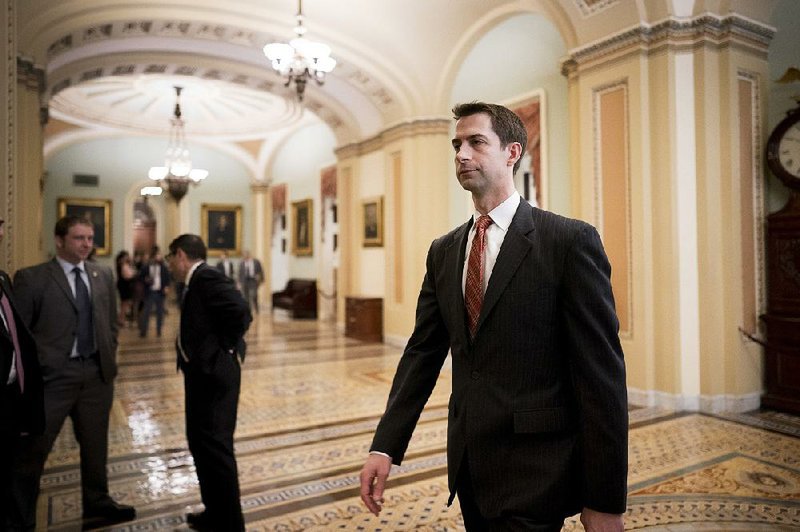 A Pine Bluff man lost his right to vote and gained a felony conviction Tuesday, when he was sentenced to a year's probation for a misguided effort in 2018 to get the attention of U.S. Sen. Tom Cotton, R-Ark.

Henry Edward Goodloe, 78, admitted in August that a year earlier he mailed an envelope containing a small amount of white powder, wrapped in plastic, to Cotton's Washington office, along with a note that said, "Senator Cotton, I been emailing you about reparations to black peoples for slavery. You ignored me. Maybe this will get your attention."

The letter, which contained Goodloe's home address on a return-address label, never actually made it to Cotton's office because it was intercepted at the city's mail sorting facility. A hazardous-materials response team later determined that the substance was unbleached flour and starch.

Still, agents from the FBI's Joint Terrorism Task Force soon appeared on Goodloe's doorstep. His attorney, Nicole Lybrand of the federal public defender's office, said he "immediately admitted" that he had sent the letter "and expressed that he did this as an act of frustration for receiving no response from his elected official about his request to discuss reparations."

In court papers, Lybrand added, "after discussing it all with the FBI agents, Mr. Goodloe agreed that it was not a good idea and that his thinking at the time that he mailed it was different than his thinking now."

She also sought to put her client's frustration in context.

She said he grew up in a small town in south Arkansas and was just 6 years old when he first chopped cotton. She said that was his primary job for 16 years, and that he "recalls just how hard the manual labor was on his body, mindset, and on those around him. He also recalls the day that the farmers cut their wages in half, immediately after (and in response to) the passage of the civil rights act."

Goodloe stopped chopping cotton in 1962, when he was promoted to being a tractor driver, Lybrand said. She said he eventually moved to Stuttgart and worked in the rice fields for several years, until he was able to get an assembly line job at a General Motors factory out of state, where he worked for over 25 years. He retired in 1993 and returned to Arkansas.

"Despite meeting the qualifications for multiple types of benefits, Mr. Goodloe is proud to have never once sought or received any type of government assistance," Lybrand said. "He has always been a self-sustaining, productive, contributing member of society. He has never before been in trouble with the law."

In 2009, Lybrand said, Goodloe began communicating by email with U.S. Sen. Stephen Cohen, D-Tenn., about his strong beliefs that black people are due reparations for slavery and subsequent economic difficulties.

"Senator Cohen was responsive to his emails and even met with him in person," Lybrand said. "He told Mr. Goodloe that he understood his concerns but did not anticipate reparations would come to fruition during his lifetime. He later mailed Mr. Goodloe an autographed picture of him with President Obama, which Mr. Goodloe framed and placed next to a picture of Martin Luther King Jr."

Lybrand said that years later, Goodloe became frustrated when he didn't get a similar response from Cotton, and, on Aug. 11, 2018, "made an irrational decision and mailed him an envelope containing flour."

Cotton's spokesman James Arnold said Tuesday that "in general, we respond to everyone who contacts the office unless they've established a pattern of aggressive or abusive behavior." He added that "our office regularly receives more than 1,000 individual emails and letters per week."

Across the country, postal officials take very seriously letters containing white powder and suggesting that the substance is anthrax, a deadly toxin. That grew dramatically after letters containing actual anthrax spores were sent to news organizations and U.S. senators in 2001, killing five people.

On Nov. 7, 2018, a federal grand jury in Little Rock indicted Goodloe on two felony charges: intentionally conveying false information regarding biological weapons and mailing threatening communications. In exchange for his guilty plea in August to the first charge, federal prosecutors dropped the second one.

Under federal statutes, Goodloe faced up to five years in prison, but Lybrand argued for probation, saying the crime was aberrant behavior for an otherwise law-abiding citizen and was committed without significant planning. She also cited Goodloe's age, which she said makes him unlikely to commit another crime. Assistant U.S. Attorney Stacy Williams didn't object, leaving the sentence to the court's discretion.

In granting Lybrand's motion to allow Goodloe to receive probation in lieu of prison time, U.S. District Judge Kristine Baker admonished him to have "no communication or other interaction with Sen. Tom Cotton, without permission from the [U.S.] Probation Office."

She told Goodloe that while "it's reasonable to expect a response from your elected officials," his method of complaining "is a crime."