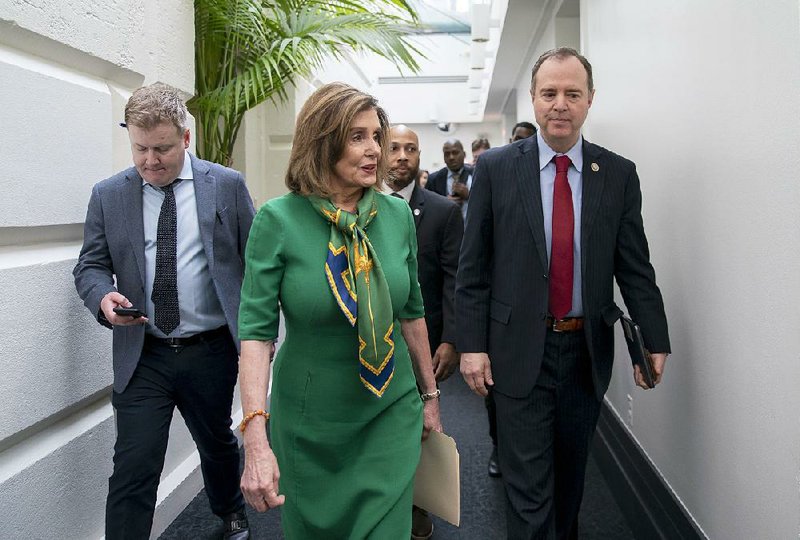 WASHINGTON -- Speaker Nancy Pelosi announced that the House will vote today on a resolution appointing impeachment managers and transmitting the articles of impeachment to the Senate, allowing the trial of President Donald Trump to begin this week.

The announcement came not long after Pelosi detailed her plan to Democratic lawmakers in a private gathering Tuesday morning. Before the vote, Pelosi said, she will appoint the team of lawmakers who will serve as prosecutors, or managers, in the case against Trump. She did not say whom she would choose.

The team of House managers is likely to be led by Rep. Adam Schiff of California, the chairman of the Intelligence Committee who helmed the House's Ukraine inquiry, sources have said. But the speaker was keeping her selections extremely close.

During the meeting Tuesday, Schiff laid out his expectations for trial procedures, telling members that House managers would likely have 24 hours to present their case against Trump, spread over four six-hour days. The president's lawyers would be given the same amount of time.

[Video not showing up above? Click here to watch » https://www.youtube.com/watch?v=eeh2X7bM_GY]

As the vote nears, Democratic leaders in the House have been working behind the scenes with Republican leaders in the Senate and with Chief Justice John Roberts, who will preside over the trial, to settle questions of timing for the highly choreographed ritual of turning over the charges to the Senate.

Rep. Steny Hoyer of Maryland, the No. 2 House Democrat, told reporters that though the House vote will take place in the afternoon, the procession across the Capitol could be postponed until Thursday to avoid interfering with a ceremony previously scheduled for today in the Capitol rotunda.

After the articles are delivered, the chief justice will travel across the street, from the Supreme Court to the Senate chamber, to administer an oath to senators to do "impartial justice."

Senate Republican leaders have indicated that the trial is unlikely to begin in earnest until next week, to allow both the prosecution and the defense time to prepare their arguments.

Senate Majority Leader Mitch McConnell, R-Ky., later told reporters that he expects to engage in the initial phase of the trial this week. The substantive trial action could begin on Tuesday, he said.

It will be only the third presidential impeachment trial in American history, a serious moment that comes with the backdrop of a politically divided nation and an election year.

The crux of the Democrats' case is the allegation that Trump tried to leverage a White House meeting and military aid, sought by Ukraine to combat Russian military aggression, to pressure Ukrainian President Volodymyr Zelenskiy to open an investigation of former Vice President Joe Biden and his son Hunter Biden, as well as a probe of an unsupported theory that Kyiv conspired with Democrats to interfere in the 2016 presidential election.

Late Tuesday, House investigators announced that they were turning over a "trove" of new records of phone calls, text messages and other information from Lev Parnas, an indicted former associate of Trump lawyer Rudy Giuliani. Schiff said the information shows Trump's effort "to coerce Ukraine into helping the President's reelection campaign." He said this and other new testimony must be included in the Senate trial.

The House impeached Trump on two charges on Dec. 18: abuse of power and obstruction of Congress. Pelosi, D-Calif., had held the charges as she sought assurances that the Senate would call witnesses, but she decided late last week to allow a vote to transmit them without an agreement.

In a statement, she said the House had "upheld its Constitutional duty to defend democracy For The People."

"The President and the Senators will be held accountable," she said.

Pelosi criticized McConnell for becoming a co-sponsor of a resolution to dismiss the charges, which she said is the equivalent of "a cover-up."

"The American people will fully understand the Senate's move to begin the trial without witnesses and documents as a pure political cover-up," she said. "Leader McConnell and the President are afraid of more facts coming to light. The American people deserve the truth, and the Constitution demands a trial."

McConnell has said that he wants the trial to follow the format used 21 years ago in the trial of President Bill Clinton.

Under those rules, House impeachment managers and lawyers for Trump would first give opening statements and then senators would have an opportunity to present written questions to both sides. Only at that point would the Senate decide whether to call witnesses.

McConnell blasted House Democrats on Tuesday for presenting a "half-baked" impeachment resolution and for pressing the Senate to call witnesses that were not part of House proceedings.

"Two things cannot be both true," McConnell said during remarks on the Senate floor. "House Democrats' case cannot simultaneously be so robust that it was enough to impeach in the first place but also so weak that the Senate needs to go fishing."

Among the highly sought impeachment witnesses by Democrats is former national security adviser John Bolton, who earlier this month said he would be willing to testify if he receives a Senate subpoena.

White House spokesman Hogan Gidley said Tuesday that the White House is "happy for anyone to come forward and testify" during the Senate trial but added that the president's lawyers would probably invoke executive privilege to limit testimony.

McConnell said all 53 GOP senators are on board with his plan to start the session and consider the issue of witnesses later.

Trump in recent days has advocated for the "outright dismissal" of his case, a move that leading Republicans rejected Monday, signaling they want to hear arguments from House prosecutors and Trump's legal team.

McConnell agreed that he does not have the votes for a dismissal.

"There is little or no sentiment in the Republican conference for a motion to dismiss," McConnell said. "Our members feel we have an obligation to listen to the arguments."

In fact, a growing number of senators say they want to ensure the ground rules include the possibility of calling new witnesses.

Sen. Susan Collins of Maine is leading an effort among some Republicans, including Mitt Romney of Utah and Lisa Murkowski of Alaska, for votes on witnesses.

"My position is that there should be a vote on whether or not witnesses should be called," Collins said.

Romney said he wants to hear from Bolton, who others have said raised alarms about the alternative foreign policy toward Ukraine being run by Giuliani.

Democrats have been pushing Republicans, who have a slim Senate majority, to consider new testimony, arguing that fresh information has emerged during Pelosi's monthlong delay in transmitting the charges.

"We want the truth," Senate Minority Leader Charles Schumer said Tuesday as the chamber opened. He said that in other presidential impeachment trials, the Senate called witnesses. "Do Senate Republicans want to break the lengthy historical precedent?" he asked.

Republicans control the chamber with a 53-47 majority. It takes 51 votes during the impeachment trial to approve rules or call witnesses. It would take only four GOP senators to form a majority with Democrats and insist on new testimony. It also would take only 51 senators to vote to dismiss the charges against Trump.

At a private GOP lunch, Sen. Rand Paul of Kentucky warned that if witnesses are allowed, then defense witnesses also can be called. He and other Republicans want to subpoena the Bidens.

Hunter Biden formerly served on the board of Burisma, the Ukrainian energy company that's at the heart of the impeachment investigation, while his father was vice president.

"I look forward to forcing votes to call Hunter Biden and many more," Paul, an ally of the president, tweeted late Monday.

Gidley said the White House is prepared for whatever unfolds.

"Whether this thing goes to a full trial, whether it's modified or whether it's just dismissed out of hand for the sham, illegitimate scam it has become, we will be ready," he said.

House Democratic Caucus Chairman Hakeem Jeffries said Democrats are hopeful they can persuade enough GOP senators to vote for calling witnesses in the Senate trial, naming four he specifically has in mind.

Jeffries said he believes the Democrats already have the support of Collins, Murkowski and Romney on witnesses, which puts them one vote short of the simple majority needed to make decisions about the trial, including whether to call witnesses.

He then named Sens. Martha McSally of Arizona, Joni Ernst of Iowa, Cory Gardner of Colorado and Lamar Alexander of Tennessee as the ones he believes could get Democrats to the 51-vote threshold.

"There are any number of individuals for who we hope decency will prevail," Jeffries said.

Information for this article was contributed by John Wagner, Colby Itkowitz, Felicia Sonmez and Shayna Jacobs of The Washington Post; by Lisa Mascaro, Alan Fram, Mary Clare Jalonick, Laurie Kellman, Matthew Daly, Andrew Taylor and Padmananda Rama of The Associated Press; and by Nicholas Fandos of The New York Times. 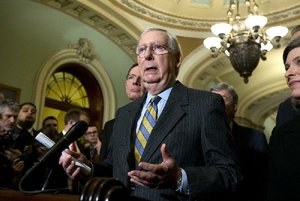 Senate Majority Leader Mitch McConnell blasted House Democrats on Tuesday for presenting a “half-baked” impeachment resolution and for pressing the Senate to call witnesses that were not part of House proceedings. (AP/Jose Luis Magana) 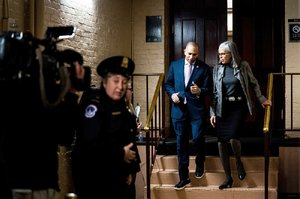 House Democratic Caucus Chairman Hakeem Jeffries of New York and Rep. Katherine Clark of Massachusetts leave a private session for House Democrats on Tuesday. Jeffries said “there are any number” of GOP senators who possibly could vote for calling witnesses in the Senate impeachment trial. (The New York Times/Erin Schaff)