Rains in forecast for ablaze Australia 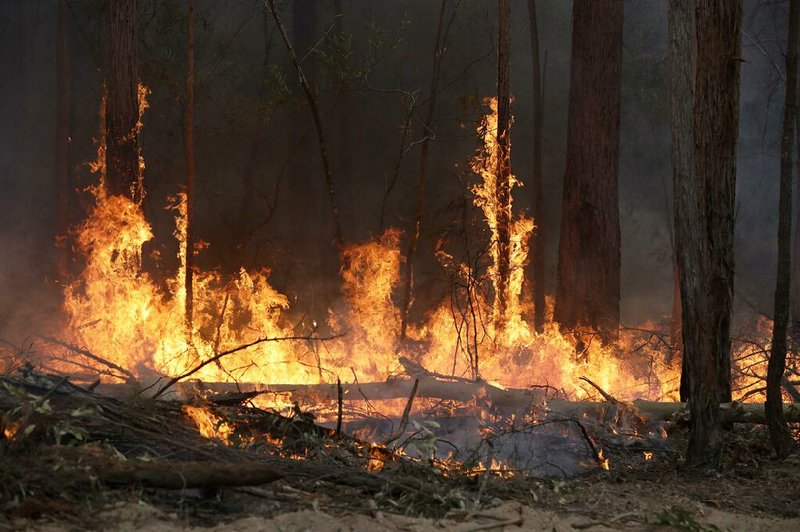 Flames from a controlled fire burn up tree trunks as firefighters work at building a containment line at a wildfire near Bodalla, Australia, Sunday, Jan. 12, 2020. Authorities are using relatively benign conditions forecast in southeast Australia for a week or more to consolidate containment lines around scores of fires that are likely to burn for weeks without heavy rainfall. (AP Photo/Rick Rycroft)

A weather pattern shift is arriving in some of the bush fire zones of Australia, where a relentless, multiyear drought and record-shattering heat turned the landscape into a tinderbox that ignited this spring and summer.

Rains are not expected to extinguish all of the flames, nor will they end the drought, but they will be a relief for the thousands of firefighters seeking to contain the blazes, which still number more than 100 in New South Wales alone.

The rainfall also will unleash new hazards, since the newly burned regions will be prone to flooding and landslides that could further damage forest ecosystems. This could be worsened by the slow-moving nature of some of the heaviest showers and thunderstorms, according to Sarah Scully, a meteorologist at Australia's Meteorology Bureau.

The rainfall will be variable, given the episodic nature of the showers and thunderstorms, fueled by a frontal zone setting up across eastern Australia that will draw in moist, humid air from the ocean to the southeast. The bureau is predicting 1.2-3 inches of rain during the next several days across a large area, stretching from Victoria northward into New South Wales and Queensland.

However, some areas could get considerably more rain than that, leading to weather whiplash.

Some regions could get lighter rains, including southern Victoria and South Australia, where the bush fire danger remains high.

Computer models show the heaviest rain falling during thunderstorms close to the coast, which could keep the highest totals away from areas where large fires are burning. However, some relief appears likely across a large area. The rains will be heaviest today in Victoria and New South Wales, and will then spread farther northward through late week, Scully said in an online video.

"Hopefully some of this heavy rainfall will fall over the fire sites and help control or even extinguish some of those fires. But it's a bit of a double-edged sword, as heavy rainfall and gusty winds bring the potential for flash flooding, particularly in the burnt-out areas of New South Wales and Victoria," Scully said.

She added that these areas are vulnerable to "landslips" and trees falling because of sudden downpours. According to the Sydney Morning Herald, officials are working to protect Sydney's water supply against any mud or ash flows that could overwhelm reservoirs and other water systems.

The rainfall will not be enough to end the drought, bring an end to the fire season or even extinguish more than a few of the blazes, given the size of many of the fires. One "megafire," for example, has measured at least 1.5 million acres alone.

The scale and scope of the bush fires is staggering. In New South Wales, the fires have destroyed more than 2,000 homes. Smoke from the fires, lofted to the stratosphere by towering fire-induced thunderstorms, is now circumnavigating the globe, and the firestorms have wiped out unique natural ecosystems, including species already on the brink of extinction, that may be irreplaceable.

Also, a weather pattern more conducive to bush fires could reemerge in coming weeks, considering that historically Australia has had some of its worst fires in January and February. However, some of the large-scale patterns that favored hot and dry conditions in Australia this spring and summer, such as an atmosphere-ocean cycle known as the Indian Ocean Dipole, have returned to a more neutral position.

Other factors at work, including climate change, are still raising the odds of a hotter and drier rest of the Australian summer.