Retired pope asks to have name taken off book on celibacy 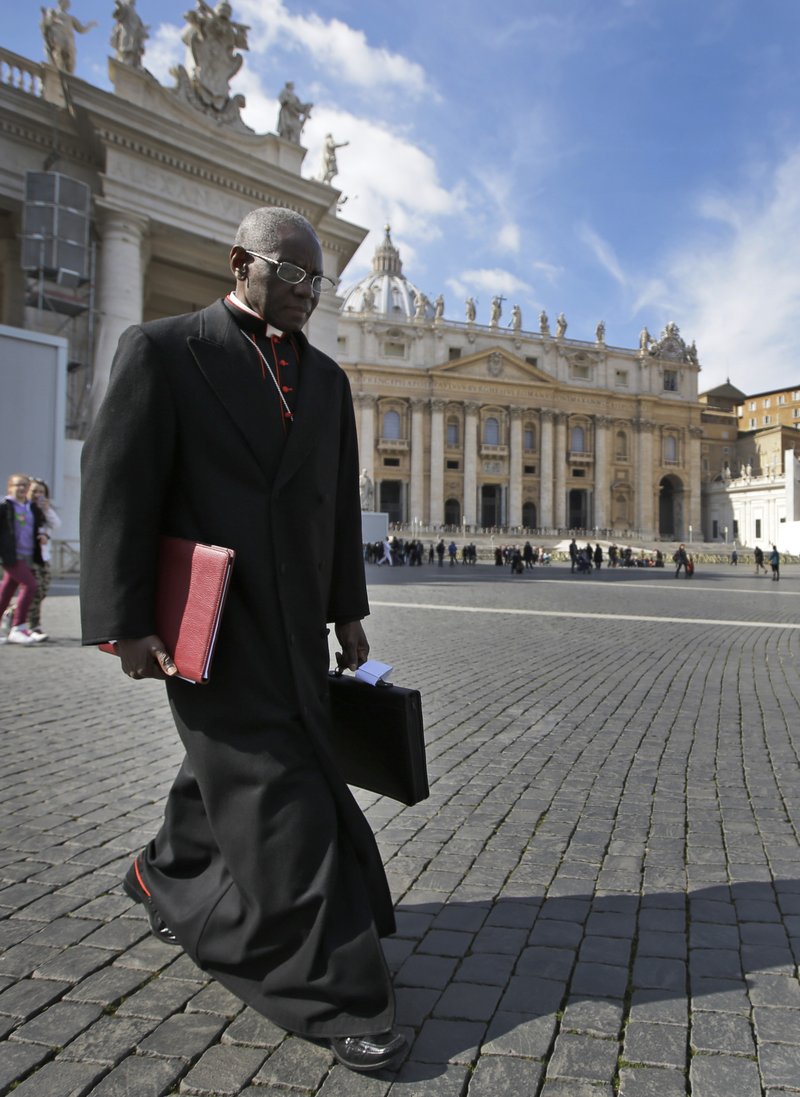 In this Monday, March 4, 2013 file photo, Cardinal Robert Sarah, of Guinea, walks in St. Peter's Square after attending a cardinals' meeting, at the Vatican. Retired Pope Benedict XVI wrote the book, "From the Depths of Our Hearts: Priesthood, Celibacy and the Crisis of the Catholic Church," along with his fellow conservative, Guinean Cardinal Robert Sarah, who heads the Vatican's liturgy office and has been a quiet critic of Francis. (AP Photo/Andrew Medichini, File)

VATICAN CITY -- Emeritus Pope Benedict XVI distanced himself Tuesday from a book on priestly celibacy and asked to be removed as its co-author after the project gave the impression the retired pope was trying to interfere with the reigning one.

Benedict's longtime secretary, Archbishop Georg Gaenswein, said in a statement there had been a "misunderstanding" with the co-author and that Benedict never intended to have his name on the book From the Depths of Our Hearts.

However, the book's English publisher, Ignatius Press, refused to back down, saying that it would publish the book as scheduled as a co-written text, essentially defying the stated will of the aging former pontiff.

Advance excerpts of the book, which was to be published in France today and in the United States next month, had set Catholic social media abuzz, fueling conservative-progressive battle lines that deepened after Benedict's 2013 retirement paved the way for Francis' papacy.

The book includes a chapter apiece by Benedict and Cardinal Robert Sarah, as well as an introduction and a conclusion said to be written jointly by the two. In the essay he wrote, Benedict reaffirmed the "necessity" of celibacy for the Catholic priesthood.

While that position is not new, From the Depths of Our Hearts has Benedict chiming in on a fraught issue while Francis weighs whether to allow married men to be ordained priests in the Amazon to cope with a priest shortage there.

Benedict knew Sarah was planning a book about the priesthood and celibacy and contributed an essay, but "he never approved a co-authored book and never saw or authorized the cover" giving him lead author status, Gaenswein said.

"I can confirm that this morning, on the indication of the emeritus pope, I asked Cardinal Robert Sarah to contact the publishers of the book, asking them to take the name Benedict XVI off as co-author and to take his signature from the introduction and conclusion," Gaenswein said in a statement on Vatican News.

"It was a misunderstanding, without putting into doubt the good faith of Cardinal Sarah," Gaenswein added.

Benedict's association with the book was surprising since he had vowed to live "hidden from the world" when he stepped down as pope, specifically to avoid any suggestion that he still wielded papal authority.

The controversy made clear once again that the unprecedented reality of a retired and reigning pope living side by side in the Vatican gardens still has some wrinkles that need to be worked out.

Some commentators have called for new rules for future retired popes -- first among them not allowing them to be called "emeritus pope" or wear the papal white cassock as Benedict has done -- to remove all real and symbolic associations with the papacy.

Earlier Tuesday, as the scandal grew, Sarah reproduced letters from Benedict making clear the 92-year-old ex-pope had written the text and approved of publishing it as a book. He spoke out after news reports quoted "sources close to Benedict" as alleging that Sarah had manipulated the pope into publishing the book.

"These defamations are of exceptional gravity," Sarah, who heads the Vatican's liturgy office, tweeted at one point.

While insisting on the transparency of his interactions with Benedict, Sarah agreed to make the editorial changes for future publications.

"Considering the polemics provoked by the publication of the book 'From the Depths of Our Hearts,' it has been decided that the author of the book in future publications will be: Cardinal Sarah, with the contribution of Benedict XVI," he tweeted. "However, the complete text will remain absolutely unchanged."

But Ignatius Press is refusing to make any changes in authorship. In a statement, the U.S. publisher said it had worked from the text provided by French publisher Fayard, which listed two authors contributing a chapter each and a jointly written introduction and conclusion.

After the first reports, Francis' supporters quickly alleged Benedict had been manipulated by members of his right-wing entourage into writing something that amounted to an attack on Francis. Some claimed it was evidence of elder abuse, given Benedict's age and increasing frailty.

Print Headline: Retired pope asks to have name taken off book on celibacy