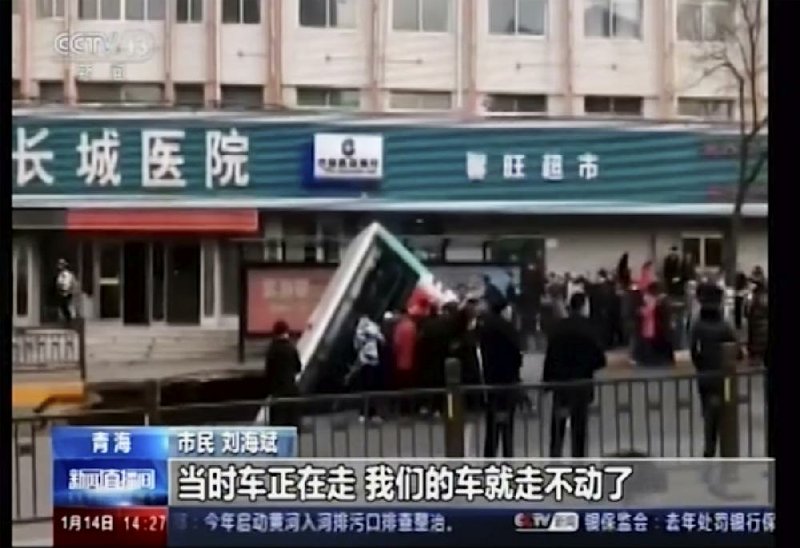 In this video image, a bus rests partly in a sinkhole Monday in the center of a downtown street in Xining, China. (AP)

BEIJING -- A bus plunged into a sinkhole on a city street in northwestern China, killing at least six people and leaving four missing, authorities said.

Some 1,000 emergency workers and 30 vehicles were sent to the site, the emergency management bureau in the city of Xining said. A crane was called in to lift the bus above the sinkhole so rescue workers could look for victims.

Video apparently shot by security cameras just after the accident showed the bus gradually settling into the hole while people nearby scrambled for safety.

Other video showed the bus tipped more than halfway into the chasm that had opened up at a bus stop just outside a health clinic. Light and smoke were rising to the surface, possibly as a result of the rupture of gas or electricity lines. Workers using backhoes, dump trucks and other equipment excavated earth around the collapse.

The collapse Monday afternoon left 16 people in the hospital. The emergency management bureau said the bus had been raised from the collapsed 860-square-foot section into which it had fallen.

The hilly city of Xining is the capital of Qinghai province, one of China's poorest regions, sitting atop the Tibetan Plateau.

BEIJING -- Shanghai ended all official relations with the city of Prague on Tuesday after the Czech capital chose to partner with Taipei instead of Beijing.

The foreign affairs office of the Shanghai municipal government snapped that they "strongly condemn [Prague's decision] and solemnly protest!"

Shanghai will immediately suspend relations and all official contact with Prague, the municipal government said in a notice.

The move comes a day after Prague signed a cooperation agreement with the capital of Taiwan, which China regards as a renegade province. Last year, Prague refused to sign a deal with Beijing that included a clause stating that the city supports the one-China principle -- the notion that Taiwan belongs to Communist Party-ruled China.

The Czech government recognizes the one-China principle, but Prague authorities have resisted it.

HAVANA -- The Cuban government is warning citizens to prepare for shortages of cooking gas resulting from U.S. sanctions on the island.

State media outlets announced Tuesday morning that cylinders of liquid petroleum gas would be scarce for Cubans who buy state-subsidized gas at about 30 cents per cylinder as well as for customers who buy gas at market prices more than 10 times higher.

Many homes in Cuba depend on bottled gas because they are not connected to municipal gas lines. Electric stoves and hot plates are relatively rare and expensive to use because of high electricity prices.

"I'll have to adapt, use an electric cooking pot and hope that things get better," said Angela Leon, a 60-year-old housewife. "It's a great injustice because it's already hard to put food on the table. I hope the U.S. government is aware that what they're doing to us is unjustified."

The government said in an announcement on state media platforms that a Trump administration sanction announced in November against Cuban state energy company Corporacion Panamericana had forced the cancellation of planned purchases of liquid petroleum gas.

The Trump administration has been regularly tightening the trade embargo on Cuba with the stated aim of pressuring the country to give up its close relationship with Venezuelan President Nicolas Maduro, whom the U.S. wants out of office.

The U.S. last week banned charter flights from the U.S. to cities outside Havana, the latest pressure meant to cut off the flow of hard currency and energy to Cuba.

MADRID -- An explosion at a petrochemical plant in northeastern Spain burned four people Tuesday, and the regional emergency services agency warned people nearby not to go outside.

A tweet by emergency services for the Catalonia region called the blast in the port city of Tarragona a "chemical accident."

The services said four people were reported as having been injured and were being treated for major burns.

The service advised residents in parts of the city of 800,000 and in nearby towns to close windows and to refrain from going outside as preventive measures.

The blast took place at the premises of Iqoxe, according to a woman who answered the phone at the company and who quickly hung up without giving her name.

According to the company's website, Iqoxe is Spain's sole producer of ethylene oxide, a chemical compound used in detergents, solvents and other products, as well as glycol, one of the main raw materials in the production of plastics.

Tarragona is 71 miles southwest of Barcelona, the regional capital of Spain's Catalonia region. 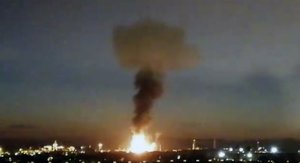 This video image shows the fire Tuesday after an explosion in an industrial zone for chemicals in Tarragona, Spain. (AP/Laura_presicce)