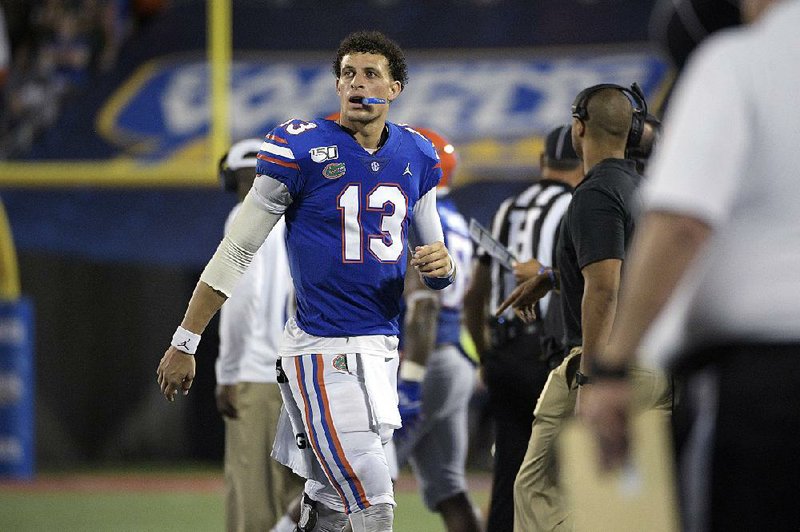 Florida quarterback Feleipe Franks (13) watches from the sideline during the second half of an NCAA college football game against Miami Saturday, Aug. 24, 2019, in Orlando, Fla. (AP Photo/Phelan M. Ebenhack)

Former Florida quarterback and graduate transfer Feleipe Franks is expected to visit the University of Arkansas this weekend.

He announced his plans to leave the Gators on Dec. 1. Mississippi State is another school that appears to be in the running.

Franks, 6-6, 238 pounds, was an ESPN four-star prospect, the No. 5 pocket passer and No. 65 overall recruit in the 2016 class out of Wakulla County High School in Crawfordville, Fla.

He was Florida's starting quarterback this season, but suffered a dislocated ankle that included a fracture in the third game against Kentucky and missed the remainder of the season.

He started all 13 games as a sophomore and threw for 2,457 yards, 24 touchdowns and 6 interceptions while rushing for 350 rushing yards on 110 carries and a team-high-tying 7 rushing touchdowns in leading the Gators to a 10-3 record.

Friday is the last day students can register for the second semester at Arkansas. Franks will be immediately eligible in 2020.

Houston quarterback D'Eriq King could be another signal caller that looks at Arkansas. He announced Monday night he was entering the NCAA transfer portal.

"I've entered the portal I think it's best for me and my family!" King said on Twitter.

Razorback offensive coordinator Kendal Briles recruited King while at Baylor and coached him in 2018 to his best season as a Cougar. King completed 219 of 345 passes for 2,982 yards, 36 touchdowns and 6 interceptions in 2018.

Because he graduated from Houston on Dec. 14, he will be eligible to play next season.