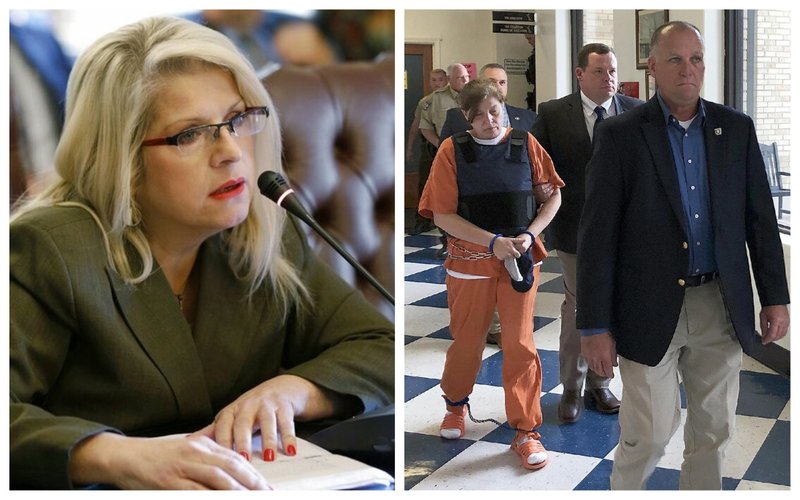 At left, then-Sen. Linda Collins is shown in a 2015 file photo. At right, Rebecca O’Donnell is escorted from the Randolph County Courthouse in July after her arraignment on charges. (Arkansas Democrat Gazette/John Moritz)

The number of charges against a woman accused of killing former state Sen. Linda Collins grew Tuesday after several women who were held at the Jackson County jail reportedly told police that Rebecca O'Donnell attempted to recruit them into murder-for-hire plots to help secure her release.

According to a charging document filed Tuesday, Collins' ex-husband and his wife were to be targets of O'Donnell, as were a judge and a prosecutor formerly assigned to the murder case.

The alleged jailhouse plot now widens the scope of the criminal investigation that began when Collins, a Republican lawmaker who had left office in early 2019, was found dead outside her home in Pocahontas in June.

O'Donnell, a close friend of Collins, was arrested less than two weeks later and charged with capital murder in Randolph County, where Collins lived. O'Donnell has pleaded innocent to the slaying and other related charges, for which she could possibly face a death sentence.

Because Randolph County lacked jail space to hold women until recently, O'Donnell was moved to the Jackson County jail in Newport after her arrest last year. It was there on Tuesday that she was charged with two counts each of solicitation to commit capital murder and tampering with physical evidence.

O'Donnell's attorney, Lee Short of Little Rock, on Tuesday said the "outlandish" allegations included in an affidavit were likely the result of inmates attempting to get favorable plea deals by agreeing to testify about made-up claims.

According to the probable-cause affidavit filed with the court on Tuesday, O'Donnell's cellmate at the jail, Shana Hembrey, told Arkansas State Police officials that O'Donnell had sought her help in arranging to kill Philip Smith -- Collins' ex-husband, identified as "Phil Smith" in the affidavit -- and to have his death "look like a suicide" by either shooting or hanging Smith. Hembrey told police that she also was asked to kill Smith's new wife, Mary, and to have it look like Mary Smith was preparing to leave her husband, the affidavit said.

Hembrey also told police that O'Donnell wanted Hembrey to "blow up" O'Donnell's Honda Civic at a police impound lot to "destroy evidence that may be in the vehicle," according to the police affidavit.

The affidavit said Hembrey led police to two other women at the jail who she said were recruited by O'Donnell. According to the affidavit, police eventually spoke to four women, including Hembrey, who all described a similar plot.

Authorities said each told investigators that they were asked by O'Donnell to kill Phil Smith and they were offered compensation in the form of gold and silver worth tens of thousands of dollars that O'Donnell told them Phil Smith kept in his home.

One woman, Rebecca Landrum, told police that O'Donnell accused Smith of having "set her up," and that a suicide note should be left with his body so that the "charges would be dropped off her."

Two of the women also told police that they were asked to help kill Henry Boyce, a prosecutor once assigned to O'Donnell's murder case.

A judge in Randolph County, Harold Erwin, also was the target of one of O'Donnell's plots, according to the affidavit.

Asked whether the alleged plot was a reason for his departure, Boyce declined to comment, citing a gag order covering the case.

Erwin was among judges in the 3rd Circuit who recused from hearing the case. Phil Smith is a retired judge who once worked in the circuit.

The death of Collins, a stalwart defender of concealed-carry gun rights and other conservative issues, attracted national news crews to her hometown of Pocahontas last summer. Even before the charges against O'Donnell were announced, a gag order was put in place by a different judge, leading to the proliferation of online rumors regarding suspects and motives.

Eventually, after urging by the Arkansas Democrat-Gazette and other media outlets, Circuit Judge David Goodson, who was presiding over the case at the time, allowed the release of an affidavit in late July stating that O'Donnell had been filmed inside Collins' home removing security cameras on the last day that Collins was seen alive in late May. On June 4, her body was found wrapped in a tarp in her home's driveway. She had been stabbed to death.

Neither police nor prosecutors have unveiled a purported motive for the crime.

O'Donnell's fiance, Tim Loggains, was also a close friend of Collins. He has steadfastly denied that O'Donnell had anything to do with her death and also criticized the police investigation. In an appearance on Good Morning America last year, he said, "Becky's not capable of this. I haven't questioned that."

The latest affidavit alleges that Loggains' daughter attempted to help bail out one of the women who later told police that she had been recruited by O'Donnell to kill Phil Smith. That woman, Cassandra Geoffrion, told police that she gave her cellphone to Emily Loggains during a meeting at the jail in November, so that Emily Loggains could go through Geoffrion's contacts to find someone to help bail her out of jail. The affidavit states that jail logs show Loggains visiting the Jackson County jail on the date of the alleged meeting.

Tim Loggains issued a statement through a spokeswoman Tuesday saying that the allegations "defy believability." Emily Loggains could not be reached for comment.

"My family's faith in Becky is unwavering," Loggains' statement read. "We cannot imagine the evidence will actually substantiate these allegations."

According to the affidavit, Geoffrion told police that she never actually considered helping to kill Smith, but was worried that "a more gullible" inmate might.

Another woman at the jail, Melissa Duede, told police that she refused O'Donnell's request to enlist Duede's boyfriend in the plot to kill Phil Smith and Boyce, the prosecutor.

Duede said she overheard O'Donnell asking another woman at the jail if she knew any "Mexican people" who could carry out the murders, and that the other woman said she "could see about it."

Christopher Scott Nance, a Newport-based public defender who represents Hembrey, Geoffrion and Duede, said Tuesday that he had not yet spoken to his clients about the document, and he declined to comment. The attorney for Landrum could not be reached for comment.

Dittrich, the prosecutor now assigned to the Collins murder, said he did not expect any charges to be filed against the women who spoke to the police about the alleged plots. He said he didn't know if any of the women had been given plea deals on other charges for agreeing to speak to the police.

Before the latest charges, O'Donnell was moved from the Jackson County jail to the jail in Randolph County, according to Short, her attorney. Her bail on the new charges has been set at $1 million.

Randolph County completed an addition to its jail around the end of 2019 that allows the county to hold women.

Goodson stepped down from the case in the fall and was replaced by now-retired Circuit Judge John Fogleman of Marion. Fogleman is the fourth judge to preside over the case. 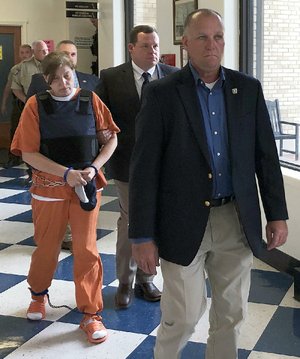 Rebecca O’Donnell is escorted from the Randolph County Courthouse in July after her arraignment on charges in the death of former state Sen. Linda Collins. On Tuesday, O’Donnell, who pleaded innocent in the slaying, was charged with two counts of solicitation to commit capital murder and tampering with physical evidence. (Arkansas Democrat Gazette/John Moritz)