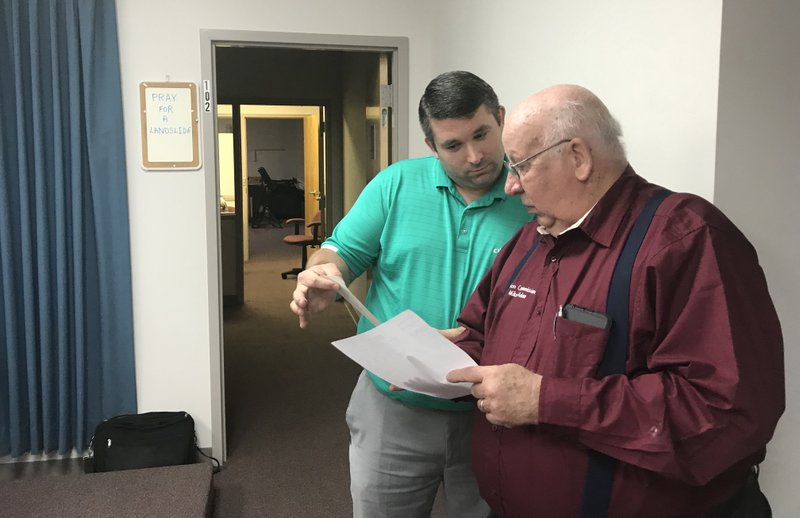 PINE BLUFF -- Voters in the White Hall School District approved a 2.9-mill increase in property taxes by a nearly 2-to-1 margin Tuesday in a special election.

Complete but unofficial results, according to the Jefferson County Election Commission, were:

White Hall School Superintendent Doug Dorris, who spent the past several weeks trying to get information out to people regarding the increase and to drum up support for it, was visibly moved by the result.

"I'm shocked right now because it's coming so well," he said. "A lot of work has gone into this. We personally went to 49 different organizations and met with them and talked to them about the proposal."

Dorris said students, parents and a small army of volunteers pitched in to get out the vote. He said there was a bit of opposition to the measure.

"There was some opposition, but I didn't run into much out there," he said. "It just seemed like there was no real organized effort against it."

Although there were only six polling sites involved, voting machine glitches delayed getting the results to the Election Commission office where they could be tabulated, a factor which election officials said was because of the age of the machines. Although the polls closed at 7:30 p.m., the votes did not arrive at the Election Commission office until nearly 8:30 p.m., and the final votes were not counted until after 9:30 p.m.

"We've had machines malfunction and freeze up at every polling site this time," said Election Commission Chairman Michael Adam. "That's never happened before, but that's because of the age of these machines. They should have been replaced years ago."

In spite of a heavy mist that fell much of the day, voters turned out in larger-than-expected numbers for the special election, according to election officials. Poll supervisors at several voting sites reported brisk traffic with people arriving at a steady pace, although that wasn't the case for all sites.

White Hall Mayor Noel Foster said the turnout seemed to be larger than in past special elections.

"I've been at most of the polling sites today, and to me there's been more of a turnout this year," he said.

Foster said an intensive public information campaign led by Dorris may have driven much of the turnout.

Foster was referring to a millage increase that went to voters in the district in 2017 and failed to pass.

"We were under different leadership then, and this time they've been out there selling it and explaining to people what it's for," he said.

Larry Dice, poll supervisor at First Baptist Church in White Hall said at 5:30 p.m., two hours before the polls closed, that his site had seen fairly heavy traffic most of the day.

"I don't know for sure where we are right now, but at our last count we had over 330 people who had voted," he said.

Poll workers at Central Baptist Church in Pine Bluff said turnout there was low, with only 96 people voting by 6:30 p.m.

Dorris said the additional 2.9 mills will raise about $25 million over 30 years and will go toward retirement of a proposed 30-year bond issue of $47.55 million, which will be used to pay off existing debt and for construction of:

• A new auditorium, multipurpose building and gymnasium entrance at the high school.

• A new safe room at each of the four elementary school campuses.

• Air-conditioning replacement at the middle school.

Funds will also go for constructing, refurbishing, remodeling and equipping other school facilities.