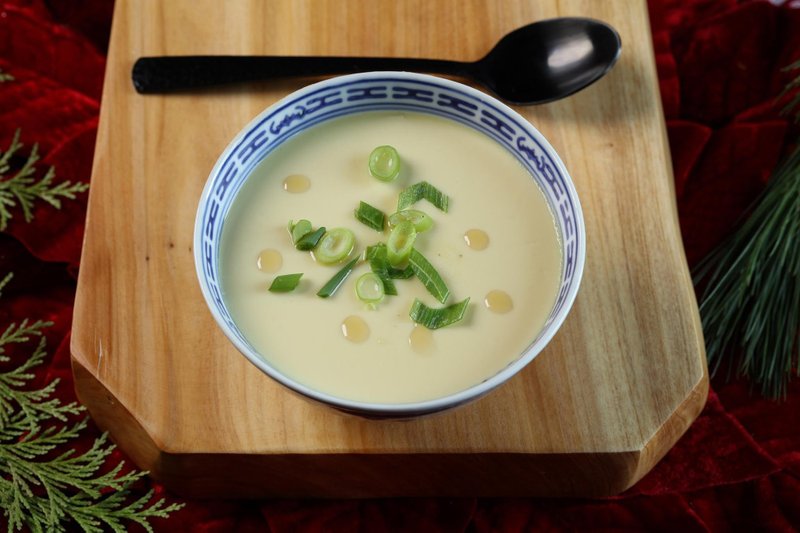 Popular in China and Japan, these easy steamed eggs are soothing for a tricky tummy and restorative on a wintry night. (TNS/Chicago Tribune/Abel Uribe)

We have navigated through the season of excess — those weeks between Thanksgiving and New Year's Day. Now we have arrived at the season of long nights and short days, as well as the season of the winter crud. This is the time of year when a stranger's sneeze on the bus can make us miserable within the week.

What we need at this time of year is a miracle dish.

We need something that can soothe the body when its calibration is off, whether from overindulgence or illness. Something that is nourishing and easy to prepare. Something inexpensive, yet immensely satisfying.

That thing, my friends, is the savory steamed egg. This is a recipe you're going to want to clip out and set in a convenient place for future use. It's so simple that after you prepare it a few times, you'll no doubt have it memorized. But until then? It's the only thing that decorates my refrigerator, held there by a souvenir magnet from some long-ago trip.

Popular as a snack in China and Japan, savory steamed eggs scratch an itch that their cousin, scrambled eggs, just can't reach. There's something about that delicate texture, and the lightly smoky flavor of its garnish of toasted sesame oil, that can't be beat.

This recipe specifies large eggs, and there's a reason for that. But other sizes can substitute with a minor adjustment.

To substitute another size for the large eggs specified (or to make multiple servings), beat the eggs in a large glass measuring cup, then use twice as much broth as eggs. Two large eggs would measure about 3 ounces, so you'll need 6 ounces broth. But two extra large eggs will be closer to 4 ½ ounces, so you'd need 9 ounces broth — just over a cup, in other words.

It's important to strain the egg-broth mixture before cooking, as that's what gives this easy custard its silky consistency.

I make this most often in my Instant Pot, because it's so quick and easy, and its even pressure cooks the eggs to a consistently perfect texture. You can cook this on the stovetop, too, and we've given instructions for both methods in the recipe below.

Beat the eggs in a glass measuring cup; whisk in twice their volume in broth. Pour mixture through a fine strainer into the bowl you'll cook in, deflating any bubbles on the surface. Let the mixture stand for 4 to 5 minutes to allow any remaining bubbles to rise to the surface; deflate any that do.

Wrap the bowl tightly in foil, so no moisture can drip onto the egg mixture as it steams. Fold another large sheet of foil to create a long strip — this will create a sling to help remove the cooked eggs from the steaming vessel.

To cook in a stovetop steamer:

Place a trivet or steaming rack into the bottom of the steamer; add water to a depth of 1 to 2 inches. It should not touch the bottom of the bowl. Add the foil sling, then center the bowl on the trivet with the sling beneath it.

Bring the water to a boil over high heat; reduce the temperature to a slow boil. Cover the pot and steam the eggs, 15 to 20 minutes. Remove steamer from the heat; uncover and use the foil sling to lift the bowl out of the steamer. Dress with sesame oil and green onion; serve while still hot.

To cook in an Instant Pot or other electric pressure cooker:

Place a trivet inside the cooking pot, lay in the aluminum sling, then set the cooking bowl on the trivet. (If your trivet has handles that aid removal from the pot, you won't need the sling.) Pour 1 cup water into the cooking pot, cover the cooker and seal; set to low pressure. Cook, 6 minutes. Allow pressure to release naturally; remove the eggs, dress with sesame oil and green onion and serve hot.