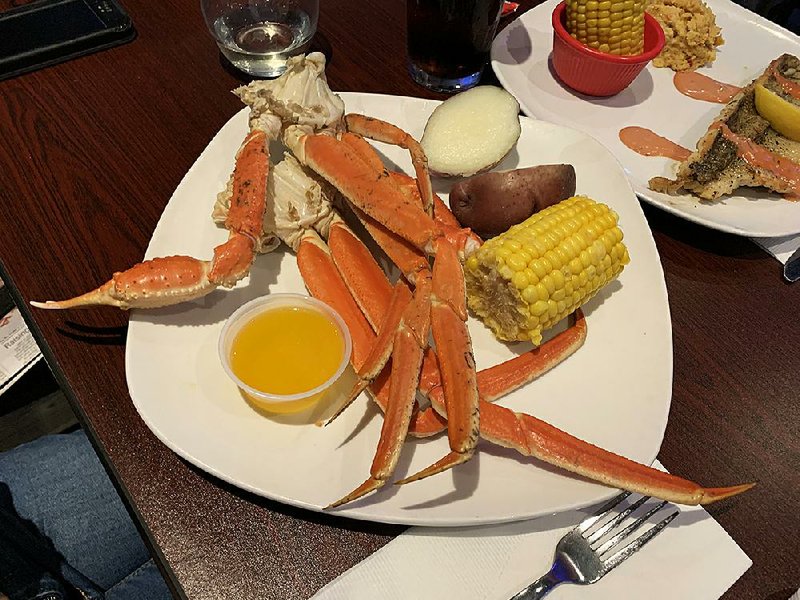 For years, on the ground floor of Lakewood House, a high-rise on North Little Rock's North Hills Boulevard, there was a sedate little tea room/quaint little dining space.

It started out life as the Victorian Tea Room. In the early '90s, then-owner-chef Margie Michell expanded the hours and menu and renamed it the Victorian Bistro. She sold it in 2014 to chef Eric Greer, who expanded the menu again and, shortly thereafter, changed the name to Garden Bistro.

A couple of years ago, Greer and his partner, Kyle Ray Dismang, after the successful debut of their North Bar in North Little Rock's Park Hill, converted it into a snappy 21st-century sports bar/seafood joint they called the Lakewood Lounge. They installed a dozen flat-screen televisions and a bar, changed the menu to full-service seafood with craft beers and added a lot of illuminated beer signs and a small toothy gator head that was pretty much the first thing you saw when you walked in the door. As we noted in our review at the time, "If they serve tea at all anymore, it's iced. Or hard."

A few months ago, new owners took the place over — Jim Greer, maybe related to Eric, maybe not — and the name changed to Lakewood Fish & Seafood House. Not much else has changed — the small toothy gator head has moved to the middle of the dining room, where, if you notice it at all, is less likely to be a shock. The TVs are all still there, lining the bar area and the upper part of the main wall of the dining room, most of them tuned to sports programming but also showing network sitcoms and even an ad channel. (Every so often a staff member grabs a remote and starts changing channels. That could be annoying if you've fixed your attention on, say a particular game, which all of a sudden is no longer on the screen you're watching.) A chalkboard up front still lists which brews are on tap, also reflected on a changeable slate on the tables alongside the wine list/cocktail menu.

It has become a nice, pleasant neighborhood gathering place in a neighborhood where most of the drinking and dining places are chains. Good food and decent friendly service are a big draw; many of the evening customers we encountered were regulars — to the point at which staff members know and greet them by name.

To our surprise, the place was packed, with a wait for tables (composite-topped, but with comfortable, sturdy metal chairs with attractively padded seats, possibly tea-room leftovers), not just on a Saturday night, as we might have expected, but on a weeknight as well.

We wanted to revisit the seafood chowder, which used to be called Coco's Seafood Chowder, now Lakewood Seafood Chowder (still $6.50 cup, $9.50 bowl), but the kitchen was out of it on our first visit and that night's potato soup special didn't particularly interest us. To our good luck and relief, it was back on the burner when we returned a few days later.

It's still more of a bisque than a chowder, rich and moderately spicy; unlike CoCo's version, however, which had plentiful and discernible — though not necessarily identifiable — fish and shellfish bits, this featured only little seafood specks. It's also a component of the Seafood Platter ($39), which also incorporates grilled or fried catfish, oysters, stuffed crab, crab claws, slaw, fries and hush puppies.

We highly recommend what the menu calls "Crab Cake" ($14), but which is still actually a pair of crab cakes, a house-made blend of lump crab meat and spices on a remoulade bed. They're almost entirely crab meat (just enough filler to hold it together and provide a pan-fried crust). The remoulade, alas, bore an unpleasant resemblance to Thousand Island dressing.

The menu still offers seven seafood entree baskets, most of which used to be fried; now, for most of them, there's the option of fried or grilled (shrimp, crab claws, alligator and chicken tenders; the exceptions are catfish and oysters). The seventh is a pick-two-item option.

Crab Legs (one pound, $20; two pounds, $34; three pounds, $48) are a regular menu item. On a recent weeknight, it was also a daily special served with a corn cobette and a split boiled potato. They were just about perfect — that's our opinion and also that of Intrepid Companion, our crab-leg expert. The just-right crab boil gave it flavor without overwhelming that flavor with spice. The legs themselves were relatively easy to access, meaning we got most of the meat out of the shells without having to engage in strenuous gymnastics (we did have to ask for a crab cracker toward the very end of the process to get inside a couple of the smaller pieces).

We revisited the walleye, getting it grilled this time, and it was excellent — firm, moist and with a slightly nutty flavor. We opted for corn "off the cob." which was, because it was being served on the cob with the crab legs, but the real find was the superb cheese grits, served in a little red cup — smoky, cheesy, nicely spicy and densely textured. (They're also available, as are all the other items on the expanded list of sides — fries (potato and sweet potato), mashed potatoes and gravy, fried okra, coleslaw, side salad, rice pilaf, collard greens, baked cabbage and sauteed brussels sprouts — a la carte for $3.)

Our Soft Shell Crab Benedict ($16), was, well, a little weird. A single buttermilk-fried soft shell crab rests, with a slice of ham, upon a toasted half of an English muffin, topped with a poached egg and a thin layer of hollandaise. It apparently had rested just a little too long under the heat lamp; the hollandaise was turning gelatinous and, though it had a strong lemon tinge, not much other flavor; the egg, too, was slightly overcooked. The soft-shell crab? Meh. The combination of the soft-shell crab and the ham? Meh, too. Thank goodness for the redeeming side of cheese grits.

Service was universally good on all our visits, though because the kitchen and wait staff was a bit overwhelmed, we did wait to have our orders taken; food came out of the kitchen relatively quickly, nonetheless. Everybody was friendly and helpful; members of management were on the floor checking frequently on how we were doing.