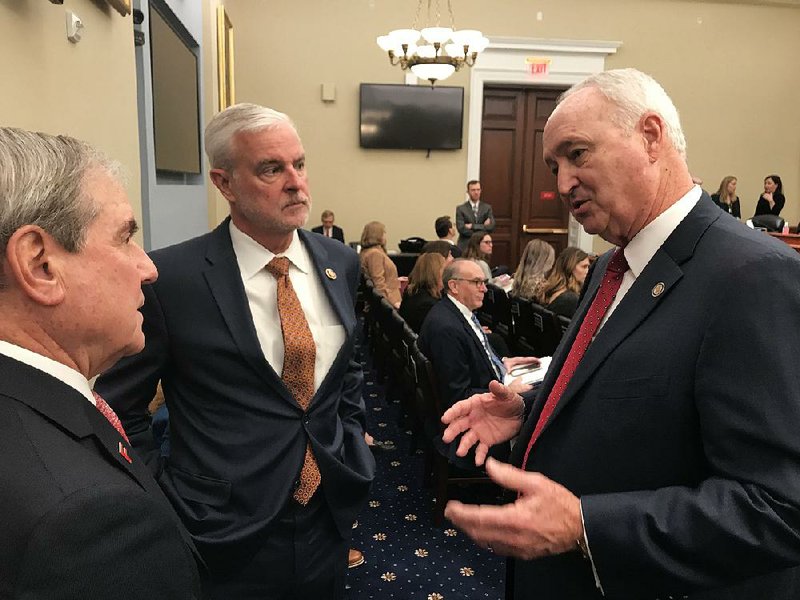 WASHINGTON -- Arkansas cannot and will not engage in deficit spending, state Department of Finance and Administration Secretary Larry Walther told the House Budget Committee on Wednesday.

That's because of a state constitutional amendment, approved in 1934, that restricts the ability of state officials to run up debts, he said.

Walther was testifying at a hearing titled, "Why Federal Investments Matter: Stability from Congress to State Capitals," but he opened his testimony with a short recap of Arkansas fiscal history.

As the state struggled to recover from the Great Flood of 1927 and the ravages of the Great Depression, it also was weighed down by enormous debts, due in large part to road-building projects, he said.

Eventually, the state defaulted on its debt.

"In simple terms, we're constitutionally barred from borrowing money without a vote of the citizens. Arkansas maintains a true balanced budget approach to funding state programs. We do not commit state dollars until we have those dollars in hand and available to spend," Walther said.

Restrictions on federal spending are less severe, a couple of lawmakers later noted.

As a result, the annual budget deficit approached $1 trillion in fiscal 2019, and the national debt has exceeded $23 trillion.

In Arkansas, the government pays its bills in a timely fashion and stores up reserves to guard against the unexpected, Walther said. But it relies on federal dollars to meet its obligations, he noted.

"In [Arkansas'] fiscal year '19, which ended in June of '19, federal dollars accounted for 29% of our expenditures," he told the committee.

Arkansas had $26.299 billion in total expenditures in fiscal 2019, Department of Finance and Administration officials say. Of that, $7.8 billion came from federal funds, they note.

All states rely on federal funding to meet their obligations, panelists told the committee.

That amounted to roughly one-sixth of the overall federal budget, they said.

Walther stressed the importance of federal funding, particularly when there's been a natural disaster or other emergency.

"I believe that the state-federal partnership is at its best in these times of need," he said.

During questioning, Walther stressed the importance of reliability and predictability. When federal dollars are lost, "it can be devastating" for programs in communities, he said.

When funding changes are under consideration, effective communication is crucial, he said.

"It's important that we work together, that we look eyeball-to-eyeball ... [that] you understand our issues and we understand yours and we work out a solution. That's the way it has to be done," Walther said.

Although the economy is strong, Arkansas' revenue is climbing and income taxes have been cut, the state has built a rainy-day fund so it's prepared to deal with surprises.

"Recession does not appear to be imminent. However, states are very well prepared. Their rainy-day balances are at an all-time high of 8% of general funds," she said.

"I could think of no better person to talk about the relationship between state government and federal government and the links between the two, particularly with regard to federal funding," said Womack, a Republican from Rogers.