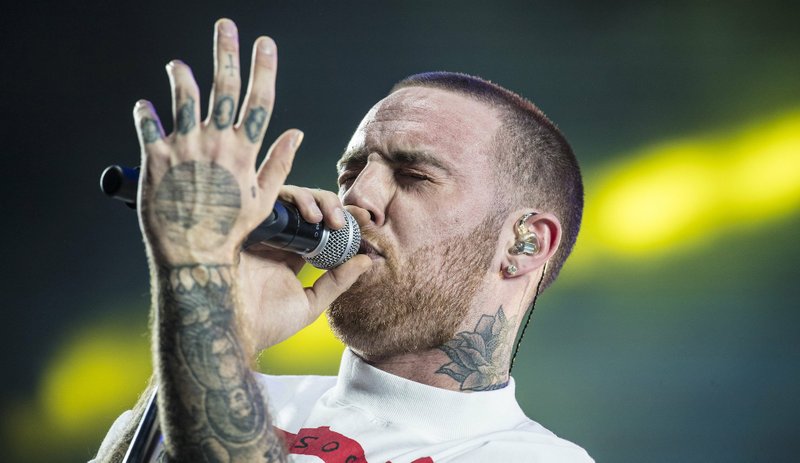 Malcolm James McCormick, aka Mac Miller, performs at the Coachella Music and Arts Festival in Indio, Calif., on April 14, 2017. The singer died in 2018, but his posthumous album comes out Friday. (Los Angeles Times/TNS/Brian van der Brug)

One of the tragic, practical challenges of this era in music is assembling a posthumous album for an artist who barely made it into his or her 20s. The teams behind Lil Peep, XXXTentacion, Avicii and Juice Wrld have already, or soon will, confront the job of deciding what to do with the demos, unfinished productions and troves of notes those artists left behind as guidance.

Sometimes there's an intimately connected guiding figure to oversee the new music, as was the case for Lil Peep and his mother, Liza Womack. Avicii had a tight team of collaborators and longtime intentions for disparate, genre-hopping records. For very young artists like 21-year-old Juice Wrld, deciphering their goals might be tougher — they were just starting their careers and hadn't yet charted a definite path forward.

Mac Miller's new album, Circles — due out Friday — will likely be a different sort of posthumous record. Miller died in 2018 at age 26 in Studio City, Calif., from an overdose of fentanyl, cocaine and alcohol. He'd already established himself as a generationally significant artist, with five studio albums (all top-five Billboard hits) and a cadre of artists like SZA, Chance the Rapper and Travis Scott who cited him as a major artistic or career influence. At a 2018 tribute concert for Miller at the Greek Theatre, scores of A-listers performed his music, and fans drove thousands of miles to pay homage to an artist they grew up alongside.

Miller's 2018 album Swimming came out just a month before he died. Miller had already matured from a precocious, slightly fratty millennial favorite into a multi-instrumental polymath and songwriter respected by peers like Thundercat and John Mayer (each collaborated with him), and increasingly influenced by contemporary jazz and '70s soul. His 2016 LP The Divine Feminine showcased his growing sensitivity and introspection as a lyricist (its romantic/spiritual themes tied into his relationship with then-girlfriend Ariana Grande), and Swimming saw him reckoning with both his self-destructive impulses and charting a better path forward.

Miller sadly wouldn't live to see those next steps. But one particular collaborator would. Jon Brion, an LA composer who has helped shape albums and soundtracks from artists as diverse as Kanye West, Fiona Apple and director Paul Thomas Anderson, had started to work with Miller on Swimming, which unbeknown to most fans, was intended as the first half of a double album rooted in contrasting aesthetics.

In a statement posted online Wednesday, Miller's family said, "At the time of his passing, Malcolm was well into the process of recording his companion album to Swimming, titled Circles. Two different styles complementing each other, completing a circle.

"This is a complicated process that has no right answer. No clear path. We simply know that it was important to Malcolm for the world to hear it ... . We are left to imagine where Malcolm was going and to appreciate where he was."

While Peep and Avicii's final works relied on multiple collaborators, Brion, according to the family's statement, "has dedicated himself to finishing Circles based on his time and conversations with Malcolm." The weight of that task — finishing a record by a young but veteran act just coming into his full powers — is daunting. If anyone could have taken on such a job, it's probably Brion. A fixture in LA pop and the avant-garde since his beloved roundtable jams at the club Largo in the early 2000s, he has enjoyed a long career of bringing intricate, cinematic textures to artists like West (Brion won a Grammy for producing Late Registration) and his outsider pop sensibilities to films like Eternal Sunshine of the Spotless Mind and Lady Bird.

Swimming, though lush and handsomely performed, was still grounded in Miller's hip-hop roots. So if Circles indeed draws more heavily from Brion's talents, it will be a fascinating companion piece in Miller's catalog, and maybe one that puts his live musicianship and arranging skills front and center. Brion's management did not immediately return requests for comment, and Miller's team declined an interview.

So far, the posthumous albums from Miller's young peers have been attempts to tie up loose ends or to offer suggestions about where their art might have taken them if their lives had not been cut short by drugs or violence or depression. In the streaming era, for late artists with big caches of unfinished material, releases can continue for years. Posthumous albums from classic (and prolific) acts like Elvis Presley and Tupac Shakur have become a significant business for labels (and a part of why publishing catalogs are such lucrative assets).

Circles might be something else — a clear and complete album that belongs in the core catalog as much as the LPs that made Miller's reputation. It's rare to have such a veteran collaborator on board to oversee the process — the job is more often left to family, a record label or a range of peers working song-to-song.

But Miller was an album artist, with escalating ambitions and concepts for each record. In hindsight, given the circumstances of his death, Swimming was even more harrowing for how optimistically it dealt with Miller's struggles with drugs and finding peace in the pop spotlight. It seemed to show a light at the end of that cave. On "Self Care," he sang, "It must be nice up above the lights / And what a lovely life that I made, yeah / I know that feelin' like it's in my family tree, yeah ... Tell them they can take that bull**** elsewhere / Self care, we gonna be good."

In just a month, Swimming went from a portrait of hope and redemption to a document of loss, one made even more poignant because its optimism didn't last. Perhaps Circles will deepen or complicate or conclude the path to recovery that Miller so wanted to continue on. If it lives up to the vision that Miller had laid out on Swimming, it may be a clearer, more intentional and valedictory statement piece than most.