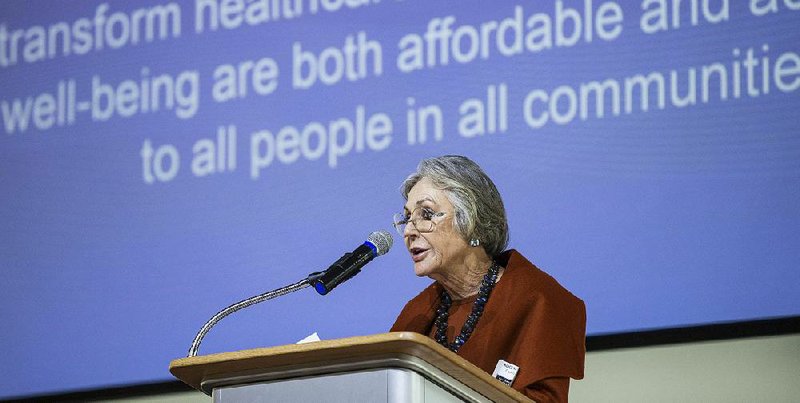 BENTONVILLE -- People should tell their doctors their fondest dreams instead of their current aches, pains and problems, according to people launching the new Whole Health Institute in Bentonville.

Walton announced Wednesday that Dr. Tracy Gaudet, formerly of the U.S. Department of Veterans Affairs, will lead a new institute with the mission of changing the approach to health care nationwide. Gaudet will enlist a team to refine, implement and then expand a more dynamic, motivated approach to health care, Walton and the doctor told an audience of about 180 people at the council meeting.

Schedules, locations, costs and other details about the new institute will be revealed later, Gaudet said.

The Northwest Council held its winter meeting Wednesday at Crystal Bridges Museum of American Art in Bentonville. Walton, who is a Walmart heir, founded the museum, is the chairwoman of the museum's board and board member of the Walton Family Foundation. She is also a past president of the council and, indeed, was its first president.

The full title of the new institution is the Whole Health Institute and Chopra Library, Walton told the group. Dr. Deepak Chopra, a philanthropist and doctor, is a longtime advocate of goal-oriented approaches to health. He held his "Sages and Scientists 2019 Symposium" at the Crystal Bridges museum in November.

"Chronic conditions account for 75% of all U.S. health care costs," Walton said. These conditions -- such as heart disease and diabetes -- could be prevented or mitigated by changing behaviors, Walton said. Her hope is the institute will lead to better lifestyles in Northwest Arkansas and, from there, spread to the rest of the United States, she said.

To illustrate the institute's approach, Gaudet spoke about a patient with a chronic health condition who was treated for years. The patient heard Gaudet talk about taking a more active, goal-oriented approach to health care. The patient then told her doctor that in two years' time she wanted to climb Mount Kilimanjaro, a 19,341-foot peak in Africa.

That goal was no miracle cure, Gaudet told the audience. It took a disciplined course of treatment and a lot of hard work to reach -- but the patient did reach it. The patient's health also improved greatly, Gaudet said.

Gaudet was at Wednesday's meeting with team members Amanda Hull and Dr. James Marzolf, who presented findings from their use of similar approaches with the Department of Veterans Affairs' National Office of Patient Centered Care and Cultural Transformation.

Department patients in the "whole health" program showed a 24.4% reduction in costs in a year compared with a 6% increase for the department's patients overall, according to findings presented by Marzolf.

Cooperation with area health care institutions and providers will be vital, she said, as will cooperating with businesses that have their own insurance plans covering their employees.

Aside from better well-being for people, Gaudet said, national and economic interests demand change. "We will no longer be globally competitive if we don't get control of health care costs."

Kelvin Parks, director of the Veterans Health Care System of the Ozarks, was at Wednesday's council meeting and vouched for Gaudet's approach. He met Gaudet in 2010 in Chicago while he was working there at the Veterans Affairs Department, he said.

Gaudet's approach worked for patients there and is working in the Ozarks system, he said, adding that it also worked for him. "I had a daughter who was getting married and [had] a goal of walking her down the aisle without a limp after surgery. I told my doctor I wanted to do that and that was our goal. I wanted people to see her, not me limping."

Raymond Burns, president of the Rogers-Lowell Area Chamber of Commerce, said after the meeting that Walmart's plans for a more open headquarters follow many of the same themes that the wellness center will promote. The greenway is a walking and biking trail, which is an example of the healthier lifestyle that the region is embracing, Burns said.

Bartlett said Walmart is seeking to create more of a college campus feel with its new headquarters rather than a corporate atmosphere.

Former state Sen. John Brown of Siloam Springs said after the meeting that Walmart's loyalty to the Northwest Arkansas community is shared by many area companies and people, making it one of the best things about representing the region in the state Legislature.

"Apple Inc. had a national competition for a headquarters," Brown said. "Walmart knows where home's at."