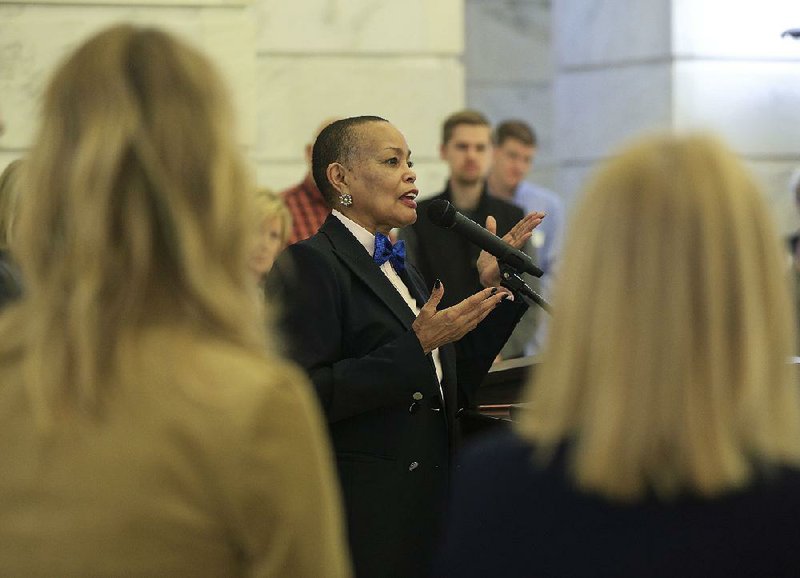 State Sen. Joyce Elliott, D-Little Rock, speaks Thursday in the Capitol rotunda during the kickoff of her campaign for the 2nd Congressional District. Elliott is running against U.S. Rep. French Hill, a Republican from Little Rock. (Arkansas Democrat-Gazette/Staton Breidenthal)

Sure, the Little Rock Democrat said she'll talk a lot about health care, education, criminal justice and "sensible" gun laws, but she said her main focus will be broader: quality of life.

"Life is more important than three things, but they all add up to quality of life," she said Thursday.

Elliott, a longtime state lawmaker who ran unsuccessfully for the 2nd Congressional District seat in 2010, officially opened her campaign with a rally Thursday at the state Capitol.

The U.S. House seat representing Central Arkansas has been viewed as Democrats' best shot at regaining a spot in the state's congressional delegation, but Elliott faces an uphill battle against Hill, a three-term incumbent with a sizable fundraising advantage. Independent Joseph Glenn Smith II of Conway also is running for the seat.

Tucker's campaign was well-financed, and the race attracted attention from national groups linked to both parties.

Hill plans to continue to campaign on issues that are most important to his constituents, campaign spokesman J.R. Davis said Thursday.

"Congressman Hill is going to continue to champion the issues that Arkansans care about, especially those in Arkansas' 2nd Congressional District," Davis said. "That includes supporting sound economic policies that foster jobs and economic opportunity right here in Central Arkansas, a strong and resilient national defense and a better quality of life for every citizen in Arkansas' 2nd Congressional District."

Elliott, wearing a cerulean blue bow tie, promised Thursday to campaign hard in all seven counties and hold town hall meetings in each.

She said health care is the primary concern she has heard from voters in the district. Since she lost in her race for the seat in 2010, Elliott said she has gained a better understanding of how politically divided the country is. She said she also has a better understanding of climate change and the "raw emotions" surrounding firearms legislation.

She told Thursday's crowd that she grew up in Nevada County around hunting and guns.

"We had guns in my family the whole time I was growing up," Elliott said. "They were not there for safety necessarily; they were there for hunting. It grieves me that we simply can't sit down and have a thoughtful, respectful -- I do mean respectful -- conversation about what can we do to stop the carnage in our country that is the result of having guns almost everywhere. This is nothing to demean anybody. I'm talking about my own heritage."

As a state representative and state senator, Elliott has placed the majority of her focus on education as one of the loudest supporters of public schools and teachers in the state Capitol. She is the vice chairman of the Senate Education Committee and the chairman of the Arkansas Legislative Black Caucus.

Hill was the founder, chairman and CEO of Delta Trust & Banking Corp. before running for Congress in 2014. On Capitol Hill, much of Hill's focus has been on financial issues. Hill serves on the Republican leadership team for the House Committee on Financial Services, and he is the ranking member on the National Security, International Development, and Monetary Policy Subcommittee.